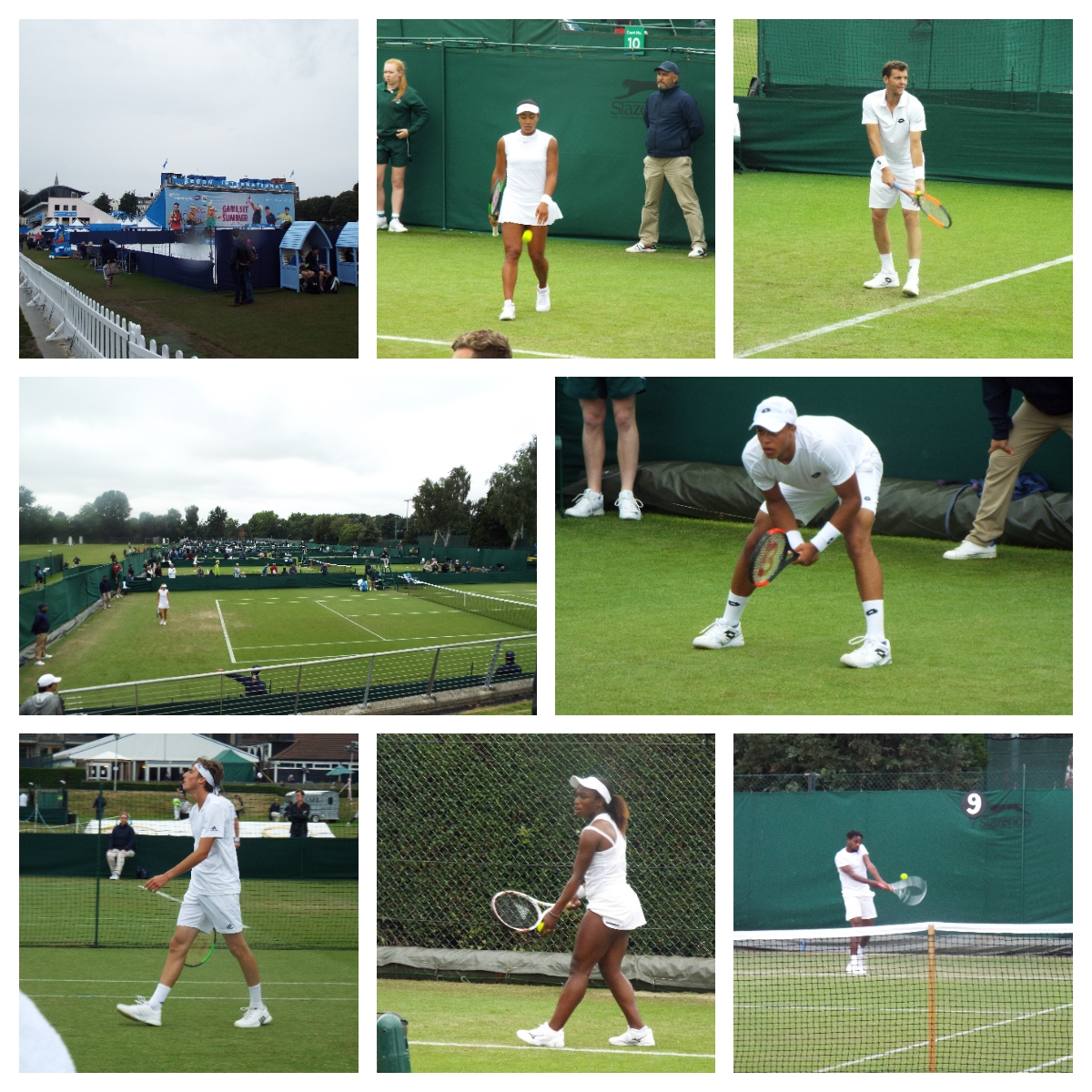 WOW, eventful few days! It started on Tuesday with a trip to Devonshire Park in Eastbourne, the forecast had been looking miserable for days before and annoyingly it obliged! One of those days where it tends to just ‘spit’, very annoying in terms of grass court tennis. We went as a group of 5 and had booked tickets for court one, where we were due to see Halep, Querrey, Gasquet & Wozniacki v Naomi Osaka for 30 notes! With barely 15 minutes of play we will get a full refund but sadly this is the chance you take with the glorious British weather! We sat around for a while, drank a bit of champs, complemented by a salmon bagel (I went with a bunch of food and drink judges, very nice), followed by a few more drinks and a cheeky picture with Naomi Osaka. Naomi has certainly done me on the stunting front! Fan! The rest of the day consisted of looking at the heavens from a nearby pub where yet more alcohol was consumed. Plenty of top draw banter, which of course is priceless but it was never going to be live tennis on Tuesday and we took our medicine (vodka was mine)! I have been to Devonshire Park on several occasions previous to this and can honestly say I have enjoyed the tournament on each visit. The courts are close and intimate, there is a laid back vibe and always good tennis on offer. The entry list, especially for the women’s event is always top draw. Nobody’s fault but this year just wasn’t meant to be. Always decent to have a drink with a few pals though!
It made me cautious about getting too fired up for the following days trip to Wimbledon qualies at Roehampton but this has been my favourite day so far, unquestionably! That is based on tennis alone as the company has been with top level operators each time! I am a bit of a tennis geek, let’s face it. I think like a pig in shit is the right phrase! £5 for tickets, best ever! A sea of matches before you, a superb atmosphere that comes with players and their entourages wanting victory so much, you can smell it, it is serious business on court. You could see and hear Benjamin Becker smashing his racket after losing to Marchenko, screams of pleasure and anger all over the place from other courts. It’s a reminder that if your not in the top hundred how imperative it can be to win!Quite literally tears of joy and anger at times. This is tennis at its most real and why I fell in love with the sport as both a fan and a player back in the day! Off court, spectating players and the general public are relaxed but nothing wrong with a bit of vocal support if you want to get involved, I can be active in this area myself, just as it should be! The requirements for the day were pretty much victories for Jay Clarke, Sachia Vickery, Alison Van Uytvanck, Francoise Abanda, Stefanos Tsitsipas and Darian King all of whom did just that. Destanee Aiava is now on my tennis radar having not known too much apart from the name previously and the odd google image, very impressed with her game! It would have been nice to see Maia Lumsden get over the line against the more experienced Barbora Krejcikova but she fell just short, not bad though all in all. Even a bit of a bonus by seeing bits of Rublev, Polo Mathieu and Taylor Harry-Fritz. The only problem is you can’t be in several places at one time with so many matches going on, probably why I’m in my element as well though. I ended up missing pretty much all of Willis v Broady and due to our negative approach to the weather, Abanda and AVU had already got the jobs done before we arrived.  First on and not hanging about! Fair play. The food was decent onsite,  the prices were certainly reasonable for a sporting event and drinks were on the cheap end (a bottle of Corona/Peroni was £4.10). To complete the geeks day out I added to my dossier of pictures with players. Now I have to say that on reflection everyone was spot on. Jay Clarke, Tommy Haas and Stefanos Tsitsipas, in particular, went past the call of duty with bants and chat. Lads! Clarke is a genuine dude and I’m a big fan of this lad, great attitude too! Taking out Elias Ymer was a big win for the 19-year-old against an ‘ATP #nextgen player’, don’t underestimate that! Nick Kyrgios has got some flack of my pals as ”he doesn’t look interested” but on reflection, the bottom line is Nick is just Nick, he’s just real. Obviously, Haas or Kyrgios aren’t even playing at the qualies so they would have both been within their rights to tell me to ‘do one’ in my opinion. So for one reason or another (all my fault), I haven’t added Abanda, AVU, Aiava or Darian King to my select wish list. I’ve actually been lucky, Sash Vickery was spot on at Surbiton as were Evo, Glasspool and Dustin Brown! It hits back at people who say players aren’t fan friendly!Chances are limited at Wimbledon so I might struggle on that front to add to the collection.
Big thanks here has to go out to Ben Rothenberg who kindly pointed out I’d dropped my rizla, top form that lad, my pals were buzzing about it! Could have been in all sorts of trouble without them in fairness!

Big two weeks ahead with a blog from SW19 to follow! 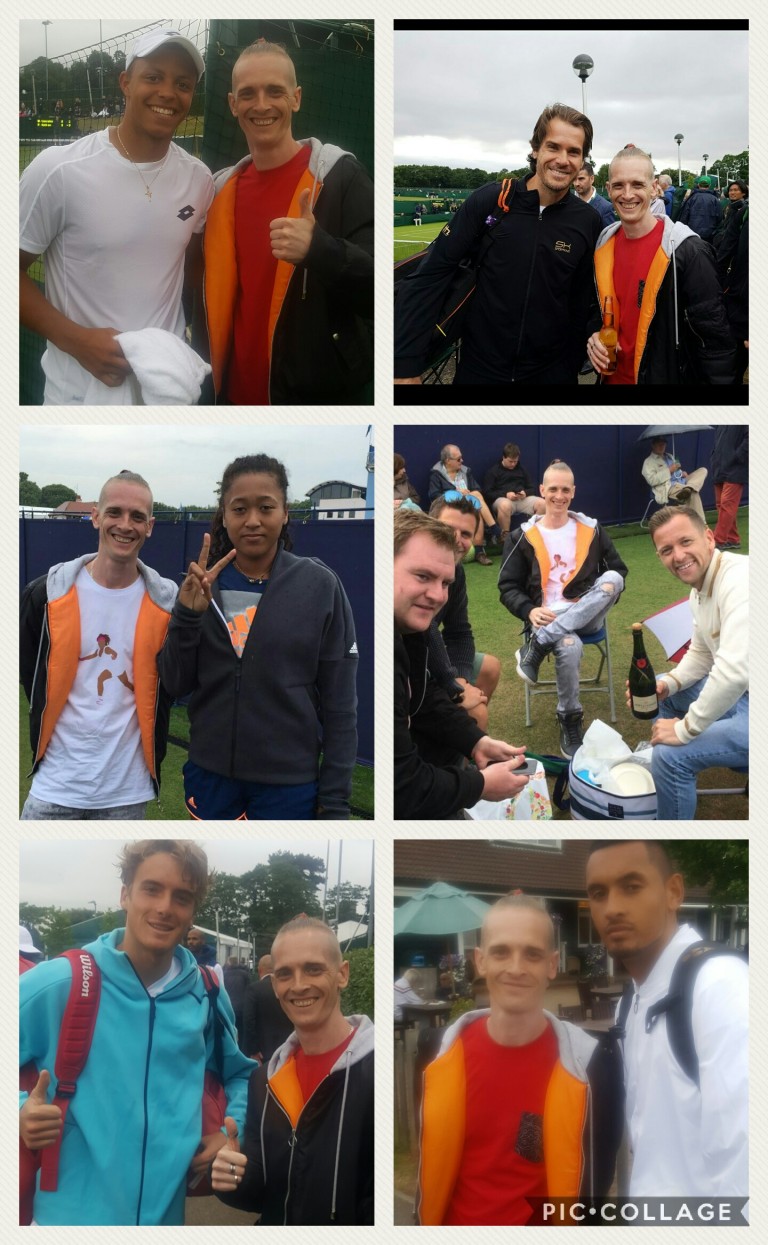