To take any biased views out of this I thought this made a lot more sense and it gives it a slight spin on my ’10 Male players with bang on swag blog’. I am sure people will disagree with some of my choices/omissions but that is the beauty of an opinion! Instead of doing a list of ‘special mentions’ like in the men’s I have added two ‘wildcards’. The three who just missed out in this ultra-competitive heat were Beth Mattek-Sands, Vika Azarenka and Elina Svitolina all of whom have strong claims! 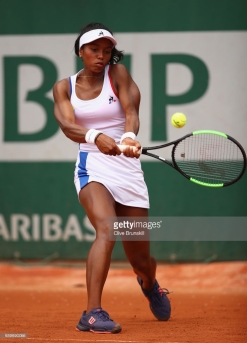 ((WC’s) Seven Oral and Tessah Andrianjafitrimo  (right)  – The beauty of my job over the last 5 years has been that I have got to see ITF order’s of play on a daily basis and increased my knowledge of the game. On seeing a new name you can often do a quick google search, a glance at social networking pages shows you that both the 25-year-old and 18-year-old have got it going on! (pic taken off Instagram @sevenoral).

(10) Polona Hercog – The 26-year-old Slovenian has tattoos on both arms, including a sleeve on her right arm. Polona looks on point, no two ways about it, apparently a fan of surfing and snowboarding, just upping her swag a little more. An exciting game on the eye with a big forehand, sadly she has been blighted by injuries throughout her career. 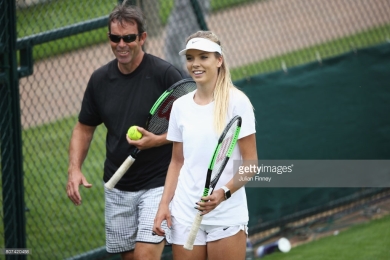 (9) Katie Boulter – 21 and from Leicester, Boulter’s results are improving and she was very unlucky not to beat Christina McHale at Wimbledon this year.  Quite clearly a player who has the looks, decent dress sense and an aura to pull it off!  It is all very well to have the looks, but have you got the confidence to back it up, Ms. Boulter has IMO! 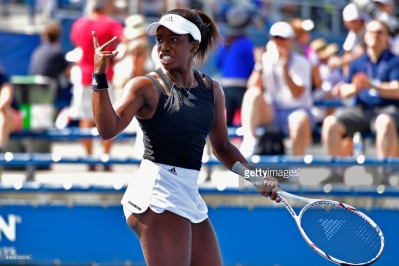 (8) Sachia Vickery – For me, Sachia definitely has something about her. At 5 ft 3, she plays with a gutsy/never say die attitude and I like a scrapper, Still only 21 is Sach and she was very, very unlucky not to reach the last 32 of the U.S Open.  The American has the looks and physique for me and is one of my favourite players on tour!  Could easily be higher on the list!

(7) Caroline Wozniacki – The 27-year-old Dane is a favourite amongst most, wherever she plays, Caro is popular. A hustler, whos game ensures that has fans get behind here. Wozniacki comes across as a genuine, fun kind of person. with good looks and a banging dress sense. As a fellow Liverpool fan, she gains, even more, brownie points for me! Great moment when she wore the LFC shirt in Qatar 2011, YNWA Caroline!

(6) Naomi Osaka – She loves a ‘stunting’ pic on Instagram (nothing wrong with that), it goes a long way. A big power game that can blow opponents away. Born to a Haitian father and Japanese mother, she is a good looking gal! A kl image and a presence both on and off court by the looks of things. Unbelievable to think she is still only 19!

(5) Coco Vandeweghe – I keep saying you have to be a Coco fan. Coco even walks around the court with an unmistakable Swagga and confidence. All out attack, power play tennis that keeps you on the edge of your seat, that’s Vandeweghe. Great value in her interviews and press conferences, she is certainly not frightened to speak her mind! Prime time stuff and I love it! At 25, Coco will be strutting her stuff for years to come with deep runs in the slams now expected.

(4) Sloane Stephens – Could easily be higher, I’m a big Sloane fan as my mates will testify. The U.S Open has little bearing on matters as Stephens was always up here! An awesome game to watch, with power, subtly, movement and plenty of fight. She also comes across as an approachable personality, that has plenty of cheeky banter.  The 24-year-old is quite simply fit as well, my, she is hot!! For all these reasons Sloane has got it going on big time! The world is now her oyster!

(3) Venus Williams – No surprises in Queen V being here, I don’t really need to justify this do I?? The two names side by side says it all! Like in the men’s, where Tommy Haas has moved with the times, Venus has done the same over the decades in the women’s. However, with no disrespect to Tommy, Venus has won more titles and is virtually immortal, yet she is still hungry at 37! I look up to her in total awe!  She holds herself like the champion she is and she graces the court with an air of class. Venus pretty much has it all! She is also a well-liked personality with total respect across the board! Iconic! Roll it gal!

(2) Dominika Cibulkova – It is amazing how many of my pals, both male and female ask me “who is this” when they first glance eyes at Dominika, and that says a lot. For this reason, she makes number 2, Dom’s look and physique stand out.  At 28, and standing at 5 ft 3 like Sachia, she carries herself with a confidence and plays with a grittiness that fights against the grain. Already a grand slam finalist and winner of last years end of year tour championships, she can play!  A flashy game that is entertaining to watch, with quick court coverage and scorching winners!

(1) Francoise Abanda – I obviously follow Francoise on Instagram and let’s face it as a dude you happen to notice exceptionally ‘fit’ pictures of women when you are scrolling down your feed! It’s natural right?? Frankie stands out for me, Abanda can also dress and that is a big part of swag for me! She is making her way up the rankings after having a promising junior career.  At 5 ft 10 she possesses a massive forehand that can cause some serious damage, there is definitely a presence there with the 20-year-old Canadian, who is very popular on home turf already.  The aura is only going to grow! Go on Frankie!!!

One thought on “10 Female Players with Swag- Without Serena!”