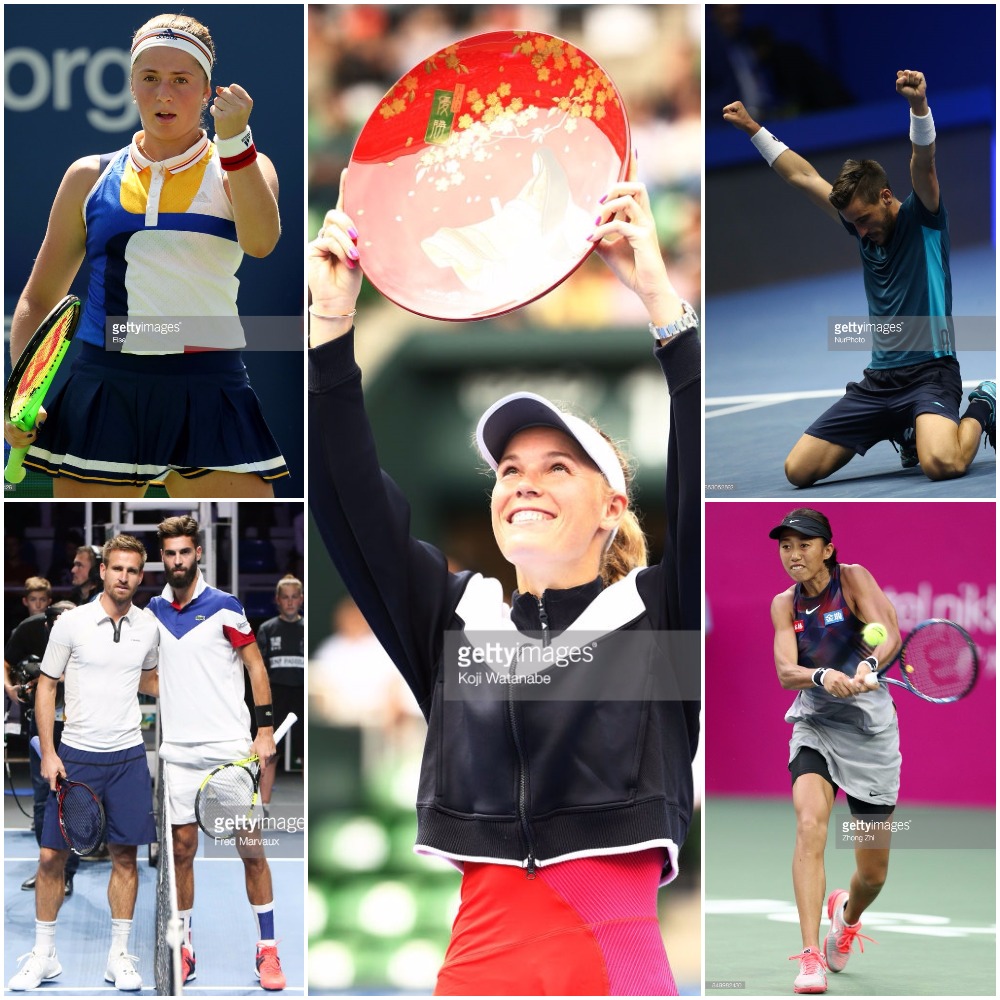 I was really impressed with Caro this week. She survived early scares against Shelby Rogers and Dom Cibulkova (where she saved match point), then really stepped it up against Garbine Muguruza and Anastasia Pavlyuchenkova in the final in Tokyo.  She was flawless in the last two rounds and didn’t even remotely look like getting broke in the final. Off the ground, you can certainly see she is trying to be more aggressive but she still remains exceptionally solid. Very pleased for her and it’s her third title in Tokyo, defending her title from last year. Pavlyuchenkova had also found herself in trouble several times during the week, going the distance in every round and blasting her way through it, except for the final against Woz, who was just too good! Angie Kerber made progress, beating her first top 20 opponent of the year in Karolina Pliskova and making the semis before running into Pavy!

Jelena Ostapenko claimed her second tour title (RG being her first) in Seoul. The top seed breezed through the first two rounds before being tested by both, qualifier Luksika Kumkhum in the semis and Beatriz Haddad Maia in the final. She dropped the first set on both occasions but responded by hitting her way through, her all-out style winning the day in the end. Haddad Maia had a breakthrough week on the main tour. She hits a very heavy ball does the lefty and she is only going to get better, being only 21 herself! The top 50 is well within sight for the Brazilian! Defo worth keeping an eye on her!

Shuai Zhang won in Guangzhou, dropping only 3 games on her way to the semi-final before beating Evgeniya Rodina in straight sets and the in-form Aleksandra Krunic in the final in 3, it is her second title here. Anett Kontaveit surprisingly got beat by Lizette Cabrera in the second round as did top seed Shuai Peng, who lost to Yanina Wickmayer!

Peter Gojowczyk won his first tour title in Metz at the Moselle Open! He beat Benoit Paire in the final.  The German only dropped a single set all week having got through qualies. Paire had looked in decent nick during the week having beat David Goffin. There were early losses for Gilles Muller and Lucas Pouille after top seed Pablo Carreno Busta had withdrawn with a hand injury!

Damir Dzumhur also won his maiden title in St Petersburg beating Fabio Fognini to land the crown. Dzumhur could and probably should have gone to Liam Broady in the quarter’s but he got away with it! Brit, Broady can be very pleased with his efforts this week, making his first appearance in the last 8 on the main tour having got through qualies! Dzumhur has been in the form of his life since August and is the first player from Bosnia and Herzegovina to capture a main tour title! Top seed Roberto Bautista Agut lost to Fognini in the semi’s and second seed Jo-Wilfred Tsonga lost to Jan-Lennard Struff in the last 8!

I won’t actually claim I got to watch much of the Laver Cup, as I had my sleep pattern on Asian time, but it seems it was a success! Federer and Nadal playing doubles together will get a lot of people buzzing, obviously! Team Europe ran out 15-9 winners against Team World, in the Ryder Cup-style tennis event! Federer and Borg looked to be enjoying the champagne out of the cup after winning! Fair play!

On a final note, I had a small stakes bet (accumulator) on the outright’s at the start of the last week. My selections included Haddad Maia (25/1), Fognini (16/1), Wozniacki (8/1) and Benoit Paire (25/1). Had they all have won on Sunday I probably wouldn’t have had to work for quite some time again! So close but yet so far! A good effort from all concerned though, they gave me a decent run!