First of all, there are several keys changes to the format of this event. The ATP are trialling live electronic line calling, as Hawk-Eye Live makes its debut, meaning that the Umpire will be the sole official on court. There will be no need for challenges as a result on the indoor hard courts of Milan!

With this in mind and Alex Zverev’s withdrawal, the runners and riders are as follows:

(1) Andrey Rublev – What a breakthrough season the Russian has had! Winning his first main tour title as a Lucky Loser in Umag, reaching the quarter’s of the U.S Open (lost to Rafa) and making the last 8 in both Halle and Beijing. Victories over Dimitrov, Goffin, Berdych, Fognini, Sock and Dzumhur in this period show the fire-power the 20-year-old has at his disposal!

(2) Karen Khachanov – The second Russian in the field! Khachanov made the last 16 at the French (lost to Murray) and the last 32 at Wimbledon (lost to Nadal). A semi-final appearance in Halle, where he lost to Federer was mixed with several quarter-final showings. Victories over Goffin, Isner and Berdych show how his big game can cause problems to most!

(3) Denis Shapovalov – This lad has done so well to put the Davis Cup incident behind him and let his tennis do the talking. Challenger titles in Drummondville and Gatineau were the initial highlights, but it ‘went off’ from Montreal onwards for the 18-year-old.  Making the semi’s at his home event with victories over Del Potro and Nadal was followed up by a last 16 showing at Flushing Meadows, which included a straight sets win over Jo-Wilfred Tsonga! Top notch!

(4) Borna Coric – Winning his first tour title in Marrakech on clay beating Schwartzman,  Ramos-Vinolas and Kohlschreiber en route and also making the quarter’s in Madrid,  defeating Murray on the way. Wins over Thiem and Isner added to the list of scalps, as did the victory over Sascha Zverev in the second round of the U.S Open for this plucky Croat! Big time player!

(5) Jared Donaldson – Meant business from his very first event of the year, ousting Gilles Muller and taking Nishikori the distance in Brisbane! He made the last 16 in Miami, the third round at Wimbledon and the quarter-finals in Cincinnati and Chengdu. The American has also had wins over Lucas Pouille and Roberto Bautista Agut.

(6) Hyeon Chung – A quarter-final appearance at Barcelona (lost to Nadal) and a semi-final in Munich was backed up by reaching the last 32 at the French Open. The Korean missed the next two months with an ankle injury but from what I have seen is playing himself into some form again. Wins over Sascha Zverev, Monfils, Goffin and Bautista Agut over the course of the season. I have to say Chung is probably my outside tip for the event right now! 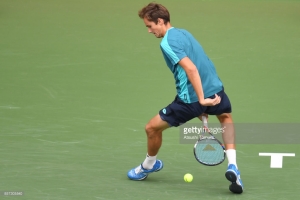 (7) Daniil Medvedev – The third of the Russians in the field, Daniil has made his own impact this season though! Making the final of Chennai in his first event of the year gave us a taste of what was to come. Six additional quarter-final outings and a semi-final showing in Eastbourne completed a year for Daniil that included beating Stan Wawrinka at Wimbledon. The Russian has got most of his results on faster surfaces this year and has also beaten Dimitrov and Querrey.

(8) Wild-Card (TBA) – The top 8 Italian under 21’s will go head to head for this final berth! Matteo Berrettini is the favourite, the Italian has won one Challenger event this season and reached three further finals at this level, where he has predominantly plied his trade so far! The WC event is held this weekend (3-5th November) with the winner taking his place alongside the above!

One thought on “The Runners & Riders for Milan’s Next Gen ATP Finals!”