A quite incredible week unfolded in Bercy, that culminated with Jack Sock clinching the title and the final spot at the ATP Tour Finals in London! The American started the week at number 24 in the list and ended it in 9th (Wawrinka’s withdrawal for the season means he jumps a spot). It was drama of the highest order for that all elusive final spot which went right down to the wire. Poor Pablo Carreno Busta, who was perched in the final spot was on ‘squeaky bum’ alert all week after his early loss to Nicolas Mahut. The Spaniard has been out of sorts since the U.S and I’m sure he will admit his form hasn’t been good enough to make London by the end of it. It has after all been in his own hands for weeks!

Federer withdrew pre-tournament, Rafa did his knee in his third round match against Pablo Cuevas and despite getting through this he withdrew prior to his quarter-final match with Filip Krajinovic! Sascha Zverev, Dominic Thiem, Grigor Dimitrov and David Goffin were all beat by the last 8! This meant Marin Cilic was the only top 8 seed to appear in the quarter-finals and he was beaten there by Wildcard Julien Benneteau. The 35-year-old Frenchman playing in his last Bercy (he’s looking to retire after Wimbledon next year currently) rolled back the years and some, with victories over Shapovalov, Tsonga, Goffin and Cilic, it was great to see as the Parisien crowd get right behind him! He had little left in the tank against Sock in the semi-final, having lost a tight first set, where both players exchanged breaks several times, he went down 7/5 6/2. Sock had already beaten Kyle Edmund in a final set breaker and more importantly an in-form Lucas Pouille and Fernando Verdasco, these were both huge wins in the context of the event! 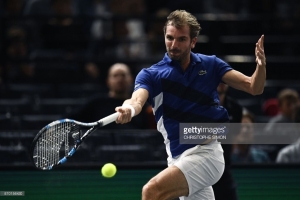 In the top half, Juan Martin Del Potro became the favourite to take the final spot in London with Nadal’s withdrawal, but he ran into John Isner who had beaten Schwartzman and Dimitrov on the way! Isner was one of the few arrows I threw this week and I was on him at 50/1 each-way! He entered the semi’s as the tournament favourite, but he, I’m sure will be more disappointed with his performance than I was! This was a great opportunity for a first Masters Series title! He started slowly against Krajinovic and then having worked his way into it and found himself 3-0 up in the final set breaker, he then saw his opponent flash a couple of returns at his boots laces! It was not the level the American had performed at all week, with these courts really suiting his game in Paris! Krajinovic was not overawed by the situation having got through qualies and had wins over Sugita, Querrey and Mahut en route.

In the final, both players were suffering from slight nerves as you would expect! Krajinovic found a way to take the opener 7/5, he really played well under pressure at several moments last week, but Sock upped his game thereafter, taking the next two sets 6/4 6/1. The American flashing winners of both sides to ensure finishing the year as top American and giving himself a shot at the O2 as a result! 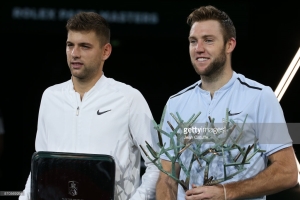 In Zhuhai, Julia Goerges went all week without dropping a set! It has been a great year for the German, who had lost in several finals over the season but now boasts back to back titles at the end of 2017! Winning in Moscow and performing so well against Daria Kasatkina in the final in Russia has given her that swagger and confidence back! Remember, Goerges hadn’t won a tour title since 2011! This was a strong field in China that boasted 12 of the worlds top players ranked 10-27! Vandeweghe, Mladenovic,  Stephens, Kerber, Barty, Pavlyuchenkova, Sevastova… this was ultra competitive! Four groups of three was the format, with the winner of each group making the semis.

Goerges beat Anastasija Sevastova 6/3 6/3 and then Coco Vandeweghe 7/5 6/1 in the final!  Vandeweghe had been flawless after losing the opening set in the groups against Shuai Peng and had looked particularly impressive in dispatching Ash Barty 6/3 6/3, in their semi-final. Barty herself had looked in good form once again, but Coco was hitting consistently and ferociously! Vandeweghe led 5/2 in the opening set of the final but only won one more game from there on, saying she felt flat! Goerges was superb though and she will hope she can play like this next season if she does you would expect even bigger success! It is all clicking right now, no two ways about it! I also had a double on Goerges and Isner pre-event(6/1 and 50/1), I nearly finished the season on a high too but it wasn’t meant to be! For Goerges she certainly has! Let’s see how she kicks-off 2018! 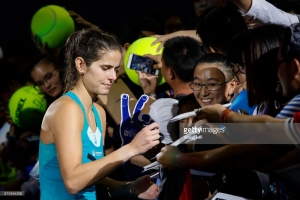