So, a follow-on to last weeks blog, Tunes and Tennis Players Part 1! Don’t expect Part 3 to arrive too quickly, that would be too predictable next week, I’m a firm believer in keeping you honest! Last week we witnessed a little sample of what goes on inside my imaginative brain with songs for Federer, Serena and Nick, can it get stranger?? I would have thought almost certainly! Here we go…

When Will I Be Famous – Bros (Sascha Zverev) 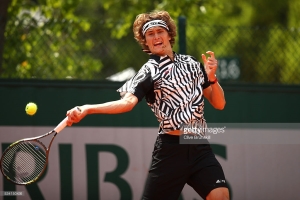 Now, of course, Alexander is already very well known and indeed famous on tour, but surely he will only ever be famous in his own eyes when he wins his first Grand Slam.  Big things are expected and rightly so, he is class! This 1987 Dance-Pop release from the Surrey-born brothers reached number two in the UK Charts the following year. Though as per usual I am taking the song slightly out of context it fits well enough to me! With the lyrics “When will I, will I be famous? I can’t answer, I can’t answer that”, “But you keep asking the question Oh, you’re not supposed to mention” (this I assume is related to the press continuously speculating??). There are also bits about “You’re the best by far” and a cheeky reference early on to fellow German, Karl Marx, it must be Sascha’s tune surely? The fact that there is a line about being a legend adds to the rumour!

This sounds a little harsh, especially after The Dane’s end of season form and world ranking of three but I mean it for the right reasons! The Dane had been written off in some quarters but has always been a fan favourite. She has gone about her business and turned her career around after reaping the rewards for working on her aggression. This tune from the Leicester based Indie band from back in 2009 is about “being an outsider but gaining a sense of empowerment from it”. There must have been times where Woz has used the feelings of being the underdog and written off to motivate and to “keep herself riding on this train” (The WTA Tour being the train?).  “See the local loves a fighter Loves a winner to fall”. Also references to learning from losses, so I don’t think this is a bad shout!

Now Nole has spoken publicly about his lack of support and respect at times and you can’t really argue that he is wrong, he deserves much better all joking aside! This was actually a late addition to the post, when I randomly heard the tune whilst prowling on Spotify and MY is this some tune! An era when trance music was at its best, this 2004 release that Seb Fontaine was involved with, talks of the ”need to feel loved” and “Free falling baby, Awake before I’m down”, is this about the drop in the rankings this year with injury?? Then, “Come catch a fire babe, Don’t let me fade away”, I assume must be about appreciating now before it is too late! Perfect fit!