It quite often gets mentioned how Roger Federer doesn’t sweat, try telling me that after today’s final! In truth at the start of the fifth, the judges were about the stop the bout such was the battering Federer was taking!

That was in stark contrast to the opening set when Federer came out firing and Cilic was all at sea with many factors, including his string tension! The Express train looked set to surge to a comfortable victory as he raced into a 4/0* lead, as he saw the remainder of the set out on serve, but the Croat has begun to settle. Interestingly, this was played under the roof today, which seemed unnecessary and Cilic had practiced outdoors, Federer indoors. This obviously had something to do with Cilic’s string tension I would imagine. Make what you will of that but the conspiracy theorists will have a field day!

In the second, both players saved break points with Cilic missing a backhand on set point with Federer serving at *4/5. We were heading to a tie-break. Fed got the mini-break midway through but that galvanised Cilic who ripped a backhand winner as an immediate response and then upped his level with some heavy hitting off both wings to take the set! It was much deserved as Cilic was looking to be the aggressor, even making forays into the net to vary the tactics! 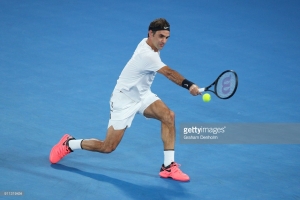 It looked all but over at the start of the fourth as from *30/0, Cilic chucked in some unforced errors as the Fed-Express hung in the points and got what looked a crucial break at the time. In the Croat’s next service game he saved a virtual match point with a booming forehand. Then when he got his opportunity in the sixth game he put Federer on the back foot, even forcing the Swiss master to double fault, 3/3 in the fourth. The match had turned all of a sudden and Cilic started dominating with serve and groundstrokes. Even the backhand, which had looked like it had cost him a chance midway through this match was yielding winners. He kept going after the Federer serve and broke again in the eighth game, getting his reward for relentlessly punishing groundstrokes. He completed a 5 game winning streak by serving the set out to love at *5/3! Marin was swinging freely and was rushing Fed, he had him chasing down shots and simply wasn’t giving him any time or chance to be aggressive!

The first game of the decider is where the match was won and lost. As Cilic’s constant barrage was getting the better of Federer, it looked for the world he would break but he missed break points, including a forehand that had been his bread and butter for the last 6 games. Federer was ruffled though as he started having a moan about the line calls in the next game. Sadly, Cilic started missing immediately and Federer didn’t have to do all that much to break. This was a chance that he wasn’t going to let slip again and with it, the Croat’s game started to unravel. Federer gained the double break and served it out to love for a  6/2 6/7 6/3 3/6 6/1 victory.

It is number twenty for Federer and his sixth Australian Open title. He will know that he got away with one today, as his game started to look lightweight against the huge hitting Croat. The respect that Federer had shown him coming in almost seemed to push Cilic on here, knowing he can cause him problems. It made for a compelling final! 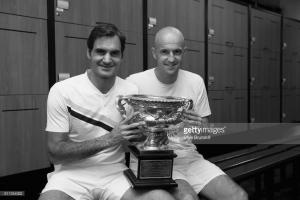