Petra Kvitova stormed through the draw in St.Petersburg to claim her first title since Edgbaston last year. It was one of those serving clinics that she has dished up before. She dropped sets against Irina-Camelia Begu and Julia Goerges, in a top quality semi-final but was untroubled asides from that. She schooled Elena Vesnina 6/2 6/0 and Jelena Ostapenko (second seed) 6/0 6/2, before dropping just three more games in the final against Kristina Mladenovic (defending champion) who also found her form last week. I think I counted 14 straight losses for Kiki, so it’s nice for her to get back on the mark! You can’t deny Petra when she plays this way, she’s very, very difficult to beat. I liked Daria Kasatkina’s chances and she actually took out a tired looking Wozniacki before losing to Mladenovic in the last 4! Also worth noting that Caroline Garcia is saying her back is getting better BUT, she is still struggling. She lost to 18-year-old Elena Rybakina!

Timea Babos won the event in Taiwan. I really like her in this kind of tournament, she can have her moments and go a bit awol but I think that she is very underrated as it stands! She dropped one set on her way to victory here, against Dalila Jakupovic in the second round. She beat Kateryna Kozlova  7/5 6/1 in the final. The Ukranian also had an excellent week, beating second seed Shuai Zhang, Ying-Ying Duan, Yulia Putintseva and Sabine Lisicki. Let’s see if the German can put a run of tournaments together now after reaching the semi’s here. Top-seeded Shuai Peng, third seed Sam Stosur and sixth seed Zarina Diyas were all early casualties.

There were wins for France, Italy, Spain, Germany, Kazakhstan, Croatia, USA and Belgium in the Davis Cup. By and large, the competition was missing a lot of the ‘top names’ but Sascha Zverev beat Kyrgios in the fourth rubber to give Germany victory in Australia. Borna Coric won the fourth rubber and the tie for Croatia against Canada by taking out Denis Shapovalov in straights. Cameron Norrie caused a big storm when coming back from two sets and a break against Bautista Agut in Spain, on red clay! Fair effort indeed Nozza! Then he gave Albert Ramos Vinolas a game on Sunday, eventually losing in four. These were his first matches on clay so big, big props to him. I don’t think that I’m the only one surprised by his level over the weekend and like i said on red clay. Effort! 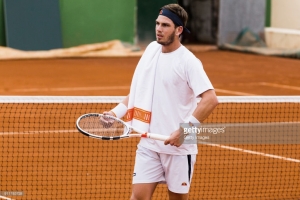