A strong field in the men’s Acapulco event was obviously weakened with the withdrawal of Rafa Nadal, to a hip injury. Juan Martin Del Potro took full advantage in a draw that still contained Sascha Zverev, Thiem, Sock, Anderson, Querrey and the out of form John Isner. Isner usually loves Indian Wells, so this could be interesting. Delpo though is looking to put all his injuries and problems behind him. Beating three top ten players from the quarters, Thiem, Zverev and then Anderson 6/4 6/4 in the final, will do him no harm at all. He looked good all round in Mexico and seems to really embrace this event. Anderson had beat Chung and the impressive Jared Donaldson on his way to the final, but now trails the Argentine 0-7 in their personal head-to-head battle.

Pablo Cuevas’ three-year winning streak in Sao Paulo came to an end, losing to eventual champion Fabio Fognini on the indoor clay in Brazil. Fognini was in superb form last week and clinched the title having taken out the Uruguayan in the semi’s, he then beat Nicolas Jarry from a set down in the final. I think the Italian has played very well since the US Open incident, he is now up to 19 in the world rankings. Jarry made the final after backing up his semi’s in Rio the previous week. The big serve and forehand busted Lajovic, Pella, Ramos-Vinolas (again) and Horacio Zeballos in the last four. Zeballos himself had been in impressive form last week.

Roberto Bautista Agut won in Dubai, beating Lucas Pouille in the final 6/3 6/4. It was a reasonably comfortable week for the Spaniard whose consistency shone through. Malek Jaziri made the semi’s having beaten an ill Grigor Dimitrov. The Bulgarian was still recovering from the virus he had in the final of Rotterdam. Jaziri played well all week though and says he has made a lot of changes to his game. Wins over Dimi, Haase and Tsitsipas here. Pouille did gain revenge for the Marseille loss to his pal, Karen Khachanov in the second round here. His semi against the increasingly impressive Filip Krajinovic though took too much out of him, it went to a final set breaker. 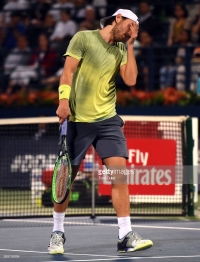 Lesia Tsurenko retained her title in Acapulco. She says she really likes the conditions and her results prove that in Mexico. She beat Kristina Mladenovic again, last year it was the finals, this year it was the quarters. Then Daria Gavrilova had little left in the tank after her quarter-final win over Veronica Cepede Royg in the last 4. Tsurenko beat Stefanie Voegele in three in the final. Voegele’s variation caused her opponents a headache last week. She took out top seed Sloane Stephens (who won her first matches since the US last year) and an inform Rebecca Peterson in the semis. The Swede was very aggressive by all accounts in her breakthrough week, having made it through qualies. The conditions, as they were for the men were tricky, to say the least, heat and humidity taking its toll on several players! 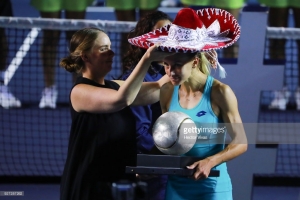 Sara Errani won the new 125K series event in Indian Wells. This event is part of the Oracle Challenger series and is played at the same venue as the BNP Paribas Open. The Italian got through two rounds of qualies, where she dropped her only set of the week (against Claire Liu) and then battered the field on her way to the title. She beat Kateryna Bondarenko in the final, 6/4 6/2. It would appear that Errani is playing herself back into a little form, she will look forward to the clay swing!

Serena is back in Indian Wells this week, she plays Zarina Diyas in her opener. #renasarmy.