When I go through the era’s I have witnessed in my life as a tennis fan, I tend to think of early memories first.

I admired Sampras, possibly when it was too late but thankfully the internet gives you the opportunity to appreciate and marvel at your fingertips. Likewise, Federer has been a fantastic player but neither has been my favourite.

I love Rafa, pretty much everything about him in fact. The attitude and will to win are absolutely on point and I can’t sing his praises enough when it comes down to his class and dignity as a professional.

Frances Tiafoe, Hyeon Chung and Andrey Rublev look possible candidates to break into this list in the future, these are all lads I have warmed too.

These are all players I like and they rotate from 8-10 in my list, but there are a select few that have made me get out of my seat fist pumping and giving it a bit more if you know what I mean!

(7) Dan Evans – This will not go down too well in a lot of circles. I don’t really care. Yes, he was a naughty boy but I can assure you people have done a lot worse in their careers. He will know he has done wrong. I love his all-court style and the fact he will back his volleying. The fact he’s got a bit of an edge to him and is also a straight talker probably does endear him to me. Highly entertaining player to watch though, whatever people may say.

(6) Gustavo Kuerten – I simply remember hearing of this guy at the French Open in 1997 and he just smashed it. It was at Roland Garros where I first saw that yellow/blue, Brazilian style, Diadora outfit. Swag! The big serve, easily recognisable backhand and grunt were big winners for me. The smile was often seen and Guga was another hugely, likeable character. His victory at Roland Garros in ’97 was made of fairytale stuff as were each of his other two triumphs in Paris. Former World Number one.

(5) Juan Martin Del Potro – Boom! I just love watching DelBoy play flat out on the forehand and absolutely let fly. It is a joy to watch and without a doubt, one of the biggest adrenaline rushes in the game. Delpo always comes across as a top, top guy as both a competitor and a human being, he loves a bit of crowd participation. Beating Federer in New York was lights out stuff. Injuries have probably cost him adding to that list thus far. Big fan of his dog too. 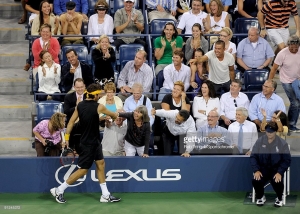 (4) Diego Schwartzman – I’m keeping up with the South American theme with this little magician, Diego had to make the list. I have been known to love a scrapper, who defies stereotype and in this day and age, nobody gets close to the Argentine in that department. The tenacity shown by Schwartzman at 5’7″ is incredible. and he continues to rise up the rankings. El Peque (the small one) as he is known, rips his shots and is a  pure joy to watch. Go on lad! 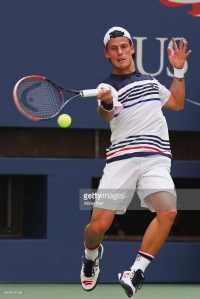 (3) Andy Murray – It has been one hell of a ride with Muzza and I have his back out of anyone in the men’s game these days. That day on the 7th July 2013 when he won his first Wimbledon is a day I will never forget. All three Slams have been superb but this was unique for obvious reasons. Emosh! Murray is awesome to watch when his hustle game is on and equally class when his offensive game is on. As a player, he has the full package and he talks a lot of sense. I’m a big fan of Murray all round, he isn’t frightened to straight talk if need be and good on him, he can also get a bit feisty! Brilliant! People should undoubtedly appreciate what Muzza has given us as a Brit. Legend!

(2) Michael Chang – My first tennis idol. If I was to describe Chang’s style he was probably the original version of Nadal, or before that Hewitt in the men’s game. The American was only 5’9″ but he had leg’s the size of tree chunks, he was an incredible athlete who had a never say die attitude. He would chase anything down and give up on nowt. Deserved more than one grand slam but was in an era that had Sampras, Agassi, Edberg, Courier etc. Chang was my hero out of any of them though. A great pro. 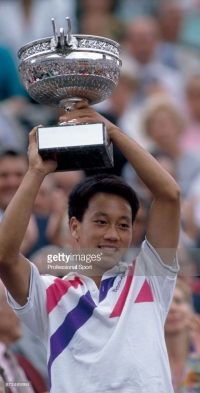 (1) Tim Henman – The main man (my blog The Kid that Grew Up Supporting Tim Henman! says it all). If you are more of a football fan then I would describe this scenario to you as Tim Henman FC. I was a fan, Britain’s second greatest player of my era unquestionably. A fantastic serve and volley player who also used to chip/charge, this set the scene for plenty of ‘squeaky bum’ moments. There was an impressive dossier of rollercoaster rides, which made for compelling viewing.  Was a spot on role model who put tennis back on the map in the UK. The Henman years were boss, what a hero! 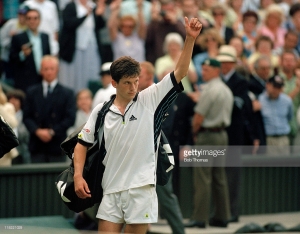