It is unbelievable to think that this is Del Potro’s first masters series 1000 title but it is. As he did when he won his sole slam in New York he defeated The FedEx in the final. Federer actually had three match points but it would have been harsh on Delpo had he lost. The backhand is certainly no longer a weakness and it proved to be a weapon (down the line) in California. After all his injuries and resulting surgeries, this is a big confidence boost for him. Made up for the lad!

It capped off a fantastic week for the Argentine, where he survived tough three-setters against Leonardo Mayer and then Philipp Kohlschreiber in the quarters. The latter match being of a very high standard. It was a good effort from Kohlschreiber over in the desert who played some good stuff, in particular when taking out second seed Marin Cilic. The Croat continues to have a poor record at this event. Milos Raonic made the semi’s, but I’m still not convinced he is anywhere near his best. Delpo exposed him in his 6/2 6/3 victory in the last four. The Canadian made good use of a nice looking draw but don’t expect miracles just yet.

Borna Coric also posted a decent effort by making the semis, taking Federer the distance in their semi. He did have a break in the second and third sets but tightened up on both occasions. An early victory over Bautista Agut and his first win against Kevin Anderson in the quarter’s, stood out last week. There is no doubting how talented the Croat is, especially over three sets, he now needs to up his level over five sets. Coric is still yet to progress beyond the third round of a slam.

There was more frustration for higher ranked seeds (numbers 3, 4 & 5) who have been struggling with their form this season. Dimitrov, Sascha Zverev and Dominic Thiem all failed to make it past the last 32. Thiem has pulled out of Miami after an ankle injury saw him retire against Cuevas in the third round.

Djokovic played his first event since the Australian Open and lost his opener to qualifier Taro Daniel. The Serb obviously looks rusty and said he felt nerves during his loss. Finally, Hyeon Chung made the quarters before running out of steam against Federer. The Korean may be worried about blister problems but the consistency of a top player is certainly there.

Delpo will go into Miami now looking to complete ‘The Sunshine Double’. 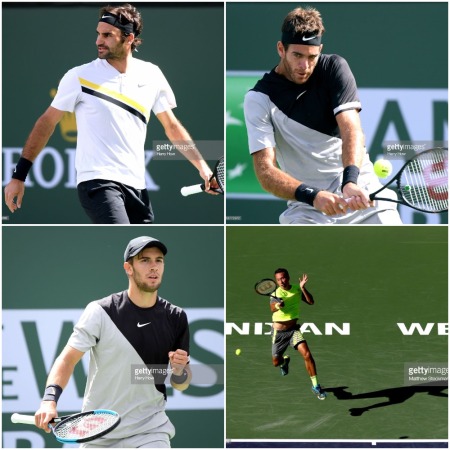 As my previous article read, Indian Wells witnessed The Return Of The Big Two on The WTA Tour!. Serena lost to Venus in the last 32 and Vika fell a round earlier to Sloane Stephens. Still positive times ahead though, it could just take a bit of match play to get there.

Naomi Osaka stepped her game up to take her first title. You could possibly describe Osaka as having a similar game to Serena and at 20 years of age, she has a hell of a lot going for her. She has been criticised in the past for having ‘no plan B’, lacking consistency and getting down on herself. Osaka says she has been working on these aspects and you can see the fruits of her labor. Straight set wins over Sharapova, Radwanska, Vickery, Karolina Pliskova, top seed Simona Halep (6/3 6/0) and Daria Kasatkina in the final back up the claims. The only set she dropped was against Maria Sakkari in the fourth round. Oh and btw, she won both of the other sets 6/1 6/1, so it is fair to say it was fairly emphatic. A popular Champion in California who will be liked by crowds across the World. She certainly seems to have some banter!

Kasatkina’s variation had impressed all week with comfortable victories over Stephens and Wozniacki before hammering Angie Kerber 6/0 6/2. A tough three-setter in the semi-final against Venus left her flat in the final though. Venus posted straight-sets wins over Cirstea, Serena, Sevastova and Suarez Navarro but a few too many errors against the Russian in the semi cost her a place in the final.

Having had a bye in the first round Garbine Muguruza lost to Sachia Vickery (who breaks into the top 100, now 89), obviously pleased to see Sachia getting some decent results, keep it going! Elina Svitolina only went one round better, losing to a back inform Carla Suarez Navarro. The Spaniard had been playing well but didn’t turn up in her quarter-final loss to Venus. This is a useful time to come into some form with the clay around the corner for CSN!