I sound like a broken record but it is now 46 consecutive sets for Nadal on clay. As per usual he just sweeps his way through the draw with minimal fuss. It really is something to not drop sets, it just shows the focus of the lad and of course his clay court supremacy. Carballes Baena, Garcia-Lopez, Klizan, Goffin and Stefanos Tsitsipas have become fully subscribed members in Barcelona. No 4/7 left for the heavy hitters at the French, you’ll have to make do with the 1/2 but its shortening by the second. The days of being 1/3 for Roland Garros look to be back. It is 11 titles in Barca now to go with the 11 in Monte Carlo.

It was another big step forward in the career of Tsitsipas by making the final. I like this lad more and more when I see him. He hadn’t dropped a set all week until running into Nadal, that’s pretty impressive when you think he beat Schwartzman, Ramos Vinolas, Dominic Thiem and Pablo Carreno Busta. His all-court game is great to watch.

Djokovic will be disappointed with his loss to Martin Klizan as awkward as the Slovak can be. I wasn’t expecting the upset here. Dimitrov lost in the quarters to Carreno Busta.

Having been runner-up in Dubai, Lucas Pouille is now on a three-match losing streak on the main tour (Davis Cup aside). The top seed put in another lacklustre effort against John Millman in Budapest last week. Millman did go on to make the final but had to finish off Aljaz Bedene on Sunday in the semis. Making hard work of that and getting a little tight cost him in the final later in the day. 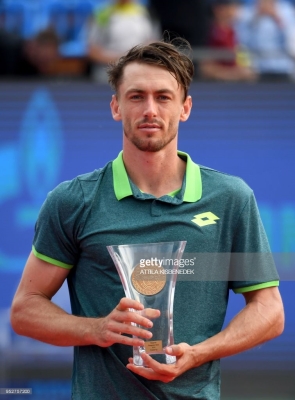 Marco Cecchinato got in as a lucky loser and then, as we have seen before, ended up going all the way, to win his maiden ATP title. Reports suggest that good serving was the key to his success. He beat second seed Damir Dzumhur, who looked to be carrying an injury and then Jan-Lennard Struff and Andreas Seppi. Interestingly, I read that Cecchinato was 0-23 on the main tour when dropping the opening set before this week, he came back from a set deficit twice in his victories over Struff and Seppi.

After a frantic weekend in the Fed Cup, you can usually expect to see a few upsets, whether it be due to injury, fatigue or partying in some players cases. The line-up in Stuttgart was strong, as usual with only Wozniacki and Venus missing from the Worlds top ten. Karolina Pliskova took the title on the fast clay in Germany having survived against Jelena Ostapenko in the semis. Her serve just about seeing her through here and she then defeated Coco Vandeweghe in the final.

Vandeweghe had taken out Sloane Stephens 6/1 6/0 in the opening round and top seed Simona Halep, who said she was still suffering from her right hip/thigh injury. Second seed Garbine Muguruza had to pull-out a set down to Anastasia Pavlyuchenkova with a lower back injury. Caroline Garcia looks to be finding a bit of consistency again after wins over Sharapova and Svitolina saw her make the last four (lost to Coco).

Petra Kvitova didn’t continue from where she left off. Having led the Czech Rep to victory over Germany in the Fed Cup on the same court, Angie Kerber reversed her loss in the first round at the event. Angie only lasted 8 games against Anett Kontaveit though as she retired with a right hip/thigh injury. Kontaveit herself had found some form for the first time since her last 16 showing at the OZ Open, losing to Pliskova in the semis.

Top seed Caroline Wozniacki pulled out of the quarter-finals at a set a  piece with Pauline Parmentier with an abdominal injury in Istanbul, leaving the draw wide open. Svetlana Kuznetsova was second seed here (28 in the world), so this was up for grabs after the Dane’s exit. Parmentier was the one to take advantage, beating Irina Begu and then Polona Hercog in the final.

Kuznetsova snapped a 5 match losing streak (largely due to injury this was her first win since the US Open) by making the quarters and as she says: “you can practice as much as you want, but nothing gets you better prepared like playing matches”. Let’s see if she can build on this again. Classy operator, no doubting that and a very well liked player all-around.