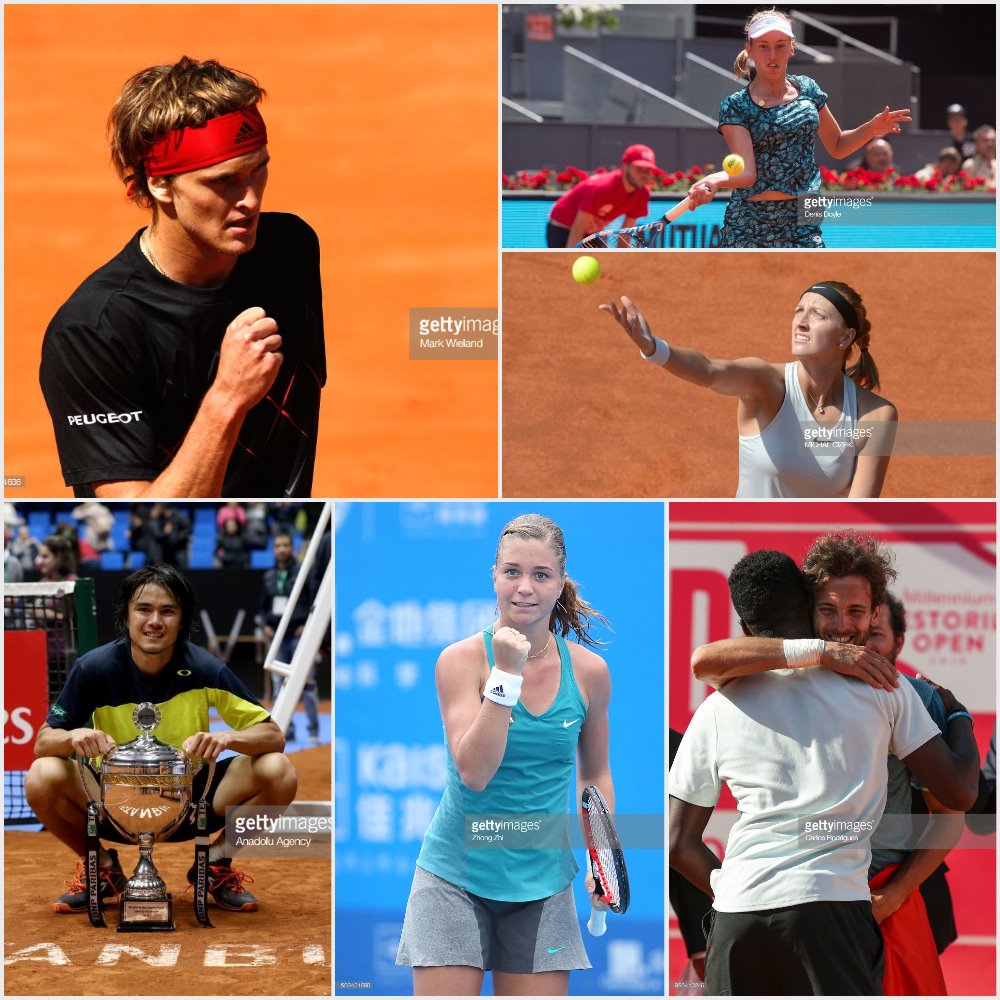 So, this was life without Nadal, for one week anyway. The players must have been buzzing. A chance to step up and take the limelight. Anyway, must crack on this week, a total of six main tour events to get through.

World number three, Alex Zverev was the top seed and defending champion on home soil in Munich. Yannick Hanfmann gave him a scare in his opener, pushing the top seed all the way in a very high-quality match. From here he racked up wins against Struff, Chung and Kohlschreiber in the final. Demonstrating his ability to up his level in the final against an opponent who had been in cruise control all week. Kohlschreiber had not dropped a set against Karlovic, Mischa Zverev, Bautista Agut and Maximillian Marterer.

Diego Schwartzman lost to Marterer in his opener, the Argentine has been struggling with his form after the transition from hard to clay. This should only be a minor glitch, he has suffered some pretty heavy defeats so far though on the red stuff. I expect to see an improvement sooner rather than later.

As I said in my last blog, Marin Cilic got married the weekend before Istanbul. Cilic was the top seed in Turkey, there was a fair gap in the rankings to second seed Damir Dzumhur (32). Cilic got taken out by Malek Jaziri in his opener and complained of a knee problem which will keep him out of Madrid this week. It must have been tough having been newly married though and you can understand the Croat being slightly off the pace.

Jaziri went on to make the final before losing to Taro Daniel, who claimed the first main tour title of his career. Daniel’s solid baseline game brought him back from the brink twice. Taro trailed Rogerio Dutra Silva 4/0 in the decider in the last 8 and then came from a breakdown, twice in the decider in the semis against Jeremy Chardy. He had also taken out a tired looking Aljaz Bedene 6/2 6/2 in the second round. Props to Taro.

Kevin Anderson and Pablo Carreno Busta were the top two seeds in Estoril but both fell before the final. Anderson lost to Stefanos Tsitsipas, who was backing up from last weeks appearance in the final of Barcelona. Carreno Busta lost in the semis to Frances Tiafoe.

Joao Sousa won on home soil having had a real battle to make the final. He saved match points against compatriot Pedro Sousa and then won up and down battles against Kyle Edmund and Tsitsipas in the semis. He dropped the middle set both times but fired himself up for the deciders. Tsistpas ran out of energy in the semis, losing the final set breaker. The final was more straightforward against Tiafoe, who didn’t quite play to the same level as he had throughout the week. The crowd certainly played a big part in Sousa’s success in Portugal.

Tiafoe has made the leap from U.S.A to Europe and will be pleased with making the final here. Both him and Tsitsipas are starting to make big strides along the lines of Rublev and Chung last year. Cameron Norrie notched a decent win over Robin Haase before losing out to Carballes Baena and then teamed up with Edmund to win the doubles event.

Karolina Pliskova was the top seed in Prague, where she was drawn against her sister in the opening round before withdrawing. This left the draw wide open for Petra Kvitova. Her power was on full show last week as she made the final without dropping a set, bullying each and every opponent on the way. In the final she beat Mihaela Buzarnescu from a set down. It is the first time she has landed the title in Prague and is now her third title of the season. The conditions may suit her on the quicker clay in Madrid, but time will tell if she can back up in a strong premier mandatory field in Spain. It is possible.

Buzarnescu really impressed me here with her performances last week though. The Romanian was brilliant in beating last years runner-up Kristyna Pliskova in the quarters, she looked unbelievably solid and showed plenty of class in her game. She then took out Giorgi in the semis, showing that the 30-year-old still has plenty to give. Petra was just one step too far in the final and a step up in class. Third seed Daria Kasatkina lost to Jasmine Paolini in the first round.

I have said it before but Elise Mertens has backed it up, again. As the top seed in Rabat she eased to the title, the only set she dropped was against Laura Siegemund. The Belgian has started to become a flat track bully in these events. Two of the main threats in Dom Cibulkova and Timea Babos fell in the opening round to Polona Hercog and Alexandra Dulgheru respectively. Hercog also lost next round to Paula Badosa Gilbert.

Mertens has racked up eleven straight wins now (before Madrid, where she lost to Halep after winning a round), having won a few weeks ago in Lugano. She was a cut above the field here, being very economical on the games conceded front with wins over Kucova, Errani, Hsieh and Tomljanovic. Siegemund pushed her but then retired in the decider when a breakdown. She remains very underrated, especially for her consistency at this level of event.

The 125k event in Anning, China, was won by Irina Khromacheva. The 22-year-old Russian walked away with both the singles and doubles title here. In the final, she beat Saisai Zheng who was looking to back up her 125k win in Zhengzhou a few weeks ago, where she beat Yafan Wang. The field included Shuai Peng (lost to Zheng), Yafan Wang and Yanina Wickmayer (lost to Khromacheva).