I was lucky enough to have fantastic seats on Centre Court for what was a good days order of play.

Rena really had to step it up today against Camila Giorgi. I did say in the Day 7 report that we didn’t want to take this match lightly and so it proved. Giorgi likes to boss and dictates the points herself too, so this was always going to be a toe to toe contest. Both players came out hitting big as you would expect, trying to get the first blow in. Serena chucked in one below par service game and it cost her the set. I was edgy before the start but I knew she was going to have to up her game a tad more here. It was clear she was going to have to win this and the Italian wasn’t going to roll over. She sounded confident going into it and fancied her chances did Giorgi. Serena knew this was a threat and from there on in did not face another break point. The Italian tried to slow Williams down once during the match by holding her hand up just before a delivery. Rena just stared down the Court but the look was one of ‘how dare you’, too right the rule is you play to the server’s pace. It put even more fire into Rena. She broke the Italian early in the second and third and played a very compact match from there on in. A backhand down the line clinching the all-decisive break and the scream of the joy…..and from Williams. I think I saw Serena served 10 aces in the decider, so that’s a fair indication of how she was serving by the end but the placement was decent all match. She looked powerful and solid off return and the good news is thing will only get better with time. It is absolutely incredible that she can slot straight back into this level and it is a testament to her once again. It is five down, two to go.

She plays Julia Goerges in the semi-final after the German came from a set down to beat a tiring Kiki Bertens. They played in Paris in the third round where Serena won a decent encounter in straights. Goerges got her game going today after losing the first, though Bertens actually said after she thought she was lucky to win the first set. It sounds like Goerges really got the forehand dominating in sets two and three. Bertens could potentially have been suffering from her exertions in the doubles. Julia had a 10/8 in the third against Strycova on Friday, she looks fine though.

Earlier in the day, Angie Kerber had beaten Daria Kasatkina 6/3 7/5. This was, as expected, a decent match aesthetically. I was telling my GF how this girl (Daria) is just a joy to watch, she has every shot in the book and can mix it up. She was the aggressor against Kerber, who was upto her usual solid baseline game, which we know she is exceptional at. Angie had to serve for this a couple of times in the second, Daria just wouldn’t go away. The problem was the Russian showed a little bit of inexperience when getting back on terms, handing the initiative straight back with a few errors. This was decent from Angie again though and she is in good form, no two ways about it. Kasatkina is going to win slams, I’m sure of that, just a few minor tweaks and learning curves ahead. Kerber goes in as a small favourite over Jelena Ostapenko in their semi-final. The Latvian won a close contest putting an end to Dom Cibulkova run at SW19. She was all over the Cibulkova second serve and that was the difference. This is a different player from that one that I saw play Katy Dunne on Centre in the first round last week. She has relaxed from there on. 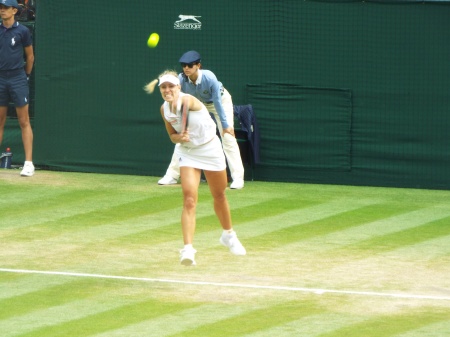 For the record, I might not have done too well in the men’s this year but I have given you 2/1 Serena, 9/2 Kerber and 18/1 Julia Goerges for their quarters as winners in the Ladies.

Delpo finished of Gilles Simon in a fourth set breaker, he had already served for it earlier in the fourth. As I said, I think this matchup isn’t necessarily to DelBoy’s liking and its a grind of a victory for him. It isn’t what he wanted going into his match with Rafa (just under four and a half hours) but he has been very comfortable in the lead up to this. Should be a cracker of a match, I always look forward to this contest.