I flew over to NYC last night and had the added bonus of Finnair/American Airlines showing the tennis live onboard the flight. Class. Was it ‘Live’? It was probably ahead of Amazon Primes streaming! Anyways this will be a quick blog today as I need to get down to Flushing Meadows.

I actually only saw the incident with Kyrgios when I arrived at my hotel last night on ESPN. What on earth was Lahyani doing getting down from his chair to tell Nick “I want to help you,” and “I’ve seen your matches; you’re great for the sport.”? He was trailing Pierre-Hugues Herbert by a set and a break at the time before turning it round in four. I wouldn’t be impressed if I was Herbert that’s for sure. Neither was Roger Federer, who is Nick’s next opponent now. He didn’t think Lahyani should be getting involved and that he obviously said “too much” to say to Kyrgios. Federer disposed of a very bad-tempered Benoit Paire in three, the Frenchman smashing his racket and going for it yesterday, as if he were the favourite for the match, gotta appreciate that kind of attitude. 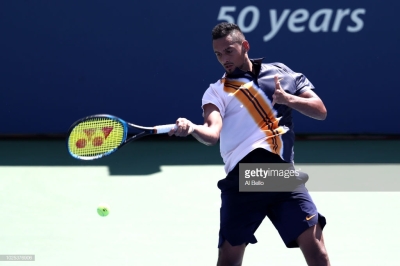 Novak Djokovic took out Tennys Sandgren but in four sets. This was looking plain sailing for the Serb but he lost his focus in the third a little and Sandgren got a bit inspired but he knuckled down again in the fourth to progress. I thought he played pretty well today by and large though. The blonde haired Richard Gasquet next. 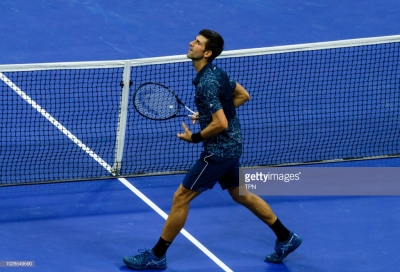 Elsewhere Hyeon Chung, Fabio Fognini and Pablo Carreno Busta all went out. Chung had problems with blisters again in his straight sets loss to Mikhail Kukushkin, Fognini was all over the gaff in his four-set loss to John Millman (who seems to like NYC) and PCB retired when two sets to one-up against Joao Sousa. There were more comfortable wins for Main Cilic, who won the last 14 games against Hubert Hurkacz and Sascha Zverev who beat Nicolas Mahut in an easy three. Cilic will now play Alex De Minaur who looked pretty decent in taking out Frances Tiafoe in four sets. The American couldn’t quite get it going and the Aussie was too consistent. Diego Schwartzman and David Goffin both took four sets wins, though both lost sets from 5/2 up against Munar and Haase respectively. Finally, Lucas Pouille battled back from the brink of being two sets down against Marcos Baghdatis to win in four.

Caro Wozniacki came into the event with all kinds of niggles and Lesia Tsurenko took advantage. The Ukranian was having problems with her elbow in the first set but after that she overpowered Wozniacki and ran away with the second to take it 6/4 6/2. It is a defeat you always felt was going to happen for the Dane sooner or later with her preparation coming in as second seed. Tsurenko has proved herself, that when she is injury free she is capable of mixing it with some of the best. Daria Kasatkina also lost out to Aliaksandra Sasnovich, I mentioned in my review that Kasatkina seems to have not been at the party since Wimbledon and so it continues. Sasnovich has been playing very well of late and will have a crack at Noami Osaka next after she breezed past Julia Glushko for the loss of two games.

Elsewhere the seeds had varying degrees of difficulty but found a way through. Angie Kerber dropped a set against Johanna Larsson and Caroline Garcia dropped a set but gained revenge for her defeat to Monica Puig last week, Suarez Navarro next up. Maria Sharapova won in straights but wasn’t great against Sorana Cirstea, she will play Jelena Ostapenko next who ground out a three-set win over Taylor Townsend. Madison Keys improved as the match went out against Bernarda Pera with a 6/4 6/1 win. This could have been potentially tricky for Madison. Kiki Bertens beat Francesca Di Lorenzo 6/2 6/1 and is one of the main beneficiaries of Woz getting beat. It makes her path to the last eight ‘easier’ as a result.

Finally, we have that big hitting affair we were looking for in the last round as Petra Kvitova will take on Aryna Sabalenka, who is now on a seven-match winning streak. This really will be a toe-to-toe contest next as both players will be going for it, looking to get the first strike in the rally. For the sake of putting Kvitova up with Bertens in the bottom half of the draw in my preview, I would like to see this match being scheduled for later in the day. The cooler conditions might help Petra a bit. She got the job done in the heat against Yafan Wang but it wasn’t great in the opening set apparently. Sabalenka took out the experienced Vera Zvonareva 6/3 7/6, playing yet more clutch tennis. I keep saying Sabalenka must run out of steam soon after a tough scheduling the last month but she is riding the wave of confidence right now.

I’m going to get ready for a great day of tennis live from the Arthur Ashe Stadium.