I rolled into Flushing Meadows last night expecting a nice relaxed evening on the Louis Armstrong, one where I would get back to the hotel at a nice and early time. I was wrong. There is always a match that exceeds your expectations and that was Cilic v De Minaur. I ended up leaving the Billie Jean King Tennis Center at 2.30 am and I wasn’t the only one. I would highly recommend the Grey Goose and Chambord-filled Honey Deuce served at the Open (see end of post) to make the experience even more pleasurable.

One of my tips for the quarter (at a whopping price of 66/1) gave me a right run for my money. 19-year-old Alex De Minaur took a two sets to love lead over Marin Cilic. My, he really is as fast as a greyhound around the court. The classic counter punching with his cross-court forehand looked as if it had taken Cilic by surprise. The Croat making a lot of unforced errors or was being left rooted to the spot. Cilic then upped the ante to win the next two and take it the distance, finding the right level of aggression to overpower his young, feisty opponent. When De Minaur took an early break lead in the decider it looked like the upset was back on, but he relinquished his serve immediately and before he knew it he was 5/2 down and match points down. As if the drama hadn’t been enough he saved 7 match points, refusing to buckle. The crowd, who were largely behind him responded once again and I was treated to the full US Open, late-night match experience on the new Louis Armstrong. By this time the stadium was nowhere near full but the atmosphere was absolutely electric. The Aussie dragged it back to 5/5 before Cilic found the right level of aggression again, finally breaking the youngster’s heart and his serve for a 7/5 fifth set victory. I cannot complain with the efforts from this young lad, he really left it all out there and I look forward to seeing a lot more of him in the future. He showed a lot of heart. Cilic will now face David Goffin in the fourth round after he just about got the job done against Jan-Lennard Struff in straights. Having been in cruise control for two and a half sets the Belgian almost blew a 4/0 lead in the third. Struff actually served for the third.

On arrival at the grounds, I felt I owed it to my pal Diego Schwartzman (El Peque) to go and give him a bit of support against Kei Nishikori. Especially after I took a particular interest in him last year here. He was two sets down when I got there and then played an inspired game to break and take the third set almost instantly. Showing his never say die attitude. Sadly the fourth set slipped away from him, 6/1 but it was a lot tighter than the score suggested. Nishikori having the slightly better delivery probably won the day here. He goes onto play Phillip Kohlschreiber who caused an upset by taking out compatriot Sascha Zverev. It was another false dawn for the youngster but I’m not that surprised. Kohlschreiber using all over his experience and variation here, giving Zverev a different look, mixing up the points.

In other results, Novak Djokovic once again disposed of Richard Gasquet in the last night session on the Ashe with minimal fuss. The Frenchman had nothing to really hurt Nole again. Djokovic will play Joao Sousa after he ousted Lucas Pouille, surprisingly in four sets. It sounds like Pouille had his chances but couldn’t take them when they arrived. Lastly, Roger Federer will take on John Millman in the last 16. The Fed-Express was having none of it against Nick Kyrgios. You always felt Federer would be pumped for this one, especially after ‘the Lahyani’ incident a couple of days ago. Kyrgios has not been playing at the level required here of late, so few surprises. Millman claimed a hard-fought four-set win over Mikhail Kukushkin. It will be both Sousa and Millman’s first appearance in the fourth round of a slam.

After watching Schwartzman I had high hopes on another of my bets Petra Kvitova, though I was exceptionally worried about the way Aryna Sabalenka just keeps on winning. So it proved. She was far too consistent and overpowered Kvitova. The Czech making far too many unforced errors and double faults. She totally lost her way in the second set having recovered from a break down twice in the first set only to relinquish her serve straight back. Experience counted for little here and I’ll be honest, as well as Sabalenka played I was very disappointed with Petra’s performance. Sabalenka once again raised her game and Kvitova simply could not go with it as the 7/5 6/1 scoreline suggests. Naomi Osaka is next after she double bageled Sasnovich. Yet another huge hitting contest awaits us there. Osaka talked down her chances coming into the event. Was it just to take pressure off? We will see where she is at next. 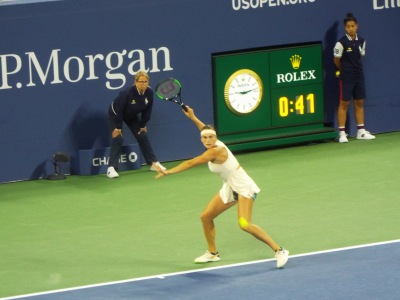 In other results in the women’s, Carla Suarez Navarro beat Caroline Garcia, for the first time in three meetings. By all accounts she served particularly well in the last two sets of her three-set win. Maria Sharapova is her next opponent after Jelena Ostapenko failed to turn up in the late night session on the Ashe. It sounds a bit like the Kvitova performance if you are asking me. Madison Keys admitted to being nervous in her match against Aleksandra Krunic, who she lost to at the Open a few years ago. Having dropped the first set she started to make Krunic move around more and as she said ”get her away from the baseline”. Her next opponent is Dom Cibulkova who came from a set down to oust Angie Kerber. Will I regret not tipping Cibulkova up? We will find out to tomorrow. This was an ultra-aggressive performance against Kerber, who couldn’t go with her by the end.

Finally to complete a bad day on the ‘tipping’ front Kiki Bertens lost out to Marketa Vondrousova. It doesn’t rain but it pours as they say. This was hugely disappointing for me as I feel Bertens reverted back to showing mental weaknesses, harsh possibly but that is how it looked to me. She served for the first set and was a break up in the decider having run away with the second. She just looked too tentative from where I was watching. Vondrousova is a hugely talented lefty but I expected Bertens to come through this with few problems. I was wrong. The young Czech girl will square-off against Lesia Tsurenko, who backed up her win over Wozniacki. The Ukranian reeled off the last eleven games to beat an ever-increasingly erratic Katerina Siniakova 6/4 6/0.

I’m off to get ready now as another day on the Ashe lies ahead. Nerves are starting to kick in. Rena’s Army.