Walking about in the Rena’s Army t-shirt gets it’s fair share of attention, especially at the Open. I’m not quite sure the locals understand what I meant after Serena v Kanepi when I said “I needed to change into my spare pants”. Several were told.

Having come out firing on all cylinders in the first set, in what was an awesome display of serving and power returning from Rena it looked like this might have been super quick. A couple of loose points in the first game of the second changed the complexity of the match though. Fair play to Kaia she really went for it thereafter and it made Serena go up another gear. So much so that the poor geezer I was sat next to could see me squeaking in my seat. It was time to get vocal and get behind my gal. Standing up in section 318 and clapping and shouting was required. I certainly hadn’t flown all this way to see here lose in the last 16. You could see the Estonian was a genuine threat and she was playing very well in the second set, blitzing some winners of her own. Without meaning to sound arrogant though it is one thing beating the World Number One and a different dynamic beating Serena Willams. Rena’s level went up another notch at the end of the second set and she carried this into the decider with her, breaking the Kanepi serve immediaetly and holding to reassert her dominance and take a stranglehold on the match once again. 18 Aces and 47 winners from the racket of Serena show this was a heavyweight contest. 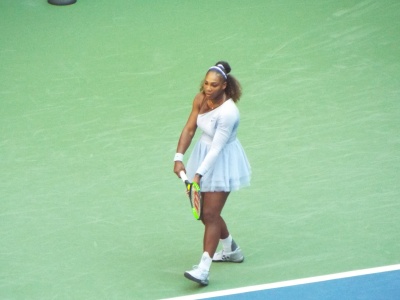 She will now have a crack at gaining revenge for her 2016 loss to Karolina Pliskova in this years quarter-final, a day when she was carrying a slight injury. This is the last time they played. Pliskova took out Ash Barty yesterday 6/4 6/4 and has snuck through so far, unfancied by many but it is time to take her seriously if she is through to the last 8 and Serena will know that. One match at a time for Rena, four down, three to go.

BTW – I was caught stunting on camera here on the Ashe… 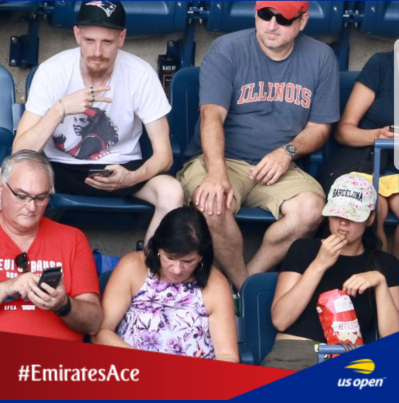 Sloane Stephens probably unsurprisingly took out one of my fancies for the second quarter in Elise Mertens. I always say how Mertens beats who she should beat and she wasn’t expected to win this against the defending Champion. I thought Mertens might take advantage if Sloane slipped up earlier in the event. Stephens was once again really solid here, stepping it up at 3/3 in both sets to claim a 6/3 6/3 win. Impressive from Sloane as she continues to improve as the event reaches the business end. She now takes on Anastasija Sevastova in a repeat of last years quarter-final. The American nicked that in a final set breaker then, she also comfortably beat her in Canada a few ago. Sevastova beat Elina Svitolina yesterday, the Ukranian once again coming up short in a slam and she says herself she needs to go back to the drawing board and get ‘stronger’. Sevastova’s variety of shot winning the day here in a 6/3 1/6 6/0 scoreline.

The first match of the day for me on the Arthur Ashe Stadium was Rafa v Nikoloz Basilashvili. I have to admit I missed the first two sets of this one due to two reasons. (1) I didn’t get back to my hotel room at the Nirvana until 4.30am on Sunday morning (Nevermind for all you Nirvana fans out there) and (2) I still had to write my blog. I had confidence that Rafa would get the job done as it looks a good matchup on paper for him. He coasted through the first two sets 6/3 6/3 but as soon as I entered the Court the Georgian started blasting winners from nowhere. 23 in total in the third set which he eventually took on the tie-break. In the fourth Rafa let slip a break lead only to break straight back and serve the match out in four (6/3 6/3 6/7 6/4). 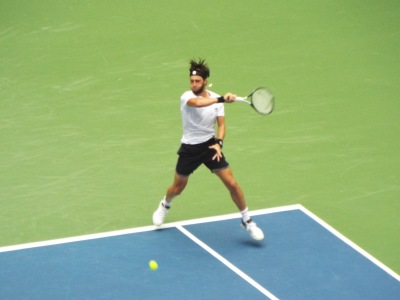 I’m not going to lie Rafa is making me have kittens with the trouble he is being caused here against these big hitters. Basilashvili has seen a marked improvement in his results since hiring coach Jan De Witt and you could see he still believed even at two sets down. Rafa will face another big hitter in Dominic Thiem next and like I say I am worried. Thiem says he played one of his best matches ever in dismantling last years runner-up Kevin Anderson 7/5 6/2 7/6. By all account, the Austrian made use of the ‘bigger court’ to adopt a Rafa style of play on the return of serve by being miles behind the baseline. He also served particularly well and Rafa will be fully aware of the threat here in the next round. 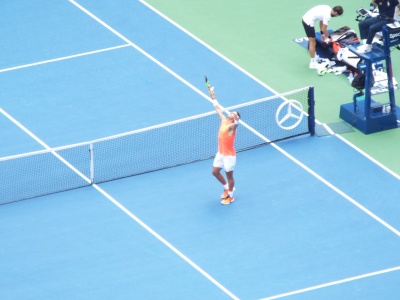 Finally, the last match of this half will see John Isner play Juan Martin Del Potro in another explosive encounter. Isner surprisingly didn’t have one tiebreak in his five-set win over Milos Raonic. The Canadian suffering from a hip injury at the end of the fourth but Isner deserves this and continues to have a good year. He has really kicked on after his win in Miami. Delpo also beat an injured Borna Coric 6/4 6/3 6/1 and continues to impress. Yet again I will repeat getting this done in straights (he still hasn’t dropped one set yet) will do him the power of good at the business end here. The Argentine has at times struggled in the latter stages as he had some brutal encounters in the build up. That cannot be said this time and there won’t be too many long points in his last 8 match with the American.