It was survival of the fittest in Singapore for the WTA Finals. Top seed Simona Halep pulled out with a back injury. Naomi Osaka was bothered by a left hamstring injury, Angie Kerber was also having problems with her back and Caroline Wozniacki was carrying a left knee injury. Wozniacki also said after her loss in the groups that she had been diagnosed with rheumatoid arthritis before the US Open, as she continues to treat it and cope with it. Poor Caro.
Elina Svitolina, who has said she will be addressing health issues in the off-season, took the title with a solid performance. In the final, she stepped it up against Sloane Stephens from a set down. The American once again proving that she is one for the big occasion, playing decent final sets against Osaka and Kiki Bertens in the group stages. She completed the clean sweep in the groups with a straight sets win over Angie Kerber. In the semis, she showed more determination coming from 0/6 0/2 to defeat Karolina Pliskova 6/1 in the third. Svitolina had also won her group undefeated with three-set wins over Pliskova and Wozniacki after initially beating an out of sorts Petra Kvitova. In the last four she knocked out Kiki Bertens in another tight three-setter but when it mattered, as she had all week she dug deep and believed in her defensive skills. A gutsy effort from the Ukranian. It moves her back up to number five in the rankings. 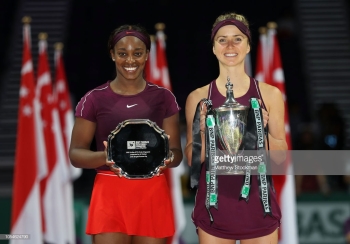 Roger Federer lifted his ninth Basel title in his hometown but he was made to work for this one. The Fed-Express had come out at the start of the week and said he has been hindered by a hand injury, sustained at the start of the grass court campaign. Federer said at times, there had been pain off the forehand wing during this period but now he was playing virtually pain-free again.

Both Filip Krajinovic and Gilles Simon had taken him to three sets, with Federer’s game not being at it’s most fluent. The second serve came up for some criticism throughout the week as it looked attackable. His first performance of any real note came when he blasted (a tired looking) Daniil Medvedev in the semis 6/1 6/4. His ninth crown in Switzerland was confirmed after he beat Marius Copil on Sunday. Copil caused him problems and led by a break in each set, but Federer turned it around 7/6 6/4. The Romanian is our mandatory qualifier to go well this week. Having beaten Lajovic and Mischa Zverev in qualies his serve and backhand were on fire. Wins over Cilic in the second round and Sascha Zverev in the last four show the level he produced in Basel. Zverev was the first top-five scalp of his career.

Vienna boasted eight of the worlds top sixteen in their entry list. This tournament had some serious bearings on the Race to London. Kevin Anderson has confirmed his place at the O2 by winning in Austria as the second seed. He saved a match point against Nikoloz Basilashvili in his opener and then got a walkover against Jurgen Melzer. The Austrian was playing his last ever singles event but had to withdraw due to gastric flu. Melzer had initially taken out Milos Raonic in the first round, in what proved to be his last match. Big Kev then got past Borna Coric (who withdrew a set down) and Fernando Verdasco in three sets in the last four. In the final, he took out Kei Nishikori to win his biggest title to date. That is now nine straight defeats in finals for Kei. He has won one set in total during these. Nishikori had been pretty impressive in the build-up to the showpiece. Having had a mid-match blip against Frances Tiafoe in his opener he made the final without dropping another set, including a 6/3 6/1 hammering of top seed Dominic Thiem in his home event. He now holds ninth place behind Cilic (7th) and Thiem (8th) in the Race to London but has overtaken John Isner with this showing. The American going down in the second round to Fernando Verdasco. The big question is will Juan Martin Del Potro play in London. It looked a formality of a withdrawal but by all account, he is determined to play there. Nishikori’s hopes could depend on this.