There were no official ranking points up for grabs in the NextGen ATP Finals in Milan. That doesn’t mean that the players aren’t up for it though, in fact, quite the opposite. There is a lot of pride at stake here and a psychological advantage can be gained on your younger counterparts. Hyeon Chung won the event last year, beating Andrey Rublev in last years final. Chung has proved he is a top player, albeit one who has suffered terribly from blisters throughout this season. The Korean went on to make the semis at the Australian Open this year, beating Sascha Zverev and Novak Djokovic after winning in Italy a year ago. This firmly announced himself on the scene. This years winner, Stefanos Tsitsipas will be a marked man next season, no two ways about it. He once again proved what a complete player he is when he won the title in Milan this year. 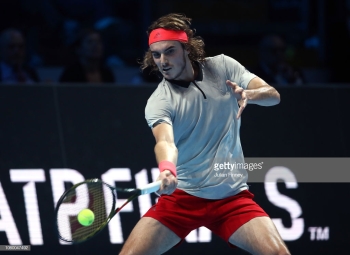 The forehand is a known weapon but the backhand flashes winners and his touch at times is sublime. Tsitsipas, who has been at the Mouratoglou Tennis Academy since 2014 has an attitude and an aura of a player who is going big places. He is very mature for a 20-year-old. He won Milan undefeated. A loss is possible due to the round-robin structure, it is a straight shoot-out from the semi-finals (the rules were in line with last year, first to four games, tie-break at 3/3 and no advantages etc). Victories over Jaume Munar, Frances Tiafoe and Hubert Hurkacz in the group set him up for a semi-final showdown with last years runner-up, Andrey Rublev. Rublev came into the event saying how his body felt good again and he was up for it. He was telling the truth and got better with each match. He came through in second place in his group having beaten Taylor Fritz and wildcard Liam Caruana (world number 619). It was my each-way bet at 9/2 in Alex De Minaur, that topped the rival group though with three wins. The Aussie once again showing his full array of speed and movement around the court and his rasping passing shots for a bit of good measure. He would face Jaume Munar in the last four, Munar getting through with a 1-2 record in the ‘Tsitsipas’ group. Advancing on sets won/lost ratio. The Spaniard being compared to a mini Nadal due to his attitude and love of a good scrap! He was the surprise of the tournament for me.

Tstitsipas was the player once again though that showed the ability to play big tennis at the big moments. He edged past Andrey Rublev in a five-setter of high quality in a battle of the forehands in the semis. Being able to up your games in tie-breakers is the sign of a big game player, one who has bottle. He did that against Rublev and then, again, against Alex De Minaur in the final, beating the Australian in four sets to lift the trophy. Rublev beat Munar in the third-place playoff in a deciding set. The Spaniard had also taken De Minaur all the way in the semis, refusing to go away but ultimately came up short on both occasions. De Minaur for his part also impressed in Italy. He has a lot of talent and what he doesn’t have in size he makes up for in fight and tenacity.

There were early defeats in the WTA 125k event in Limoges for the top two seeds, Mihaela Buzarnescu and Alize Cornet. Bacsinszky took out Cornet and Buzarnescu, who still doesn’t look fit, lost out to Mandy Minella, both going in the first round. Eighth seed Ekaterina Alexandrova won the title for the second time in her career, her first being in 2016. Wins over Olga Govortsova, Renata Voracova, Pauline Parmentier, Vera Zvonareva and then Evgeniya Rodina in the final. Rodina wasn’t fit by the sounds of things, calling for the trainer three times. The Russian is a useful operator on these indoor courts having said that.