Anyone who knows me will know of my fanatical support of Serena Williams. The (real) support kicked in around 2008 (after the Henman era). I had given everything to the Henmania cause. A personal highlight included having rows around the bar and clubs of Hereford, sticking up for the main man. He wasn’t a ‘bottler’…anyway. I needed a new hero and she wasn’t hard in finding. As she has with many other fans, the legend has grown and grown, year on year.

When people in the UK ask ‘who do you support?’ They usually mean which English Premiership/Football League team. I support Hereford (the small club where I was born), Liverpool (the team I grew up idolising and where I discovered my first hero in John Barnes) and Serena Williams. I don’t usually take defeats too well, I have a little sulk and think what might have been, then I analyse the match briefly and then I get on with life. Wins = Happiness. It really is as simple as that. That is the level Serena is at in terms of my support. The difference between tennis and football is that by and large, tennis is an individual sport. The winner takes all the glory for themselves and the loser has to wallow in self-pity. There is no team effort in singles. With Serena and Tim, I have lived and breathed a lot of points.

If you ever read my blog dedicated to Rena in my early writing days, you could easily have thought I’d lost the plot. If you know me, you would understand it and my sense of humour. Though there was obviously a lot of truth in what I wrote.

I am a big fan of her ability as a tennis player, a big fan of her passion, her focus, hunger, desire, drive, ambition, motivation and the way she sticks up for what she believes in. The latter could be anything, from on-court dress code right through to racism or sexism. As someone who is in an interracial relationship myself, I see first hand some peoples look and even their comments. She rises above all of this. Basically, She is an exceptional human being. A role model. I also just happen to think that she is Very, Very good looking, that’s all 5 foot 9 of her. That aside though, I have so much respect and admiration for the player I obviously see as the ultimate G.O.A.T. Heroes/idols like this make you believe in chasing your dreams. She is inspirational.

When she plays I am super pumped. Whether it be courtside (many occasions at Wimbledon, US Open and even an appearance at Roland Garros) or on TV! I’m shouting out and ‘giving it’ on the regular for any of her matches. When she is on fire, I know this is biased, but there is no better sight in tennis. Come on/let’s go!!! 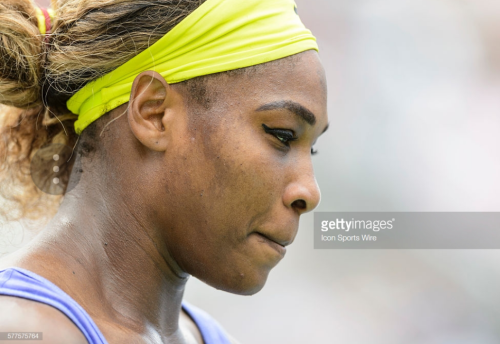 Previous to Wimbledon this year, I had met most of my heroes. Tim Henman, Robbie Fowler and John Barnes had all been ticked off the list. All three were after their playing days but it didn’t really matter. They were players I had always been fanatical about and had the utmost respect for. I had obviously not met Rena and if I am honest I didn’t think I would ever be lucky enough. Potentially after her playing days, I suppose, I thought it might happen then, as it did with the above three. What would I say? That went through my head, just don’t say anything stupid was my reaction! I am known for being a bit alternative, so you never quite know.

Usually, when I watch Serena I’m shouting my head off, high up in the clouds, whether it be on Centre Court, The Arthur Ashe or on the Chatrier. When I’m lucky I get ‘good seats’ but not ones that mean I could have any interaction. I’m the one that is standing up at the back, clapping and encouraging, believing I’m making a huge difference. I am almost always donning my Renas Army t-shirt, complete with my Serena mobile phone cover. Sometimes you just gotta flaunt it.

At Wimbledon this year I managed to get Court One tickets, about three rows back, right in the corner where the players enter and exit the arena. This was for her first round match against Araxnta Rus. This meant there was possibly going to be a photo opportunity. In fairness, it wasn’t just my girlfriend and I giving Rena vocal support in that section of the Court. There was another (noticeably) big fan, who like myself was pretty pumped. We had already been drinking, nothing major, but cider, prosecco and Pimms had been consumed by the end of the match. It must be the Hereford boy in me.

Williams completed a 7/5 6/3 victory, it wasn’t vintage Rena but it was professional. It was more than good enough.

I have already mentioned my girlfriend but she was instrumental in what happened next. Without her, this would not have been possible. Basically, the plan was for me to shift my wheels down the front after the match, while she picked up any official photo opportunity from row three.

I don’t know why, but I didn’t fancy my chances. I just thought something would stop me or as I would say, ‘gubb’ me. The other fan had the chance though and I thought there is no way this is passing me by! As they say in tennis, you might only get one chance at the return, so I knew I had to try and make this count. “Rena, Rena, can I please have a picture”. My Renas Army t-shirt must have been ringing out as loud as my voice.

She was awesome, she responded, ” yes of course”. I pointed to Erica and said “my girlfriend is taking the photo” to which she told me that she “loved my apparel”. This was a reference not only to my t-shirt but of course my phone case which was now pointing in her direction. I was absolutely buzzing by this stage. I think I still had to confirm to her that was, in fact, my phone case, which she unsurprisingly seemed to know. There was a quick bit of banter from both myself and Erica with the G.O.A.T after this but I honestly cannot remember what was said. Erica was shouting out how “lovely” she was as she exited Court One. By this stage, I was totally gone.

Did that really just happen?? I had to post it on Instagram to believe it was true. The moment I had been craving for had finally arrived. I think even a few of my pals fell off their perch when they saw the picture. Total dreamland.

A big thank you to Rena for taking the time out to have the photo. You honestly have no idea how much it meant. Believe me, others certainly do. Absolutely buzzing!

Signing out as a very proud fan.

One thought on “The day I met the biggest hero of them all and why it means so much!”