I think everyone thought that Evo played really well against Federer today. The fact the Federer-Express said after that “It feels like playing a mirror” and that “I have high regard in Dan” must be a decent consolation for Evans. Mats Wilander was all over his performance too. The 7/6 7/6 6/3 loss showed that he is back on the big stage for me, he didn’t freeze and he caused Federer problems. Evo would love those two volleys back from *5/4 in the first set breaker again. They weren’t easy but he has it in the locker to pull at least one of those out. At the end of the day there are no guarantees that had he made one, that he would have still won the set. The bottom line is that it is a good effort from Dan and there is a lot of good to take from his performances and professionalism. If someone would lay me a decent price I would have a bet on him to win an ATP Tour title this season. I mean that too.

As I mention betting, it is time to say that Kevin Anderson loss to Frances Tiafoe was disappointing. It looks like Anderson had problems with his elbow as he lost from a set and a break-up. There were medical timeouts and massages at the change of ends. We know that Tiafoe has potential and once in the points against Anderson he tended to (unsurprisingly) come out on top. The American has Andreas Seppi with the chance of making his first fourth round at a major.

Rafa Nadal comfortably beat Matty Ebden and no faces Alex De Minaur. De Minaur continued on a seven-match winning streak after winning in five sets against Henri Laaksonen. The Aussie was two sets up and seemingly breezing through to a match with Rafa but Laaksonen pegged him back and was only just pipped at the finish line. The amount of time on the court doesn’t look great preparation going in against Rafa. He won seven games at Wimbledon last year, though he is a much better player now. 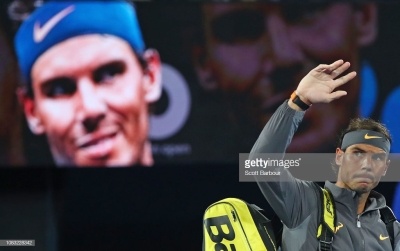 Marin Cilic has said that he is suffering from a knee injury after beating Mackenzie McDonald in four sets. Fernando Verdasco might fancy testing that out on Friday. Karen Khachanov was a straights sets winner over Yoshihito Nishioka and will play Roberto Bautista Agut next. The Spaniard following the pattern of his match with Murray, win the first two, drop the next two and clinch the decider, this time against John Millman. No mean feat that beating both of them in tight five setters. When will it take its toll?

Tomas Berdych was once again decent in his hammering of Robin Haase, who admitted as much after. I think he is enjoying going totally under the radar, Berdych. Diego ‘El Peque’ Schwartzman waits in the third round. Wouldn’t mind catching a bit of that. ‘El Peque’ won the fifth set against Denis Kudla, having initially led by two sets. It sounds like Kudla deserves credit though. Also in the winner’s enclosure were Stefanos Tsitsipas, Nikoloz Basilashvili (just about), Taylor Fritz (plays Fed next), Grigor Dimitrov and the Italian, Thomas Fabbiano.

Caro Wozniacki progressed to the third round and she is still yet to drop her serve. It was Johanna Larsson who came up short against the Dane today. The defending champ has bedded into the event nicely and continues her love affair with Melbourne Park. She will play Maria Sharapova next.

Katie Boulter played well against Aryna Sabalenka but went down 6/3 6/4. Both players stuck to their guns and went for it, but the Belarussian just has that bit more firepower. A successful event for the Brit though. Sabalenka will play the 17-year-old American, Amanda Anisimova. She went after it today and tore Brisbane runner-up and 24th seed Lesia Tsurenko too shreds 6/0 6/2. Tsurenko was carrying an injury but that’s to take nothing away from Anisimova.

Sloane Stephens beat good pal, Timea Babos 6/3 6/1 but it wasn’t as comfortable as the scoreline suggests. That doesn’t mean that Sloane was off but that Babos played well and made a match of it. There were some extended games here. Stephens has Petra Martic next. Kiki Bertens has lost in this section though. Slightly flattering to deceive in the process. Anastasia Pavlyuchenkova played superbly from a set down and Bertens couldn’t go with her. Aliaksandra Sasnovich also beat Anett Kontaveit in this section to keep up her top form. She squares off with Pavy for a place in the last 16.

Other winners today were Petra Kvitova, Ash Barty (plays Sakkari in the third round) and Angie Kerber. Kvitova plays Bencic next. Can the ‘Swiss Miss’ raise her game? As a former top ten player (pre-injury) it will be a good test to see where she is at. A big price tip of mine, in Donna Vekic, lost to Kimberly Birrell. Apparently, the Wildcard played well. Having shared a set a piece of high-quality tennis, the Aussie ran away with the decider. It is a bit disappointing from Vekic though. Kerber is next up for Birrell. Sachia Vickery is out after losing to Danielle Collins, who backed up her win over Julia Goerges in the first round. Vickery said after that she has rested her knee in the off-season but it is no better. A specialist it is for her now. Caroline Garcia is next for Collins.