Amanda Anisimova was really impressive against Aryna Sabalenka. There never really looked a way back into the match for the Belarussian. It is not often this gets said but she was outhit and out of ideas and the lack of a plan b really showed. Anisimova was blitzing winners off both wings and Sabalenka had no answers. You can see why she has been compared to Anna Kournikova, there is a resemblance. It is the inform Petra Kvitova next for the American. Kvitova was flawless in her 6/1 6/4 win over Belinda Bencic. I thought this could have at least been a test but it proved not to be. There will some titanic hitting in this fourth round encounter. If they both play as they are it will be made from primetime tv! 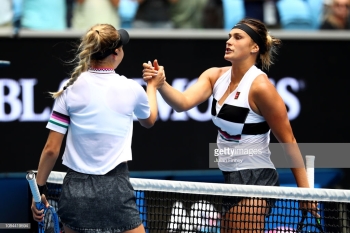 It pains me to say it but this was a pretty good performance from Sharapova today in beating Caro Wozniacki, though I am not yet convinced. Caro was probably just a little too passive at times today and Sharapova capitalised on it. At the start of the third, you felt Wozniacki was just about to get on top but she didn’t kick-on. She also led 4/1 in the first set before losing it 6/4. Ash Barty will play the Russian next after she beat Maria Sakkari first up on the Rod Laver Arena. Let’s see how Sharapova handles Barty’s variation.

Sloane still continues to make headway in Melbourne. It wasn’t pretty today against Petra Martic but she ground out a straight sets win. She was a breakdown in both sets but managed to zone in and take the two breakers. The threat with Sloane is starting to get real now. She is in this event and a threat. She plays Anastasia Pavlyuchenkova next after she destroyed Aliaksandra Sasnovich 6/0 6/3. The consistency still not quite there yet for Sasnovich. 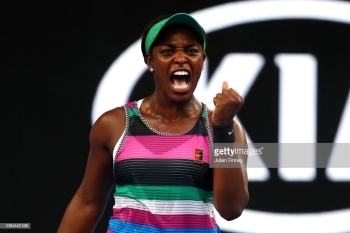 Angie Kerber took out Kimberly Birrell 6/1 6/0. The Wildcard clearly struggled with it all in the late night session. That’s a bit of a disaster going into a bout with the German. Kerber will play Danielle Collins next. Collins ousted Caroline Garcia 6/3 6/2, totally outplaying her opponent and continuing her solid form from the week. For Garcia, it is another pretty lame exit from a slam though.

Roger Federer cruised past Taylor Fritz. The American played well in the second set but Federer was easily up to the task. There was a little show for the crowd today from the Fed-Ex. He will play Stefanos Tsitsipas on Sunday. Tstisipas ground out a well earned four-set win over Nikoloz Basilashvili. The Georgian was a bit hit and miss (as he has been all event). Tsitsipas did go nuts at one point in the third set. The Umpire was starting to issue warnings and when the Greek got broke back he went into a tirade including shouting out “malaka”. Good form Stefanos, we all like a bit of feistiness. 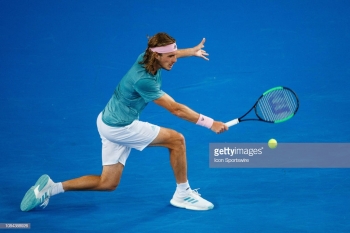 Last years runner-up, Marin Cilic, came from two sets down against Fernando Verdasco. It looked a potential banana skin, especially after Cilic said he had some knee troubles after his win over McDonald. The Croat saved a couple of match points in the fourth set and never looked back in the decider. It is matches like this that take that extra few percent out of you though. Roberto Bautista Agut will no doubt test the fitness levels in the last 16. Surprisingly, he made light work of Karen Khachanov today, outfoxing the youngster in straights. A much-needed bonus for the Spaniard after his exertions against Muzza and Millman.

I mentioned Nadal’s match against De Minaur at Wimbledon two days ago, stating the scoreline. It turns out he mirrored that again today. A repeat 6/1 6/2 6/4 scoreline was dished out. I feel for De Minaur. This is going to sound strange but it is a really bad matchup for the Aussie, as you struggle to see how he is going to hurt Nadal as it stands. He is basically a younger, smaller version of the Spaniard. The lad is a trier though and as usual, he went down kicking and screaming. It means we have Rafa v Berdych again. There used to be a fair bit of bite between the two as I am sure you will remember. Berdych stayed calmed to beat Diego ‘El Peque’ Schwartzman in four sets. I keep saying Berdych is playing well and going under the radar. We will finally see where he is at now. 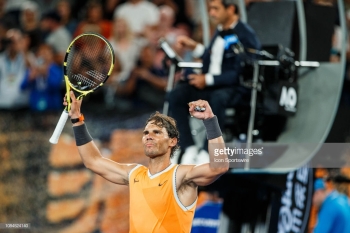 Frances Tiafoe has made his first fourth round at a slam. The likeable American outlasted Andreas Seppi in five sets. This has really impressed me as it was was a tough one to back up, having beaten Anderson last round. We all know the vast amount of experience Seppi has to his name. Taking the last two sets shows some real character here. He will play Dimitrov after the Bulgarian just about beat Thomas Fabbiano in straights. You just always felt he had too much for the Italian watching it.