In Montpellier, both the top seeds went out in their opening matches. Lucas Pouille and David Goffin lost to Marcos Baghdatis and Filip Krajinovic respectively. It left the door wide open for Jo-Wilfred Tsonga to take advantage. There were a couple of squeaky moments earlier in the week against Humbert in the first round and then again against Chardy in the quarters. In between this was a straight-set win over compatriot Gilles Simon but he really upped it from the semis. Radu Albot and then Pierre-Hugues Herbert were both convincingly beat. Tsonga said he is happy with his motivation and mental toughness so far this year. There does look to be a hunger back with the Frenchman based on early evidence this season and it is great to see. Herbert had put in a decent shift himself through the week, with wins over Shapovalov and Berdych in the semis. Definite slow improvement in his game though. Berdych ended up being very lucky to get past Krajinovic in the last eight. Having been in a winning position in the second set, the Czech saved match points and came from 5/3 down in the decider. You have to be a bit of a fan of Krajinovic on these indoors.

Local Wildcard Juan Ignacio Londero took home the title in Cordoba. He has spent most of his time on the Challenger Tour and to say it was an upset for the 25-year-old to win here would be an understatement, but what an effort. Jarry, Sonego, Cachin and Delbonis were all beat in straight sets. Delbonis was ousted 6/1 6/0 albeit with a pretty poor performance from the higher ranked Argentine. Guido Pella was one of my bets on the outright for the week (20/1) but he lost a 6/3 4/2 lead in the final to Londero. Pella had notably beaten Diego ‘El Peque’ Schwartzman and Pablo Cuevas enroute. What was most surprising was that Londero upped his forehand from the semis, producing his best tennis as the week progressed. Inspired tennis I believe they say? On a side note, reports insinuated top seed Fabio Fognini didn’t fancy it last week. The Italian was comfortably beaten by Aljaz Bedene in his opener.

Thanks to @juanlondero Twitter page for the pics used.

It was a strong line-up in Sofia. Three of the Next Gen Era (Khachanov, Tsitsipas and Medvedev) were there. Add Roberto Bautista Agut to that, to give you the top four seeds. Medvedev has had a superb start to the season. Runner-Up to Nishikori in Sydney, the fourth round of the Aussie, where he lost to Djokovic and now the title in Bulgaria. His style of play and low bouncing ball is causing havoc with opponents right now. Russian tennis looks in good hands for the next few years, with both him and Khachanov looking like top ten players. Khachanov looks to be having a slight blip so far this season and he lost his opener to Matteo Berrettini, but a blip is all it will be I think for the Russian. Tstisipas lost to a pumped Gael Monfils, the Frenchman playing well last week before bumping into the inform Medvedev in the semis. Bautista Agut was ill and pulled out before his quarter-final to Marton Fucsovics. The Hungarian took advantage to make the final but there he was no match for Daniil, who dropped his only set in his opener against Robin Haase. I quite liked Martin Klizan’s chances here at a bigger price but when Medvedev bested him 6/4 6/1 in the quarters, the writing was on the wall. 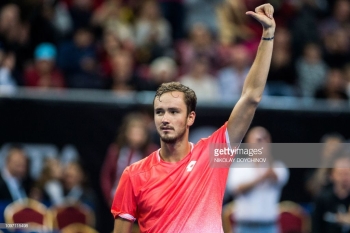 A Simona Halep inspired Romania beat a Czech team with Karolina Pliskova to reach the semis of the Fed Cup. Other winners in the World Group were France (who now host Romania) and Ash Barty helped Australia to a win over the USA in Asheville. The Aussies will now play Belarus who hammered Germany. Aryna Sabalenka dropped just five games in total against Andrea Petkovic and Laura Siegemund, over in Germany as well. Team GB played in Bath with all of Europe/Africa Group 1. Having beaten Hungary, Greece and Slovenia in the groups they beat Serbia in the play-off final. All this without dropping a rubber. It took its toll on Jo Konta though having had three successive three-setters in just three days. She felt faint against Aleksandra Krunic and said she was shaking and “felt a little bit out of body”. She regrouped in the decider to take GB through though after Katie Boulter had already beaten Ivana Jorovic. News of their World Group II tie against Kazakstan being at home will be greatly received.