I have this saying when I like someone these days that, ‘they are an exceptional human being’. Dan Evans is one of those individuals. If you are a regular reader of my blog you will know I have stuck up for this dude, left, right and centre. Since last April he has gone from unranked to the verge of the top 100 again. He has had to graft and motivate his way through Challenger qualifiers back in April and has done it in fine fashion. Let’s be honest there has never been too much help from the LTA and that will never change. They will no doubt take any praise heading their way for the Brummie’s achievements though.

Having won two rounds in Delray Beach qualies to make the main draw he claimed victories over Frances Tiafoe, Lloyd Harris, Andreas Seppi and John Isner to make the final. Showing guts and fight in particular against the two Americans and showing all his variation and skill against Harris and Seppi. In the final he held three match points against Radu Albot, losing in a see-saw match that ended 9-7 in the breaker. Evo didn’t really do an awful lot wrong on the match points and even had a call go against him which he challenged. A point he would probably have won before the intervention. He was that close here. It was the Moldovian who won her first tour title though, also taking out a grumpy Nick Kyrgios on the way. The Aussie having another pop at tennis fans for booing him after. What Nick needs to do is look at his mate (Evans) and learn from it. The attitude is spot on with Dan. I feel there will be another Evo blog in the not too distant future.

Delpo also made his comeback here, losing in the quarters to Mackenzie McDonald. Great to have you back Delboy. 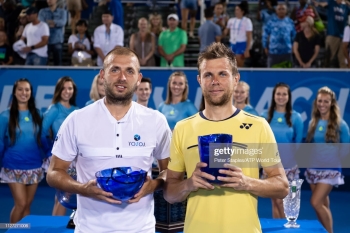 Stefanos Tsitsipas regrouped after a weeks rest and showed his class as the top seed in Marseille. He didn’t have it all his own way against David Goffin in the semis or Mikhail Kukushkin in the final but upped it when he needed to. A class act is our Stefanos. Kukushkin had been playing well all week, as wins over Shapovalov and an improved Rublev show. It sounds like his flat strokes caused opponents havoc on the indoors in France. Second seed Borna Coric lost his first match since the Aussie Open, to wildcard Ugo Humbert. The 20-year-old went to on to make the last four before bumping into Kukushkin.

Serbian Laslo Djere won in Rio. He took advantage of Dominic Thiem’s mini-slump in the first round and went onto claim the title without dropping a set. After winning the final he said ” I dedicate this achievement to my parents. I lost my mother seven years ago, and my father two months ago. They have always supported me, I am what I am thanks to them. They are the reason I am here today, and I hope they are somehow watching this achievement.” Nice words but also a very sobering thought. Good on him for taking this. In the final, he beat 18-year-old Felix Auger-Aliassime who showed his power and his potential by beating Fognini, Garin, Munar and Cuevas. Fognini really is totally gone at the moment, he has suggested that he is suffering from mental fatigue.

It was not that long ago, three and a half years roughly, that we saw Belinda Bencic beat Serena and then Simona Halep back to back to win the Rogers Cup in August 2015. It looked like that ranking could only possibly go one way. It did for a while, in February 2016 she was up to number seven in the world. Injuries and loss of form meant that she dropped to around the 200 mark. A solid year in 2018 that included a last 16 at Wimbledon have set the foundations for this season. Bencic saved six match points (and 5/3 down in decider) in the third round against Aryna Sabalenka, battled past Halep in three next round, came from 5/3 down against Svitolina in the decider and then outlasted Petra Kvitova in the Dubai final. Pretty decent wouldn’t you say? Let us see how she gets on from here but the ability and talent have always been there, that was clear in the juniors and then earlier on the WTA Tour. Naomi Osaka was playing her first match since parting company with Sascha Bajin, losing to (the badly out of form) Kristina Mladenovic. With seeds falling all over the gaff it looked as though Kvitova would take advantage but Bencic got on top in the decider and never looked back. 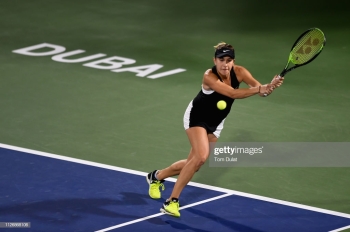 Top seed Alison Van Uytvanck retained her title in Budapest. The Belgian came from a set down in her last three rounds against Kozlova, Alexandrova and then Marketa Vondrousova in the final. She saved five match points against Alexandrova and found herself in some funky scenarios all week. 17-year Anastasia Potopova also made the semis her, losing to Vondrousova.