An example is after last weeks Birmingham derby between Aston Villa and Birmingham City. During the match,  Villa’s Jack Grealish had been struck on the back of his head by a City fan who invaded the pitch, he then went onto score the winner in a 1-0 win. The pitch invader was an absolute disgrace and that in itself is another story about the safety of elite sports players. Then some idiot took to Twitter to post a picture of Grealish’s young brother’s gravestone, he went onto say how his goal wouldn’t bring his brother back and that somehow gave this fool satisfaction. What a bell. It just shows how people have no respect and just how easy it is to hide behind a screen. Utterly disgraceful behaviour.

This is not a pop at any social media platform, Twitter, Instagram, Facebook etc. It is more about some of the individuals that use them. It’s a shame, as the majority of people use this opportunity to get closer to their heroes and its a positive thing.

In tennis, in the last few weeks, I have seen Madison Keys, Genie Bouchard and Swiss player Johan Nikles, to name but a few mention and highlight the issues players face. Regular comments made by outsiders on their pages to the tune of, ‘die’, ‘break a leg’ and ‘hope you never play tennis again’. Then you can get the racial slurs, Serena Williams and Jay Clarke along with Keys are two players that have experienced this in the past. I can imagine that every player you can name, that is on social media, will have experienced something along these lines. It is quite often a regular occurrence. It is unacceptable on every level but for ITF players to be receiving abuse considering what they earn is an absolute joke! They are not as used to being in the limelight either. 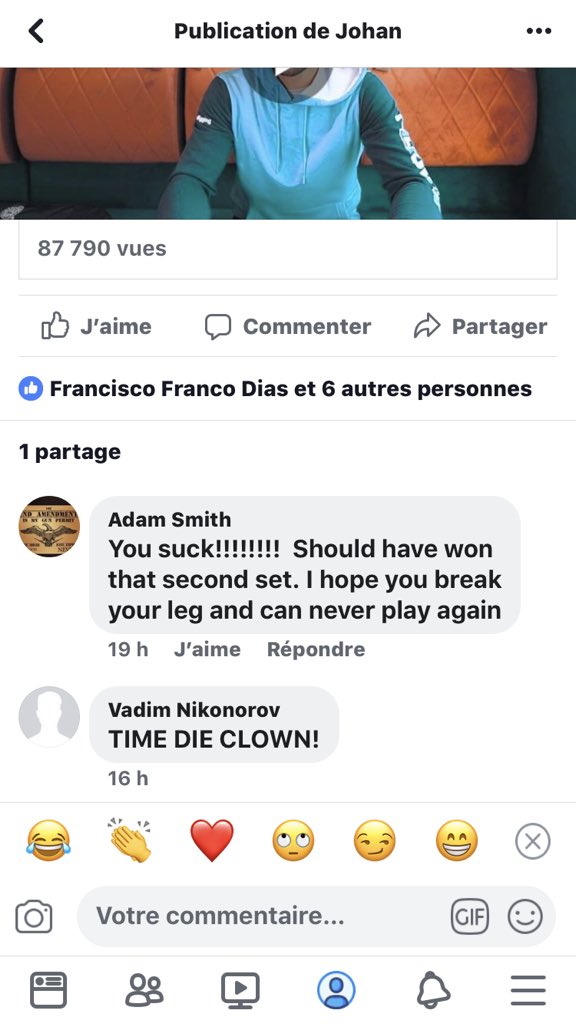 The level of tennis doesn’t matter though as there are many reasons for the abuse. Betting firms (as I know as a former tennis trader) offer tennis across the board. There is betting on main tour, challengers and ITF. Then you have your rivalries, where ‘loyal’ fans express their feelings about the ‘enemy’. Then there are the people who are bored and have their sad little lives with nothing better to do than troll people. These are just three reasons for this appalling behaviour that spring to mind.

I like it when the recipient of these vile messages fights/answers back and calls the blagger out. The bottom line is, you should never say something to anyone on social media that you wouldn’t say to their face. Sadly it happens all too often and to the extremes. It is totally unacceptable for anyone to write these sort of things to someone, let alone a person they don’t know or haven’t even met.

It is difficult to see how it will be totally cut out of society in this day and age but something needs to be done about it. It needs to be minimised as much as possible, not just in tennis but all over.