After Fabio Fognini lost to Jiri Vesely in Marrakech a few weeks ago, Fognini’s Wife Flavia Pennetta said this: “Everyone is playing well now, the easy first rounds no longer exist … He failed to prepare himself well mentally, and he took for granted things that really weren’t. He lost two or three matches that made him nervous and now he has to start again from zero.” It is fair to say that he has sorted himself out!

The Italian showed plenty of heart earlier in Monte Carlo, coming from a set and a break down against both Andrey Rublev and Borna Coric. In between this he ousted Sascha Zverev and got a walkover against Gilles Simon. To then go and beat Rafa 6/4 6/2 with some top draw tennis and winning the title by taking out Dusan Lajovic was class and it will go down as his biggest win by someway. I think the Italian is great for the game, especially as we know he has this tennis in the locker. Fabulous Fognini. 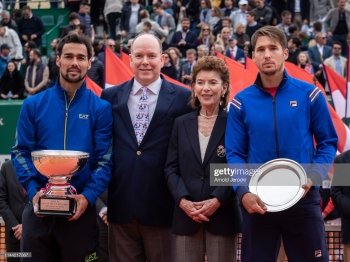 Rafa wasn’t at his best as the week progressed, despite good performances against Bautista Agut and Dimitrov earlier. The Spaniard struggled with his timing and after Guido Pella had softened him up in the quarters, Fabio finished him off in the last four. The fact that he lost raises eyebrows but I wouldn’t say it is a huge concern just yet for the G.O.A.T of clay tennis. Likewise, Djokovic was certainly under par (again) and nearly went to Kohlschreiber in his opener but it was the ever-improving Daniil Medvedev that took him out in the last eight. My oh my has the Russian impressed this season. If it wasn’t for possible fatigue, he would probably have liked his chances against Lajovic in the semis. He led 5/1 in the opening set and only won one more game. The Serb deserved his breakthrough week though having been excellent against Dominic Thiem and Lajovic had also not dropped a set until the final. No mean feat.

It was Fed Cup weekend and Ash Barty got it done for Austalia against the Belarussians in Brisbane, in the World Group. It will be their first final in 26 years. Impressive straight sets wins over Vika Azarenka and then Aryna Sabalenka was followed up with a doubles victory with Sam Stosur. They teamed up to beat the Sabalenka/Azarenka partnership. Vika was picked over Aliaksandra Sasnovich for the tie and I don’t think anyone would have argued that was the right choice. The Aussie’s will play the French on home soil in November. Simona Halep’s efforts weren’t enough and Garcia/Mladenovic took the final rubber to send the hosts through 3-2 against Romania. It is also 26 years since Team G.B have been in Group II but after their victory over Kazakstan in The Copper Box Arena, that is exactly where they will be. Jo Konta was two from two on the weekend and Katie Boulter dug deep despite a black problem to beat Zarina Diyas to give the Brits an unassailable 3-1 lead. Boulter looked in real trouble after the first day’s rubbers having lost out narrowly to Yulia Putintseva and seemed to be suffering. A gutsy effort from our ladies to get the job done. Congrats. 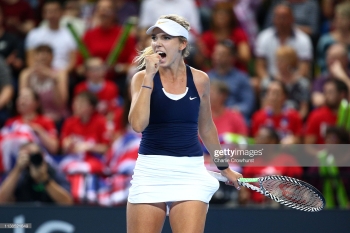 Jay Clarke also won the Challenger event in Anning, China, taking him to a new career high of 161 and jumping 50 places in the process. You will know I have always bigged up the lad from Derby and this is his second title at this level after winning in Binghamton, last July. He beat World number 80 Prajnesh Gunneswaran in the final in China. Nanchang this week is next on the agenda for the 20-year-old. Go on Jay my lad! I am really looking forward to seeing both Jay and Evo on the grass again this year. Big Fan.