Another week and another defeat on the clay for Rafa! Since being thumped by Nole in Melbourne there was a loss to Kyrgios in Acapulco and he then handed Federer a walkover in the semis of Indian Wells. The defeats on the clay to both Fognini and now Dominic Thiem in Barcelona have certainly ‘further’ raised eyebrows.

It is still not panic time yet for Rafa ahead of the French but I would unquestionably still see him as the man to beat at Roland Garros even if he does go trophyless into it. Let us see what the next few performances bring. Nadal himself said that he was a lot happier about how he played against Thiem and seemed upbeat about it. Certainly more so than he was after his wins over Leo Mayer (dropped a set), David Ferrer and Jan-Lennard Struff.

That Thiem got his clay-court swing up and running after Miami will be a great relief for him and he really showed his class in Barcelona. Schwartzman, Munar, Pella, Nadal and Daniil Medvedev were all shown the door without the loss of a set. The very fact that Thiem is now a top priced 9/2 to win in Paris shows the respect that he has earned. In betting terms it is now a competitive three-horse race. 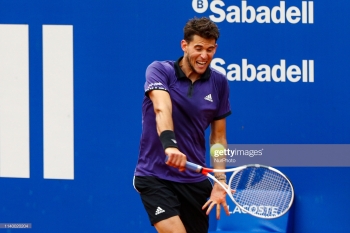 There were good weeks for Medvedev and Nishikori who faced-off in the last four. The Russian unsurprisingly showing that extra little bit of confidence, prevailing 7/5 in the decider. This was much better from Kei though. Medvedev continues to impress on the surface, backing up his semi-final appearance in Monte Carlo with a runners-up spot here.

On a final note here, Diego Schwartzman had a go at the tour manager after having several scheduling problems, not the first time he claims. El Peque isn’t usually one to complain and was handed a raw deal after failing to sign up for the event in time, thus having to qualify.

Matteo Berrettini has won his second main tour title having won in Gstaad last year. Last week he won in Budapest. The big serve and big forehand, the trademark of the Italians game, came up big at the right times in Hungary. Straights sets wins over Aljaz Bedene and then over Laslo Djere in the semis, were sandwiched by a three-set win over Pablo Cuevas. In the final, he eventually overpowered Filip Krajinovic in three. The Serb had to make it through qualies. Berrettini is still only 23-years-old in fairness and credited his backhand, in addition to the main weapons as the real key to his success. 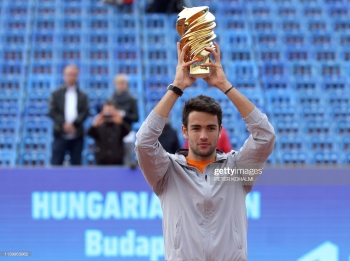 Pierre-Hugues Herbert deserves a mention too, the Frenchman has had a good start to the season and has even gone well on his less preferred clay over the last few weeks. Herbert made the semis in Hungary where he found Krajinovic too good. Could easily go pretty well on the grass this year Herbert?

The top four seeds were all out at the end of quarter-finals day. Top seed Marin Cilic was below par in his loss to Pablo Cuevas in the second round. Borna Coric went to Filip Krajinovic and Nikoloz Basilashvilil lost out to Laslo Djere, both in the quarters. Marco Cecchinato withdrew with an illness, presumably the fever he had in Monte Carlo.

Petra Kvitova has got her clay-court campaign off to a winning start on the indoors in Stuttgart. We all know that when Petra is in the mood, there aren’t too many players that will beat her. This was a competitive heat in Germany, featuring eight of the worlds top fifteen players, including Osaka, defending Champion Karolina Pliskova, Kerber and Bertens. Halep was due to play but injured herself on Fed Cup duty.

Kvitova upped her level when required as demonstrated in the last three rounds. She came from a set down against Anastasia Sevastova, played a super decider against Kiki Bertens and then a high-level tiebreak to take the title against Anett Kontaveit. Bertens was a real test and you felt the winner of that would probably win the final.

Kontaveit had some really decent results in making the final. Vika did pullout at 3/0 down in the decider in their quarter-final but the standard was high. Naomi Osaka gave her a walkover in the semis but the Estonian had beaten both Caroline Garcia and Anastasia Pavlyuchenkova very easily in the first two rounds. Vika will be pleased with her efforts too, having played very well against Karolina Pliskova. Her shoulder caused her to retire against Kontaveit.

28-year-old Petra Martic won her first tour title by winning in Istanbul. She ousted Marketa Vondrousova from a set down in the final. Her win against Kristina Mladenovic in the last eight was also of high quality, against a player who seems to be finding a little bit of form again finally. Vondrousova, (ironically) since losing to Martic in Melbourne, was runner-up in Budapest, a quarter-finalist in Indian Wells and Miami and now runner-up here. She has this ability to just coast past players and comfortably beat them. It is easy to forget that she is still only 19. Top seed Carla Suarez Navarro was sent packing in the opening round to Lara Arruabarrena, the Spaniard getting outgunned by Vondrousova 6/1 6/2 in the quarters though.