Another week goes by and another defeat for Rafa. It is now three losses on the ‘red stuff’ this season. Stefanos Tsitsipas is the latest to add himself to the list of Fognini and Thiem. A lot thought there were some good signs from Rafa last week and maybe there were in his wins over FAA, Frances Tiafoe and then especially against Stan. The bottom line is that when you look at the odds for Roland Garros, Rafa is only the slightest of favourites over Djokovic now. Generally between 3-6% with the bookmakers.

Djokovic narrowed that gap by having a week that suited him down to the ground. Fritz and Chardy got him nicely into the event, Cilic gave him a walkover, Thiem was edged out in the key moments in two tiebreaks and Tsitsipas was softened up by Rafa. A reasonable stroll in the park for the world number one, he is going for an incredible Djoko slam remember in Paris. This will have helped the fine-tuning.

Tsitsipas once again proved that he has the lot, his future looks ridiculously bright. It barely warrants me even mentioning such an obvious statement. The biggest comparison you can make is that you fancy him to win his first major before Sascha Zverev as it stands. He beat the German here on his way to the final. Federer played his first event since Miami and got a few matches under his belt to toughen him up. Thiem actually saved match points against him (as the Fed-Ex had done against Monfils in the last sixteen) before winning a high-quality contest 6/4 in the decider, in their last eight encounter.

Juan Martin Del Potro played his first event since February and lost in a decider to Laslo Djere in his opener. Delpo was pretty happy to have got through it though and said the body had reacted well after. Wawrinka had another positive week with good wins over Pella and Nishikori. He will be disappointed with his effort against Nadal but will be happy with the quarters overall.

Kiki Bertens won her first Premier Mandatory title. We know that when Kiki is on she can play like a dream and the big win for her going into the final was unquestionably blitzing second seed Petra Kvitova in the last eight. She can just dominate opponents and she didn’t drop a set all week in Madrid. Sloane looked likely to take a set off her in the semi’s but blew up a bit to lose in straights. She is always a danger when a major is around the corner through the American. Is she just getting her eye in at the moment? Bertens went onto defeat Simona Halep in the final, 6/4 6/4. Some big hitting against a below-par looking Halep delivered her the biggest of her titles to date.

Halep was actually playing for a spot at the top of the rankings again. Having beat Belinda Bencic in a top draw semi-final (well, for the first two sets), she failed to replicate the same form on Saturday in the final. Halep had looked in control most of the week, including a double bagel over Viktoria Kuzmova and a win over Ash Barty but the final looked a step too far. She was on antibiotics for the week, so maybe that had a fair bit to do with things.

Top seed Naomi Osaka lost to Bencic, the ‘Swiss Miss’ continues to impress again, the semis here is another good effort. Osaka certainly seems pretty vulnerable at the moment but let’s not forget that this is her least preferred surface. Like Sloane, she proves time and time again that she is a big game player. 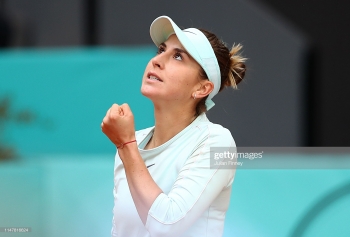 Elsehwere Elina Svitolina was never really at the races against Pauline Parmentier. The Ukranian hadn’t played since Miami with a knee problem. Angie Kerber gave Petra Martic a walkover in the second round after she twisted her ankle in training, Martic took advantage and went onto make the quarters. When you look at her form since Charleston it has been pretty decent. Fair play Petra.