It has been a bit of a mad rush to get this done in time, but here we are. Summer is in the air and you know it is time for the French. The Ladies is wide open, the Men’s, like most years, is difficult not to tip a few favourites, as they look unbeatable. I seem to have gone for the bigger prices in the Ladies and shorter ones in the Men’s, which is no surprise given the results of late. So, I will be staking accordingly. As per usual, I will work through each quarter and then the outright winner, giving my main bet and then ‘covers’ or bets people might like for an interest at bigger prices.

A highly competitive quarter that has Osaka, Serena, Barty, Azarenka, Keys and Garcia. I never know whether Osaka is exaggerating when it comes to injuries or not. If she wins in Paris I would like to think I will know she will always be a different player at a slam, irrespective of form coming into it. She says she’s fine but like with most, it is difficult to tell and she is favourite for this section. It makes it difficult to tip her up. Serena? Where is she at? She is usually a different player when it comes to the slams and I would expect that to be applicable here but it looks better to back her on the outright in that case. Obviously, she was seen in a wheelchair (precautionary) at Disneyland this week but was practicing ok on Friday, so good news there. Barty, Keys and Garcia all look beatable on the surface as it stands. Azarenka is starting to turn the screw a little but with Osaka in the second round and single digit quotes from bookmakers, it’s difficult to tip her up. If I really have to I will probably go with Bianca Andreescu, but I was hoping to get a bit bigger. I am tempted by Maria Sakkari too. Not a section I am very confident on. Yes partly because of Serena but there are so many doubts over a number of players.

My bets – Probably a small bet on Andreescu at 14/1 and a very small cover on Sakkari at 20/1. Not a section to do much on though.

Simona Halep is a worthy favourite for this section as she looks to retain her title in Paris. There is just not enough form for me to say she will romp this quarter, though she is in the good section of it. Also, how will she handle the ‘defending champion’ tag? Kvitova obviously has a decent chance but again I will look for bigger prices. Let us try with Anett Kontaveit and the juicy prices about Amanda Anisimova. They could square-off in the last 32 but should they both reach it, then you will at least know you have a runner that is only two wins away from the quarter. They are in with Sabalenka who is obviously at her most vulnerable on clay.

My bets – I will again have a small bet at the 12’s to 14’s on the Estonian and will see if I can get some of the 33s on Anisimova. I would avoid taking the 16s on the American, these firms think she has a squeak too.

I will be taking on favourite Kiki Bertens here. The game might be there for Kiki and the win in Madrid will do wonders for one’s confidence, but I went with her at the US Open last year and she came up short and I feel she will here. Jo Konta will like her chances (like in Rome) in the third round against Bertens and she has a shot at this. I don’t really like Svitolina’s chances either. I always feel like Sloane is a big event player and Muguruza’s form in Paris demands respect. Sloane loves Paris and I just trust her more than the Spaniard, this is something I might regret here. Belinda Bencic looks to be in a nice section of the quarter and I expect her to go well. 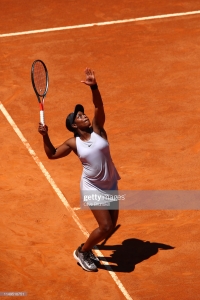 I will again take on the favourites in this one. I know Pliskova won in Rome but I am still unsure on clay, massively. I also think the same about Angie Kerber, so that is why I will back Marketa Vondrousova. I like the Czech’s chances. She has proved how decent she is across the board. She will hopefully catch Kerber cold in the second round. Sevastova would be another nasty match in the last 16 but it’s not going to put me off. Dayana Yastremska is also in this section but winning Strasbourg may take its toll. Kristina Mladenovic has been finding some decent form again, but at the prices, I would rather side with her potential second-round opponent, Petra Martic. Very useful is the Croat when the body is fit.

I will go with the 16s on Sloane each-way and Andreescu either each-way at 66/1 or 75 on Betfair Exchange. I will also back Serena at 18/1 to make a few quid, I am biased but think it’s worth a go at the prices (but not my main bet). The fact that it’s a crazy world out there on the WTA right now means I might as well have a few quid on Martic at 200’s too.

It really is difficult to see past Nole here if you ask me. Sascha Zverev does look to be slowly finding form again and he is all about the confidence. Having said that, I just don’t see a run like twelve months ago for the German right now. Even though his win in Geneva this week will do him no harm going forward. I actually see Borna Coric and Fabio Fognini as the main dangers. Borna does worry me at times though and has had some poor losses to date at the slams. Fabio, what can you say? There are ongoing problems with a leg injury and that is a worry in its own right. Nole, on the other hand, looks in good form after Madrid and Rome and I actually thought he would be shorter than 8/13.

My bets – It won’t get you rich but backing Nole at 8/13 or 4/7 here looks like buying money. If you want to go for a run for your money type bet, for me its between Coric and Fognini. The Italian has a 0-8 record against the Serb and Coric is 0-3. You wouldn’t want to be on the Italian between 7/1 and 8/1 but if you can back the 14/1, that is more like it. Coric is about the same mark. Personally, if you wanted to back either of these I’d rather take the 100s and 150s each-way on the outright. Nole it is for me though.

I am going to take Dominic Thiem on here, though I have a lot of respect for the Austrian, especially on this surface. Last years runner-up looks to have a good draw early doors but for some reason, I just have a feeling one of the players who have had considerable injury woes will win this. I am going to go with Del Potro and Monfils. It is a risk I know. I just feel that Del Potro saves his best tennis for the slams and Monfils saves his best for here in Paris. Delpo has some tough matches early on in Nicolas Jarry and FAA but it might well keep him on his toes. Monfils may have to face Verdasco and Thiem to get to what would hopefully be the dream quarter against DelBoy. Karen Khachanov is another player that I am a bit of a fan of and he has started knocking together a few wins but not enough for me to fancy him this time.

I think this is the most competitive quarter by a mile in the men’s and the odds would agree with me, with Stefanos Tsitsipas the jolly at 11/4. It is a quarter that includes Federer, Stan, Garin, Schwartzman, Cilic, Berrettini, Ruud and Cecchinato. I am at a point where I think Tsitsipas is pretty trustworthy, time will tell but his game and his maturity have impressed many people. It is a bit of a minefield this section though and a lot can go wrong with the talent on show here. Diego Schwartzman has played well here in the past and we all love ‘El Peque’. Matteo Berrettini might fancy his chances of replicating Marco Cecchinato’s run this year. Garin and Ruud have been playing really well but it might be too soon. I have been keeping tabs on Stan but I have not seen enough to make me think he will win five matches here with this draw. Federer, you would think has one eye more on SW19. 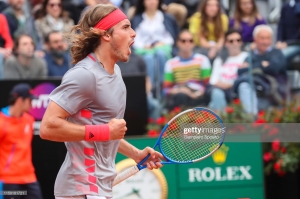 Rafa must be secretly buzzing about this draw I think. Goffin in last 32, followed by Pella and then Nishikori or Medvedev. I think Medvedev is the biggest danger but he has a rough route to even get there. Hugues-Herbert, Paire (this weeks champion in Lyon) and Nishikori lie ahead of him. There isn’t a lot of point in boring you with the ins and outs here.

My bets – Either back Rafa at 1/4 or 3/10 or save your money. I don’t tend to get involved at those prices. If you are desperate to oppose the Spaniard then Medvedev looks the best player equipped to do it but the quotes of 10/1 are far too short. There is 16’s and 18’s about but I think this looks a very good section for Rafa, not that he needed it.

I just have this feeling that Djokovic will beat Nadal in this years final. Time will tell whether I was right to be less concerned about the victory in Rome for the Spaniard. His record here is incredible, it goes without saying. I just do not trust him enough at slight odds on this year though and that is unusual for me. Off the back of this, Djokovic on the exchanges at just over 3/1, Del Potro each-way at 66/1 and a little tickle on Tsitsipas at just over 25/1 on the exchanges will be my bets.

If you wanted to back the ‘cover bets’, you won’t do too much damage if you stake accordingly. For the time being though, I will stick with the three.