I said in my preview that I wasn’t sure about Angie Kerber and Anastasia Potapova has ousted her 6/4 6/2 straight away. The former junior world number one and 2016 Wimbledon girls champion totally outplayed her opponent. The fact she is making a mark should be no surprise as she beat Dayana Yastremska in that Wimbledon final and she ain’t doing too badly herself!

Sloane got her campaign off and running with a straight sets win over Misaki Doi. It wasn’t great from Sloane from what I saw here, but she always looked to have enough in the tank to get it done today. She admitted she had a few nerves but that is normal amongst players in the first round of a slam.

Garbine Muguruza came from a set down against the big-hitting Taylor Townsend. She solved the issues though and was quite comfortable in sets two and three. Elina Svitolina won the last five games of the second set to come through 6/3 6/3 against Venus Williams. Venus will feel a lot more at home on the grass next and will be looking to get a few results. The second seed, Karolina Piskova had far too many weapons for Madison Brengle. She will be relieved to see that Svetlana Kuznetsova lost to Kristina Kucova, a result that I am very much surprised about. I was quite looking forward to seeing her play Pliskova in the second round.

A match that may go under the radar in the second round is Petra Martic v Kristina Mladenovic, though it will be on a show court, so maybe not. Martic warmed up for it by losing just three games against Ons Jabeur. Mladenovic had a few problems against Fiona Ferro in a big-hitting contest though. Ferro served for the second set but faltered and Kiki got over the line in the breaker.

There were also easy wins for Belinda Bencic (though she did have to come from a break down in the second) against Jessika Ponchet and Marketa Vondrousova, who beat Yafan Wang 6/4 6/3. She will face Potapova next.

The top faces in the men’s had a bit of an easier day of it. Federer strolled past Lorenzo Sonego and Tsitsipas did the same against Maximillian Marterer. Nice matches to get them both into the event. Tsitsipas will play the Bolivian, Hugo Dellien next. A player that is playing well, I actually backed him to win in Geneva last week and he only just came up short against this year’s champion Sascha Zverev in the last eight. Federer will play another player that idolised him growing up in Oscar Otte. Do you reckon the Fed-Ex gets bored of it?

Diego Schwartzman once again proved a tough nut to crack. Marton Fucsovics was a nasty first-round encounter and the quotes of 1/4 about ‘El Peque’ looked short. He outlasted the Hungarian in a topsy turvy five-setter as he does. Schwartzman just has that bit more quality in the rally and he has certainly survived a potential banana skin here. 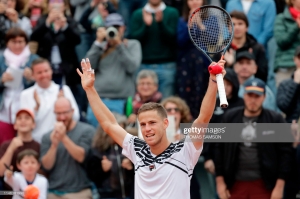 The (new) Court Simon Mathieu was treated to an absolute cracker, as Nicolas Mahut came back from two sets down against last years semi-finalist, Marco Cecchinato. The crowd really got into this and Mahut responded. Nico claims it is his best win in Paris and it would probably be difficult to argue that. He is suffering from back pains which could be a problem going forward here. 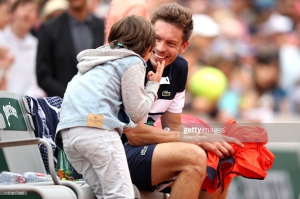 I caught a bit of the end of Laslo Djere v Albert Ramos Vinolas and I have to say the Serb looked to be hitting the ball very well. I am surprised he has beaten the Spaniard as easily as this today, 6/3 6/2 7/6.

Matteo Berrettini hit his way past Pablo Andujar. This looked a nasty one for the Italian but after dropping the first set he found his rhythm and hit through Andujar. Casper Ruud gave Ernests Gulbis a bit of a hiding, 6/2 7/6 6/0, I think we can surmise exactly what happened there in the third.

There were also comfortable wins for Marin Cilic, Kei Nishikori and David Goffin, no sets dropped there.

On to day two.