What did you expect today? Of course, it was straight sets wins for Rafa and The Fed-Express. Some might even say Rafa tanked the third set, only winning it 6/4, tut tut! I clearly mean no offence when I say that this is just getting the preliminaries out of the way, such is the gulf in class, especially on the dirt for Nadal. Oscar Otte gave it a go against his idol, Roger Federer and kept it very respective. It wasn’t all plain sailing this. Casper Ruud will be his next opponent after he beat Matteo Berrettini, this was very impressive from the Norwegian. I thought the Italian would go a few rounds here. David Goffin should provide Rafa with another good matchup.

Mr Tsitsipas was made to work against Hugo Dellien. The Bolivian has been playing at a good level recently and he continued that today. This had the potential to go the distance when Stefanos trailed by a break in the fourth, but he turned up the gas again to take it on a breaker. He will face Filip Krajinovic next after he won a marathon against Carballes Baena, 8/6 in the fifth (he could/should have won in 3 or 4 sets).

Nicolas Mahut continued a dream run by ousting Kohlschreiber 6/3 6/3 6/3. The crowd were buzzing again and Mahut turned it into a match on a faster surface. Well played to you, sir! Stan Wawrinka battered Christian Garin. This will go down as a bit of a lesson when he looks back on it, the Chilean. Stan has received rave reviews for this performance. Rightly so, 6/1 6/4 6/0 and Garin has been in top form. Stan faces Grigor Dimitrov for a place in the last 16 after he beat Marin Cilic, who became the biggest casualty in the men thus far. A high-quality match by all accounts.

There was another win for Wildcard Corentin Moutet, Moutet outplayed Guido Pella, that’s a really good win. The Frenchman almost lost a 5/0 lead in the fourth but recovered to take it 7/5 and with it, the match. He will play Juan Ignacio Londero next after he beat a not-match fit Richard Gasquet. Jo-Wilfred Tsonga said the level of Kei Nishikori was too high for him after the four-set loss. Nishikori now faces a tricky one against Laslo Djere and I think he will give him a right game there. Pablo Carreno Busta gave Alex De Minaur a bit of a hiding. PCB will really like his chances of going another round now and is a slight favourite to beat Benoit Paire. That is because Paire went 11/9 in the longest match of the day against Pierre-Hugues Herbert. Paire was coasting at 6/2 6/2 but then had a lapse in concentration. I think he will pay for that on the back of a long week, last week.

I feel sorry for Kiki Bertens. She had to pull out today with a gastrointestinal illness when 3-1 down to Viktoria Kuzmova. She woke up early in the morning and was not in a good way. She gave it a go but said after that maybe it was a mistake. She had no energy today and it’s a cruel way for her to exit the tournament. She must have really fancied her chances here too. Kuzmova will play Jo Konta, who got over the line the hard way against Lauren Davis. It is another win for Jo in Paris though, she’s making a habit of it. 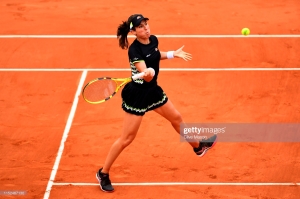 Sloane beat Sorribes Tormo. It looked like it was going to be an easy afternoon for Stephens, then the Spaniard started mixing it up and even served for the second set a couple of times. I don’t think it was a bad thing for Sloane to have a good test in the second. Polona Hercog has the ability to cause her problems next up. The Slovenian made hard work of Jennifer Brady, 8/6 in the third.

There will be a mouth-watering tie in the next round when Garbine Muguruza takes on Elina Svitolina. Muguruza was much improved in beating Jo Larsson and Svitolina was given a walkover by Kateryna Kozlova, she had a viral illness. The signs are looking ok for Garbine early doors. I did say that I thought the Spaniard was the biggest threat to my tip, Sloane.

Petra Martic ended Kristina Mladenovic’s hopes. Another top performance from the Croat. I think she has a real shot at Karolina Pliskova in the next round and so does she. Veronika Kudermetova backed up her victory over Wozniacki and will play Kaia Kanepi. Other winners were Elise Mertens and Anastasija Sevastova, that will be a toss of a coin when they meet on Friday. Marketa Vondrousova will play Suarez Navarro next after putting in a pretty accomplished performance against Anastasia Potapova. Maybe there was a bit of a comedown for Potapova after her win over Angie too. Finally, Belinda Bencic is struggling against Laura Siegemund, it has been held overnight at 4-4 in the third. Is Siegemund rolling back time there? 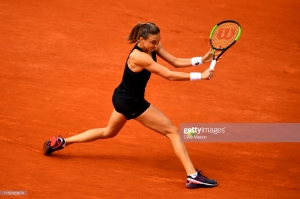