As Rafa stood on the baseline at 5/1 and 40/30 on serve, with his second championship point, I had one of those moments. I thought of the Rafa fans and how proud they must be, how much they must be buzzing and I felt nothing but happiness for them. How do you write a blog like this? It happens every year and every year I find myself saying the same things. I think I read he is now 93-2 in Paris. That really is something special. Let us put this in perspective, people rave about Federer’s exceptional Wimbledon record and rightly so, but his lifetime at Wimbledon is 95-12. That shows just how incredible Rafa’s achievements are in Paris. He didn’t come into this in the best form he had ever been in, far from it. It started to click from Rome on though and that is hitting the front at the right time. 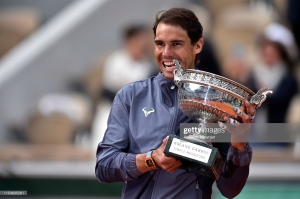 For two sets today Dominic Thiem lived with him but as suspected the long semi-final against Nole did not help on the run-in. It does make you wonder how close he may have been able to take him? Let’s be under no illusions though, getting closer is one thing, beating him is another dimension. On the plus side for Thiem, there is no doubt that he is closer to Rafa on clay now than he was twelve months ago. The standard was very high for two sets today and he can at least take that away from today’s defeat. There was the usual amount of absurd winners and rallies from both players. That is how it is at this level in this day and age.

You get the impression with Rafa that he has had just as much pleasure with ‘la duodecima’ as any of the previous eleven. It was asked after if the group were closing in on Rafa at Roland Garros? Thiem has yes but I am not sure anyone else can claim the same, especially when it comes to talking about the Coupe des Mousquetaires. 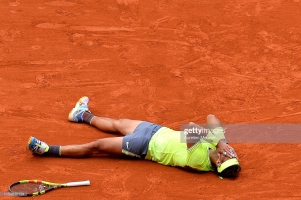 On a quick sidenote, Dan Evans has won the Surbiton Challenger. Evo beat Viktor Troicki in the final and this is the perfect preparation for the upcoming weeks. It is a win that takes him up 70 in latest rankings. Great effort lad, Keep it up. Alison Riske won the Ladies ITF there, she obviously has known grass court pedigree. This event can usually be a fair guideline to players that may cause a few upsets or have a run at the big ones. In Evo we trust. 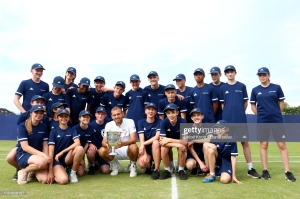