Queens Club saw the return of Andy Murray, in the doubles. Happy days. It is fair to say his partnership with pal, Feli Lopez, clicked as they went all the way in West London. It was great to see Muzza back out there, how we have missed him. Onto Eastbourne with Marcelo Melo now and then to SW19, where the Scottish will partner Pierre-Hugues Herbert.

Feli Lopez was also given a Wildcard to the singles in London as the 2017 Champion and duly obliged by showing how specialised grass can still be as a surface. The usual power plays were involved from the Spaniard, but what he does so well on the grass is stay in the points with plenty of slice, giving his opponents no angles. He was a set and a break down in his opener to Marton Fucsovics before prevailing and then got a walkover against Delpo (who has worryingly had another op on his knee). From here he beat Raonic, FAA and Gilles Simon in the final. Simon had marathon matches all week, going the distance in every round. There were good wins for him though, over a rusty second seed Kevin Anderson and Daniil Medvedev in the last four. Dan Evans two week winning run came to an end by Stan Wawrinka, but you always felt Evans might feel the effects of a third straight week. Felix Auger-Aliassime had another good week after being runner-up in Stuttgart. He took out top seed Stefanos Tsitsipas on his way to the semis, it was only Lopez who had too much for him. FAA looks some player on grass mind. Elsewhere, Nick Kyrgios accused the line judges of trying to rig his match against Carballes Baena. Then when he lost to FAA he said they should be fined when they have a bad day. Classic Nick!

The Fed-Ex won his tenth title in Halle on the weekend, but as usual, there were a few uncomfortable moments on the way. Jo-Wilfred Tsonga rolled back the years in their second-round encounter and Roberto Bautista Agut played well in the last eight. It wasn’t bad from Fed though as he exercised the demons of the US Open by beating John Millman in his opener. Later, he coasted past Pierre-Hugues Herbert and then eventually David Goffin after a tight first set in the final. The week seemed to be all about fine-tuning the forehand and baseline game and it was mission accomplished. Second seed Sascha Zverev lost in the last eight to Goffin, who had another really good week on the grass and looks to be finally finding his feet again. Third seed Karen Khachanov lost to Matteo Berrettini who made the semis having won in Stuttgart last week. The Italian serving well and hitting his forehand and slice backhand nicely once again. Defending Champ Borna Coric withdrew when a set down to Herbert with a back complaint on Friday.

Ash Barty won Edgbaston and took with it her twelfth straight win and The World Number One Ranking. The other bit of news was that I got my picture with Venus Williams on my trip to Birmingham. Rena and Venus pictures in one year, can you believe it?? A dream come true and a ‘I have just won Wimbledon/fallen to my knees moments’. This will soon be found on my Twitter page for the record. Anyway, back to business. Barty has been absolutely sensational of late and right now she looks so mentally stable, her variation has also been too much for everyone in sight. She settled straight back into grass court tennis, in what was, as per usual, a strong field in Edgbaston. Naomi Osaka was out of sorts again and got easily beaten by Yulia Putintseva, she doesn’t seem a happy bunny right now. Karolina Pliskova lost an (understandably) extremely edgy contest against her sister, Kristyna Pliskova, in a final set breaker. Karolina chucked a few doubles in for good measure near the end. Svitolina and Sabalenka still look out of form after their early exits to Gasparyan and Su-Wei respectively. Jo Konta was ousted by Jelena Ostapenko, who was blitzing winners all of the gaff. That continued until she blew up against Petra Martic from a set and 4/0 in the quarters. Julia Goerges made the final though, having beat the Croat in the semis. It was only last year she made the last four at Wimbledon, remember? Venus also played pretty well here, making the quarters but then running into Barty.  It would be great to see her go deep at Wimbledon again, and if she gets a reasonable draw that is more than possible. 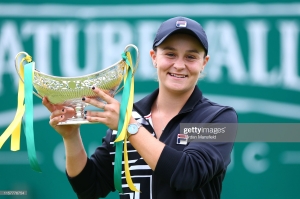 Sofia Kenin has won her second title of the season, having won at the start of the year in Hobart she has now added Mallorca to the CV. It also meant she continued her good form from the French Open where she beat Serena. Whenever I watch her, she looks a very solid player I have to say. Kenin fought back from a set down here against Elise Mertens and took the 2017 Champion and last years runner-up, Anastasija Sevastova out in three in the semis. She showed a lot more composure in the final than Belinda Bencic, who actually had three match points. ‘The Swiss Miss’ had taken care of Angie Kerber in the semis. Kerber had looked pretty good after her wins over Maria Sharapova and Caroline Garcia but had initially looked rusty against Ysaline Bonaventure in the first round. Bencic seems to have her measure by and large when they meet though. 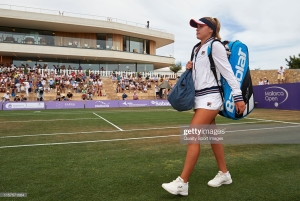 Eastbourne, Antalya and Wimbledon qualies this week. A trip to Roehampton is on the cards for myself too.