I always remember the old court two (the graveyard) but it’s newer version is doing a capable job itself. There was a list on the BBC that showed this years casualties and it is alarming.

Ash Barty was the first to go today when Alison Riske continued her superb form. Riske really held firm in the latter stages here and it was very impressive how she closed it out. There were no nerves today. I thought she must be on her last legs by now but she has proved me wrong, she is riding the high wave of confidence. I kept saying Barty may get caught cold and when Riske kept her level today the Aussie couldn’t go with it. Riske has got through a very tough draw here and is certainly match tough. Karolina Pliskova then lost on the same court straight after. She has flattered to deceive again on the big stage. She had her chances today but Muchova just didn’t go away. Pliskova getting broke at 11-12 in the decider also denied us our first chance of seeing a tiebreak under the new format here. How will Muchova recover in time for tomorrow? I am not saying she can’t but it is going to take a big effort. Having said that she hadn’t dropped a set before today.

Serena put in a solid performance against Carla Suarez Navarro. The 6/2 6/2 win probably isn’t as easy as it looks but it was always fairly comfortable. Four down, three to go now. She won’t be able to take Riske lightly by any stretch. Henman was right when he said that for Rena it is one match at a time. There is no point in getting too far ahead of ourselves. It was nice to get a quick victory today but the hard work starts here now, starting with an inform grass court specialist in Riske.

Jo Konta came past Petra Kvitova, whos level dropped after the first set and she said that she was struggling with her movement after. There were question marks coming in over her fitness and maybe this was a match too far. It was a step up in level from what she had faced so far, especially as Jabeur wasn’t right and Mladenovic is not at peak level right now. Konta served pretty well again and took control after dropping the opener. She will play Barbora Strycova on Tuesday after she came from a set and 2/5 down against Elise Mertens, who picked up a lower back injury in the second set. She may have got a bit of luck today but she has been playing well on the grass, as she has done before.

Elsewhere, Cori Gauff’s run came to an end, what a tournament though, it will be very interesting to see her at the US Open. Halep stood firm today and that bit of experience was enough here against a player that wasn’t feeling 100%. Halep will play Shuai Zhang who beat Dayana Yastremska. It is fair to say there were a few nerves here, especially in the decider as the pair traded four breaks to start it off, but from there Zhang cut down on the errors. I don’t see why she doesn’t have an outside chance against the Romanian. Elina Svitolina beat a compromised Petra Martic, who injured herself at the end of the first set and wasn’t the same after. Disappointing as I thought the Croat could go a few more rounds here.

I will be on Centre tomorrow. Get in!

In the men’s, the top seeds had a lot easier time of it. Djokovic had absolutely no problems against Ugo Humbert. Matteo Berrettini never really turned up on Centre Court and certainly didn’t do himself justice against Federer and Rafa took Joao Sousa apart, in a very comprehensive beating. Ironically Schwartzman and Evans (who lost to Berrettini and Sousa) would have had better matchups against Fed and Rafa. Beating them would have been an exceptionally tall order but they would have been more competitive matches for sure. 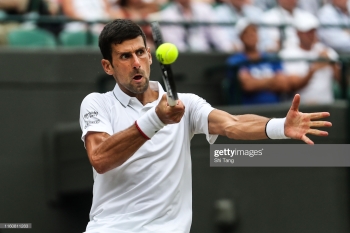 What an effort from Guido Pella to come from two sets down against Milos Raonic. He has shown a lot of discipline in his matches when push has come to shove. Raonic did serve for this in the fourth but after that Pella had the advantage of serving first in the decider. As you would expect, once in the point, the Argentine would fancy his chances. Pella plays Roberto Bautista Agut on Wednesday. The Spaniard is still yet to drop a set after increasing his head-to-head over Benoit Paire to 9-0, who said he had an abdominal tear after. He has gone under the radar so far but if you read my preview I did say that I liked his chances. His work is not yet done though, he will need to be on this as Pella is game. 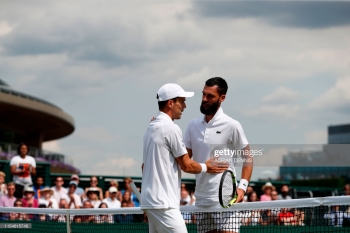 Other players making it through to Wednesday’s quarter-finals were David Goffin, he showed his usual battling qualities to beat Fernando Verdasco, he now plays Nole. I have said it before but it is nice to see the Belgian back in some form. Sam Querrey beat Tennys Sandgren, just having a bit too much on serve for his opponent. Another good showing here though from Querry and he will at least look to test Rafa. Kei Nishikori ended Mikhail Kukushkin’s run. There were a few problems here and Nishikori was stretched but he will play Federer in the last eight.

On we go to Ladies Quarters.