People always ask me the polite question, ‘did you have a good day?’ The truthful answer to that 99.9% of the time is that it depends on results. On Saturday it was a good day but was badly, badly marred by Evo losing to Sousa, thankfully Rena won. Today thankfully worked out well. 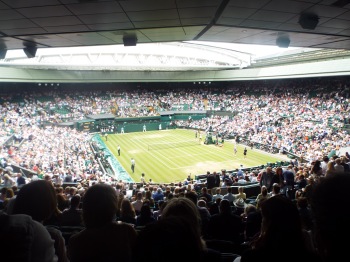 I knew Riske was playing well coming into this, we all knew that. If you didn’t before you had to take note at the performance against Barty. This was better again from Serena. Frustrating and tense from the stands for parts but the serve and forehand were working nicely. She struggled to pull away from Riske but after a few nerves from the Surbiton champion, Serena broke for 5/3 in the decider and served it out in style, finishing with yet another ace. 19 Aces today and 49 winners, this is much more like it. It was a commanding display and then when push came to shove she made Riske go for more on the second serve in the latter parts and it produced a few key doubles.

Riske really tested Rena and when I look back on it, the standard was high but at the time all you are concerned about is getting the win. There was a lot of respect between the two as the handshake and the complimentary things said about one another after tell you. Five down, two to go. One match at a time. Let’s go!

Next up Jo Konta got off to a flyer against Barbora Strycova but in fairness, you felt if Strycova started imposing her game a little more she would cause problems, even in those early stages. Konta has taken a lot of flack for the way she fell away from 4/1 up in the first as her press conference proved after. I think she was pretty honest with all her responses and the questions were over the top in all honesty. She has to be disappointed with the way she played from there but Strycova kept it all in mentally. I thought at *5/1 in the second there might be a few nerves or slight loss of concentration but there wasn’t. Very Impressive. I hope some of you who read my preview and like a bet backed her for the quarter, I am quite pleased with this effort. Strycova can certainly be a tricky semi-final for Serena and Rena will want to assert her dominance quickly.

I think seeing Muzza and Serena play in the mixed doubles in the evening will probably be one of those moments I will always remember. For me, it is an iconic moment. It obviously helps they are two players I have the utmost respect for but it really is a special moment. We don’t get to see this very often and it was an honour to see two masters at work. My girlfriend agreed with me too so I must be right. They both seem to be enjoying it now and having a bit of banter. Happy days. I felt for Fabrice Martin and Raquel Atawo, the crowd was so partisan but in fairness what do you expect? It is not just me that is feeling the MurRena vibes. Serena was thumping the Martin serve back. Awesome. How I have missed Muzza though. What a guy. They play top seeds, Soares and Melichar next.

Over On Court One Simona Halep and Elina Svitolina were busy taking care of Shuai Zhang and Karolina Muchova. Halep was struggling early doors but once she found her level it sounds like Zhang just couldn’t go with her. Muchova said she was struggling physically and it probably does come as no surprise really after the 13/11 with Pliskova just 24 hours previous. This is not a semi-final lineup I was expecting to say the least but they cannot be taken lightly, as obvious and generic as it sounds. Both players had some edgy moments earlier on in the tournament but they have stood firm where others have failed.

Onto the Men’s Quarter-Finals now.