As usual, this year I did the rounds of some of the finest English grass-court tournaments. I thought I would share my experiences with you. There is that buzz that comes with the grass-court campaign. I can smell it in the air every single year.

I simply love a trip to Surbiton. The comfortable Surrey lifestyle and atmosphere makes for a very relaxed event. Of course, that fact that it is a Challenger Tour/ITF Women’s level event helps to make it more intimate but the players are walking about and very much left to their own devices. In years gone by I have been on the hassle for a photo or two here but I left Nick and Thanasi etc get on with it. I went mainly to watch Dan Evans and he duly obliged with a very tidy 6/4 6/4 win over Ruben Bemelmans and went onto win (Nottingham) back to back Challenger titles. I met up with a few pals after and had a few beers onsite and went onto watch James Ward v Sergey Stakhovsky and then a bit of doubles action. An easy place to grab an alcoholic beverage. I cannot recommend this event highly enough, I paid £9 admission on Wednesday, great value. A must for any tennis geek. 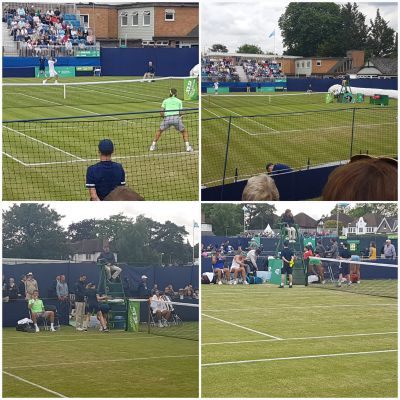 After visiting this event for the first time a few years ago I quickly gained a liking for it. Set in what I would describe as a like for like, Birmingham’s version of Surbiton. You get the grass-court vibe of greenery when you are in the vicinity. For a WTA main tour event, this is a fantastic tournament with a world-class entry list. A superb event with a chilled atmosphere. From what I remember this was £37 to be on Centre Court but the lineup was class. Ash Barty v Donna Vekic, Venus Williams v Aliaksandra Sasnovich, Jelena Ostapenko v Jo Konta and Kristyna Pliskova v Karolina Pliskova. Ostapenko was lights out against Konta. I also had a mosey around the outside courts and chilled watching Petra Martic v Margarita Gasparyan. A great day that was topped off by getting a cheeky little selfie with Venus up in Birmingham.

This is also right up there for the tennis geeks (loads of clapping hands emojis). Bravo. This event at Roehampton is perfect for the anorak followers amongst us and a family day out with people taking their deckchairs and hampers to sit, eat and drink courtside. Tickets are priced at £10 each. There is a saying amongst gamblers that you can’t eat value. At £10 a ticket you can. I watched bits of Popyrin v Moraing, Arnaboldi v Moriya, Bucsa v Murray, Bonaventure v Taylor, Lepchenko v Kerkhove and even match point in Lisicki v Raina. The special performance of the day was reserved for Coco Gauff in beating Valentyna Ivakhnenko. I went with my girlfriend and after hearing a lot about Coco we were very impressed with what we saw. Bizarrely, I said that her style reminded me of a certain Venus Williams and purely based on that performance she would have every chance of beating Venus. My pal laughed, the rest is history. Either way, one is a legend in the making and the other has already reached that status. I needn’t say any more about Coco’s talent, ability and level headiness. Fantastic. She also had praise for my Lil Wayne t-shirt after a quick photo, so she has a sound taste in music too.

It is Wimbledon, absolutely buzzing. After a week at work, I couldn’t believe my luck when I looked at the Order of Play for Saturday. Exactly how I would have scheduled it myself. First up was Rena against Julia Goerges and last on was Dan Evans against Joao Sousa. There is no secret about my support for Serena and Dan Evans is my favourite male player. The very fact that Konta v Sloane was sandwiched in between was a nice bonus. That was one I could relax in, two players I like. The crowd obviously didn’t feel the same way and roared Konta on in her fightback. I was worried about Rena playing Julia Goerges, last years semi-finalist who lost to Williams back then is a very dangerous opponent. Serena had her measure though and it was all pretty relaxing for me. Then Evo happened!

I was pretty pumped for this, especially after my In Evo we trust. Let’s ‘ave it! blog. I have to say the atmosphere was class, at times maybe a bit too much and a distraction for the players with people shouting out during points. It was like a football match. You give me that opportunity and I will be all over it. Respectfully of course. Plenty of shouting between points and celebrating and then charging down the aisle for a vape break fist-pumping after Evo took the fourth set. What a match, top standard. I was absolutely gone after Evans lost and made for a quick exit though. It was only after reflecting I could appreciate that side to it. Without a doubt the match of the grass-court campaign that I was present at. Just not the result I was looking for. Sousa played well, fair play. It was like his final and both players left it all out there. Tickets were about a ton. I did manage to get some food in amongst all this, a stir-fry. It was about a tenner with a drink. The food at Wimbledon is not cheap but it is immense. Fair play.

Last eight club at Wimbledon. Straight in here with Serena, she was playing the inform Alison Riske. The standard here was high and I was pleased to see Serena play to this level, so quickly. Riske played really well but the serve and groundies were firing from Rena. Konta V Strycova took the sting out of the crowd here. They were totally stunned when Strycova deservedly took out the Brit 7/6(5) 6/1. It all got off to a good start for them but quickly turned in the Czech’s favour and there was no looking back. Then we got to see the MurRena combination. An absolute delights for us. Happy days. I would like to think I will remember this pairing for a long time. It is not often you get two players who you rate so highly teaming up in mixed doubles together. Gold dust. Great atmosphere for it too, everyone was well up for it and they responded with a straights sets win over Fabrice Martin and Raquel Atawo. Tickets were about a £140 each, not cheap when you go with the GF, but it is the quarters of Wimbledon. Rena won and so did Rena/Muzza, so it didn’t matter! It was well worth it. Plus we took a decent picnic and had it with us for the duration, so food and refreshments were instant. Gin and Tonic for the record on the day.

Another trip on finals weekend and £200 for the privilege. It is what you expect these days. The problem was Serena was beaten in under an hour by Halep and I was out of there after some quick reflection. It was just one of those days where everything the Romanian did turned to gold and Rena wasn’t at her best. Still, an incredible effort to get that far with so little game time but I was obviously immensely disappointed as a fan. Halep can be very pleased with her performance here and you could see she was playing with a lot of freedom, with little expectations coming into the grass season. I stayed around for the presentations and speeches and then made my way out of Centre, I had a quick vape, I sat on the outside courts, chilled and left. The good news is you can give your ticket in at the resale, so someone could go and watch the men’s doubles and mixed doubles finals. Only fair really. 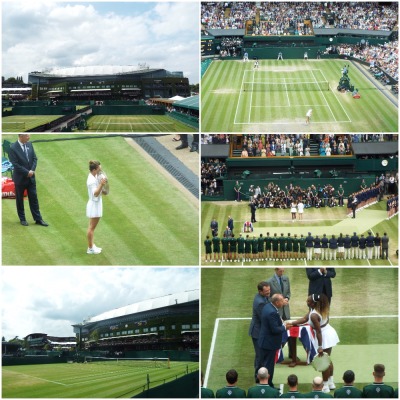 A top-six weeks as usual and  I can’t wait to do it all again next year.

Signing out from the (European) grass-court campaign.