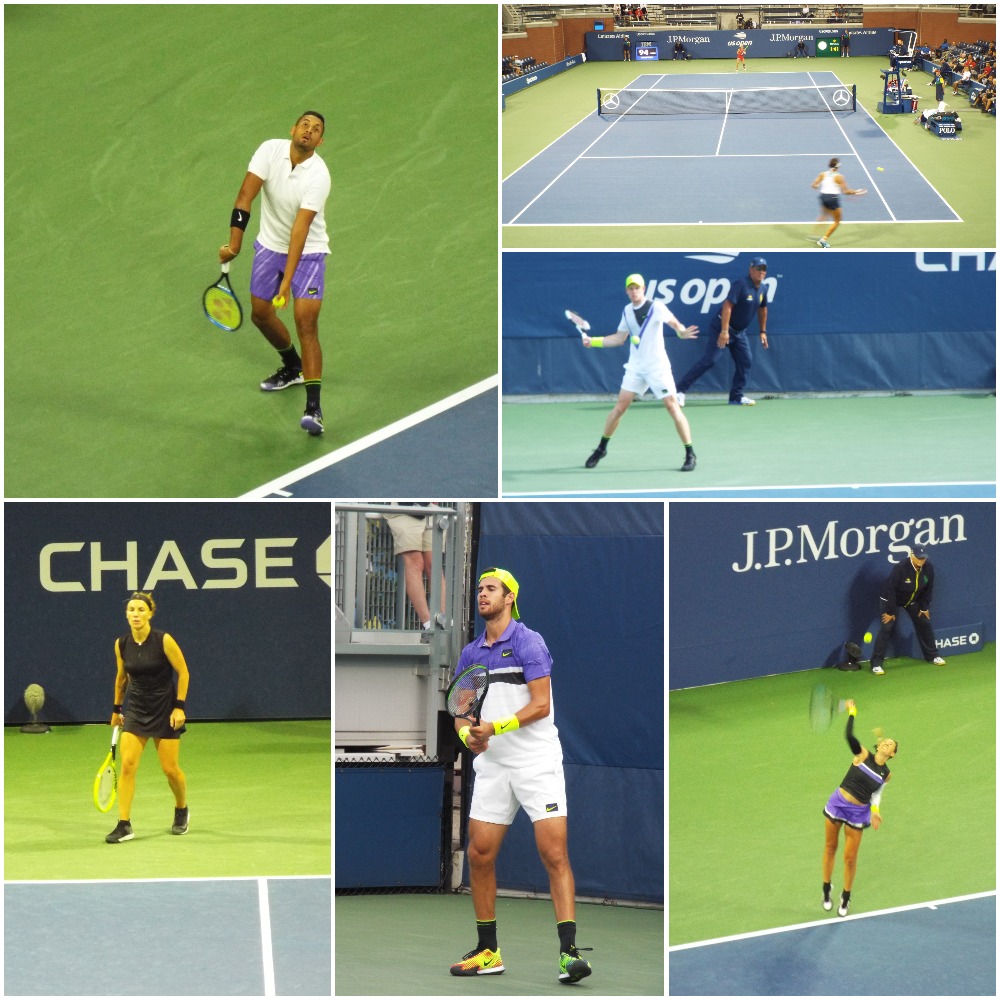 After a hectic first day, I took the pressure off myself yesterday. I had a few errands to run and get some things done before the tennis, so I casually sauntered up to Corona Park. Sadly I was too late for Tsitispas against Rublev where the Stefanos went in four sets and referred to the umpires as ‘all weirdos”. It was another long day, which culminated in being on the Louis Armstrong with Sabalenka/Vika and Nick against Stevie Johnson.

I picked up Kyle Edmund against Pablo Andujar, Kyle was two sets to one down when I joined it. It looks pretty clear that he is suffering from a lack of confidence at the moment. This was a match he should have won in the end, having taken an early lead in the fifth but from 2-0 up in the decider he lost six games in a row. It was very harsh on him. I thought he gave it absolutely everything. Like with Paolo Lorenzi yesterday, Andujar isn’t going to go away in a hurry. A fair few think Edmund overachieved in 2018 but even if that is true, you would expect him to win these type of matches.

It was then off to pick up a bit of Karen Khachanov against Vasek Pospisil. This was another surprise. I wasn’t expecting Pospisil to play to this level here, it has been a while since I have seen him operate at these kinds of levels. Ultimately here, he won the battle of the big forehands and when push came to shove it was the Russians backhand that broke down first in the decider. Khachanov is expecting his firstborn soon, so I am guessing he was out Flushing Meadows there as quick as he got off court. Pretty clutch from Pospisil, rolling back the years.

Then it was onto another of my cover bets, which on that side of things was a day that went pretty wrong. Svetlana Kuznetsova didn’t look right against Kristie Ahn. The number of errors made Federer’s first set against Sumit Nagal look minor. Then the Russian called for the trainer and had a lengthy timeout, it looked like treatment on her back. I did read that Ahn hit like 17 forehand winner to no backhands. The American was playing well but Kuzzy just wasn’t right here and went 7/5 6/2.

I saw that Aliona Bolsova was into a final set against Wimbledon semi-finalist Barbora Strycova. Bolsova caught my eye in more ways than one at the French Open this! Great tats on her arm too. She hits her forehand so well and caused the upset here by taking it 6/3 0/6 6/1. It sounds like she is in quite a lot of pain though after rolling over on her ankle. You could see this win meant a lot to her. I think it will be interesting to see how far the 21-year-old can climb the rankings and it is a player I will be keeping tabs on.

Whilst this was going on I was keeping an eye on the Sabalenka v Azarenka match, so I was straight over to that on the Armstrong, where Vika led by a set. The thing with these type of matches are they are unpredictable, you have Sabalenka playing her hero and both having the extra pressure of being Belarussian, playing one another (ask Felix how he felt against Shapovalov). There was some sublime hitting and some obvious nerves from both sides of the net. After Aryna fired a few winners to level the score up it was Vika who drew first blood in the decider but as with Edmund, it was short-lived. Sabalenka raised her game again by breaking back with some ultra-aggressive tennis and then broke her hero, who was serving to stay in the match a few games later. Unreal that this was a first-round contest, you would expect this to be at least a last 16 or last 8 encounter. A big, big win for Sabalenka mentally this one.

The fact that this ran over two hours meant a late start for Nick against Johnson. I had to hang around for a bit of this, despite the time. Would Nick fancy it at this late hour? Could Johnson take advantage? What would happen with the crowd? You know the type of drills. As much as I like Nick I was surprised that he had a large, large majority of the crowd on his side, playing an American. Especially as Stevie J comes across as one of the good guys. It made for an interesting atmosphere and a good one. It was pretty level early on with both players coming out well. The turning point was in the first set when Kyrgios faced break points at 2-3. He blitzed down a couple of huge serves and the broke next game with some scorching winners. Some of the shot-making was incredible. Either raw power or genius as he proved with the single-handed backhand pass. I had to leave midway through the second, it was going to be gone 2 am when I reached my hotel already. When I came back to see Nick had a mandatory row with the umpire and Johnson had told him to “play f**ing tennis”, I regretted leaving. Primetime all round. Nick was fully on this last night though. Impressive stuff.

As I mentioned earlier, it wasn’t my finest hour that I have had with my tips. Aside from what I have mentioned, Dominic Thiem was not lying about the virus or overplaying it. My fault, it wasn’t like he didn’t say in the build-up. Fingers burnt as he lost to Thomas Fabbiano. Bautista Agut also lost to Mikhail Kukushkin. This was a nasty first-round too but one I would have expected him to grind out. He didn’t. Carla Suarez Navarro retired against Timea Babos with a back injury.

Elsewhere the top seeds were generally fine apart from Sloane Stephens who lost out to Anna Kalinskaya, the ranking will suffer a bit here. Surprising that Sloane couldn’t raise her game a little bit as she is a big match player. There were no upset for John Millman this year either. Rafa comfortably took care of him.

Onto day three. Come on Rena and Evo! let’s do this!