This was a blog that I intended to post last Friday, but with the birth of my first son it has come out slightly later than planned. I’m sure you will understand. If my lad wants to become a tennis player he will be given plenty of encouragement and support from this side. Betting firms be ready to dish out a few speculative quotes!!

On that note – With the End of year finals at London’s o2 arena just underway, there is a part of me that wonders if this event has been taken for granted. Particularly in the latter years. Let us not forget, this is exactly as it’s labelled. The ATP Finals in an extremely prodigious and lucrative event. It is an event I have attended regularly but I don’t speak for everyone. It is unbelievable to think this is the eleventh and penultimate year of it being held in London. Turin will be taking over in 2021. 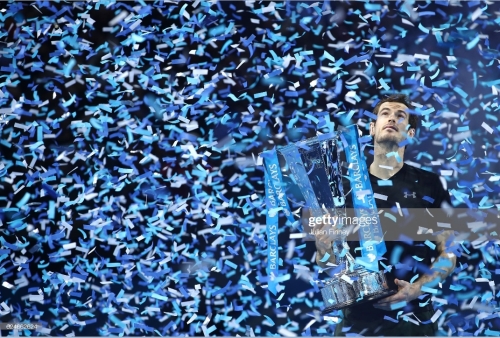 I personally think back to the days in the mid to late 90s when I was a teenager and was buzzing about the fact we had an ATP Tour event in Battersea. Outside of the grass-court campaign, we were and still are limited over in the UK for main tour tournies. The truth is that I thought Henman played his best tennis in the UK and more events made meant more success. I would have been pining to have this in England back then. He would have thrived on these indoors courts in London. Luckily we have witnessed British success with Muzza clinching the title and season-ending world number one ranking with it back in 2016. It should not be underestimated how big this event is and how lucky we have been to have it on our doorstep.

Let’s face it, this year’s line-up probably isn’t the strongest it has been on paper but it is by no means anywhere near the weakest we have witnessed either. Rafa, Djokovic, Federer, Medvedev, Thiem, Tsitsipas, Zverev and Berrettini. I am pretty happy with that this year. Experience v young talent. Some players haven’t been happy with the courts over the years and others have. You aren’t going to be able to please everyone at the end of the day. This may have sometimes meant withdrawals but let’s face it, we have seen that at grand slams and regularly on a weekly basis on tour. This is possibly one factor in some fans easing off the event though.

Touts have undoubtedly  played their part by trying to charge astronomical prices too. A little tip is to wait as late as you can and I mean up to 30 minutes before the sessions start and then book them. I’m lucky as I live in East London. Most aren’t so fortunate to have this option. I can jump on a tube and be there in just over half an hour. You can often get tickets up in the clouds for around £20-25 though. The O2 arena is on a similar level to the Arthur Ashe. It is both big and very steep but this means viewing from up with the birds has good visibility. It is well worth it.

It is important to support this event and make the most of it for the next two years. I think it will be a case of ‘don’t know what you have lost till it’s gone’.