I like Karen Khachanov but I was pleased to see Nick come through that today. It makes for that special ‘super-salty’ encounter with Nadal next. Khachanov is a player that can unquestionably give Rafa a game but I’m not sure he will right now in Melbourne. Will Nick? Maybe not but you fancy he will. You would be sure he would but the four hours plus today does make you think twice. We know he will come out fired up. As he says ‘that’s why you play’, it is matches like this that bring the best out of Kyrgios. I am really looking forward to this, it will surely be a night session match. There has been the usual needle here with Nick imitating Rafa during his win over Gilles Simon. Expect fireworks. 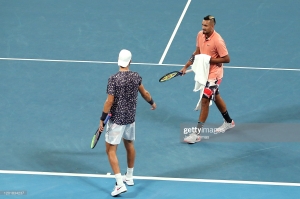 Nadal beat good pal, Pablo Carreno Busta, in a very one-sided affair and he is looking in good form. It will take all one of Nick’s finest performances to take-out Rafa here. Thiem dropped another set, this time to the useful Taylor Fritz. It hasn’t been stellar yet from ‘The Dominator’ but there have been glimpses of what he is capable of. The Austrian will play Gael Monfils next. I was surprised to see Monfils beat Ernests Gulbis so comfortably but then I haven’t got a lot right in Melbourne so far.
Daniil Medvedev was also a routine winner over Alexei Popyrin, who was suffering from a hip problem. Nice and solid from Daniil here though. He will play Stan Wawrinka next, John Isner retired with a foot problem a set and a breakdown. It will be a good test of Medvedev’s credentials here, he has a 2-0 over Stan with wins at Wimbledon in 2017 and last years US Open. The difference is this time he will be expected to win. It shouldn’t phase him, he seems to takes most things in his stride.

Good mates Andrey Rublev and Sascha Zverev will square-off in the fourth round. Rublev continued his unbeaten start to the year with a for set win over David Goffin, who actually served for a two-set lead there. Sascha Zverev won in straights against Fernando Verdasco. He really is benefiting from the other younger lads taking some of the spotlight off him. The fact he isn’t taking five sets every round is proof.
Anastasia Pavlyuchenkova is one result I did see coming here. Taking out the second seed Karolina Pliskova here is no fluke, her form has been decent and she thoroughly deserved this win. It was Pliskova that was struggling to stay with Pavy here. Angie Kerber will be here fourth-round opponent after she beat Camila Giorgi. I thought we might see the upset here but the Italian committed too many unforced errors in the end.

Garbine Muguruza is putting some form together now, 6/1 6/2 over Elina Svitolina! We have been here before with Muguruza, where she can look good before putting in a shady effort. We also know she is capable of stepping it up. So far, so good for the two time Grand Slam Champion. She will now play Kiki Bertens, who came through against the gutsy Zarina Diyas. 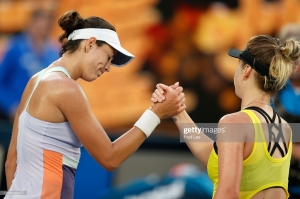 I am obviously surprised that Belinda Bencic got walloped by Anett Kontaveit 6/0 6/1. I don’t think many saw that coming. Bencic said that after an awful start she got tight and the Estonian was just hitting winners all over the gaff. Iga Swiatek is through to the fourth round, she is still yet to drop a set the 18-year-old Pole. Not bad going when she had beaten Timea Babos, Carla Suarez Navarro and now she has upset Donna Vekic. A good win that, I have said it before but the future looks bright for Swiatek.

It sounds like Simona Halep beat Yulia Putinsteva in just about every department. That is no real surprise though as she does just do everything a little better than Putitnseva. Very business-like from reports. Elise Mertens will be a bigger test next. She ended CiCi Bellis run and was pretty pleased with her performance. Bellis did force a decider but was well beaten on the day.
On we go.