I don’t know who to praise more here. Nole clearly doesn’t get enough appreciation in these situations, so I will laud him at the end of the article to conclude business.

Thiem was outstanding, yes he ran out of steam in the end but he really had Nole on the ropes going into that fourth set. When I say he ran out of steam it was just that the footwork and his level dropped a couple of per cent. There were few fears that he is on the verge of glory and this match only confirms that surely it is only a matter of time. He was ripping backhand and forehands winners with ease after taking control of the point and really peppering Djokovic. The fact that he was prepared to come in and trust his net game says a lot against an opponent of this nature. He is confident. 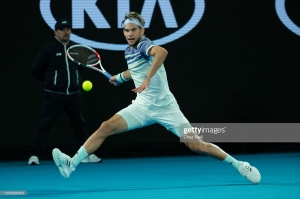 There were moments during the final where I thought we were going to see Nole ripping his shirt in anger, as he has been known to do, but he kept a lid on it. It was probably one of the decisive factors in this match. To come back from two sets to one down when your opponent is playing as well as he is and your not at your best as a result is a gift. I have to say that all I know is that if this was Rafa or Federer coming back there would be a lot of people buzzing about it. Nole deserves so much credit, he just sticks in there and pushes and pokes and usually reaps the rewards. 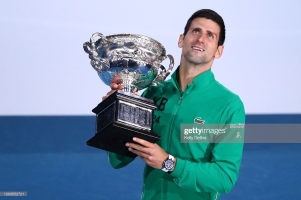 It does bring Nole back to within two of Rafa’s all-time record of 19 and  three away from Federer’s tally of 20. You do feel that if it is a straight race from now and the clocks were zeroed that Nole would win. How many is the question? On the balance of things and with age on his side, you feel he really should surpass the pair of them. That will make for many interesting comments and rows on social media but the facts will be the facts. On this front the pressure will be firmly on Rafa to win in Paris and Federer to nick Wimbledon, the latter though not impossible looks a bigger ask by the event. 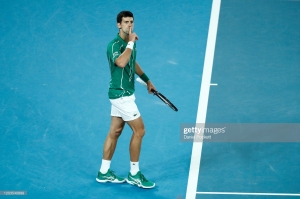