There are people who after reading this will be thinking it is part 1 of part 1. I would say fair enough but if nothing else I’m stubborn!

Approximately 19 years after my last competitive tennis match as a registered LTA member, I couldn’t take it anymore, I needed to be back on a tennis court in my late 30’s. Ronald Agenor anyone?? Yes, there has been the odd cameo but nothing anywhere near a competitive level, just a knockabout with pals, that kind of thing. I haven’t even done that for well over 5 years though. I have always missed it, badly. More than junior football even. I have always had a competitive edge to me and in singles, the winner takes all, loser takes it on the chin mentality is something I have always loved. The individuality is something I thrived on. No one to take the glory off you in victory or push the blame on after a defeat.

I wasn’t a world-beater back in the day, I started playing events at 12 years of age and reached a ranking of 5.2 as a Junior. I played a lot of my tennis in the county where I was born and bred, Hereford & Worcester. I would say I was in the mix at county level. I beat plenty of county squad players and some half-decent ones at that but if I played the top few I would be delighted to get a 2 and 2 beating off them. They were at a totally different level to me. I won about 6/7 LTA singles events (plus a couple of plate events), so I could hold my own out there. I was known as a bit of a hacker, I would chase and hustle and get as many balls back as I could. I loved a target. I actually found a picture on Facebook from Leominster Tennis Club when I won a tournament around 22/23 years ago. Whoever posted this I am eternally grateful to.

I knew the game was up in my late teens. I wasn’t just losing to players I had beaten, I was starting to lose to players who in my ‘pomp’ I would have beat comfortably. The desire and fight my game relied on was ebbing away from me. Players wanted it more than me at that point and that wasn’t what I was about.

As anyone who knows me well is aware, I have always stayed close to following the tennis circuit after this, following the ATP and WTA Tours. It was a daily part of my job for 15 years and watching the sport has never failed to be anything short of obsessive. The time to play to any level has never been there though.

I think some people will think I’ll be waiting for a Wildcard from the AELTC in the near future. The reality is hopefully a bit of club level tennis and maybe the odd open event with the LTA on weekends. Even just one event would be an achievement when I think about it. It won’t happen overnight that’s for sure and it could be a question of playing the long game. The fitness has totally gone and I will have to modify my game substantially. Serve and volley basically!

To get the taste buds flowing, I thought it was time for some new equipment. I was straight on the Tennisnuts website and spending the cash, including tops, shorts, socks, headbands, wristbands, overgrips trainers, towel and ankle supports. Covid-19 has meant that I haven’t been able to test new rackets, so I have had to stick with the Tim Henman Slazenger pro-braided for the time being. Should be useful for the new serve and volley approach anyway! Anything that was good enough to see Tim through to a Wimbledon semi-final is good enough for me. 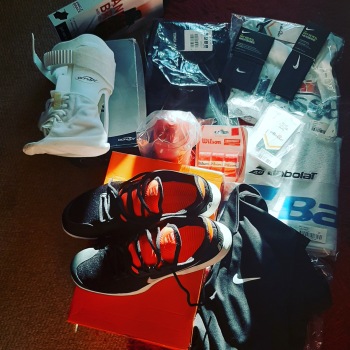 It was now time for a hit. I knew it couldn’t just be against anyone. I was going to have to play someone I thought would beat me in long or short, or at the very least give me a really good practice and test me. I am never going to get anywhere if I play someone that I could wallop straight away am I? Luckily, one of my pals is a very useful squash player, superfit marathon runner, who plays the (very) occasional tennis. The venue was South Loughton Park, Essex.

It felt great to be back out there. After a 30/40 minute hit, we decided to have a straight one set shoot out. I was actually surprised that although nowhere near perfect, I was hitting the ball better than I thought I would. I didn’t even have a case of the yips, which I assumed would be nailed on after so long. I even jumped into a 2-0 lead early on. Having been broken back and after trailing 3-2 though I knew my body was already starting to break down. I managed to take care of my serve for a few more games but I was really having to stay focused and literally take one point at a time. I was certainly using the imaginary serve clock to its full potential. Then at *4/5 and 40/15, the forehand started going awol and making errors as my pal extended the points. Probably a shot that used to let me down in the past when a little tight ironically. Four points later I was down and out. We tapped rackets at the net (not like Edmund v Evo this week). I then squatted, trying to fill the lungs with air but I was physically gone, a Sampras v Corretja US Open moment was not far away and I knew it. Only to be expected really. Despite this, I loved every minute of the session if I’m honest and can’t wait to go again.

We have already arranged another practice and rematch, so as time progresses I will find out how much he was toying with me here. In the meantime, I have tried to do a bit of running and cycling. I need to get in ‘some’ sort of shape or at least the best I can. It will unquestionably be the hardest part of all this but hopefully worth it in the long run.