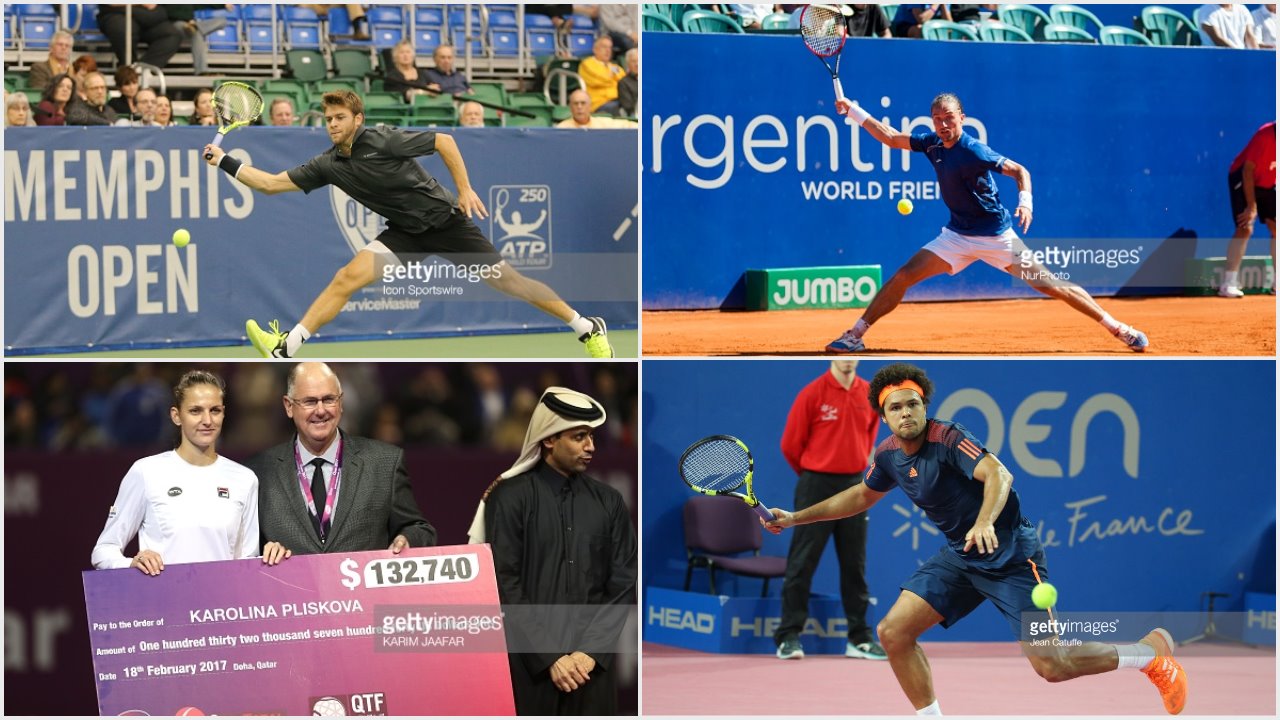 I remember seeing Ryan Harrison as junior at the French Open in 2008. By this time he had already beaten Pablo Cuevas on the main tour at Houston when he was just 15 years old. He was actually playing Andrey Kuznetsov back that day when I as there. My memory is a little sketchy apart from I knew he won a tight match. Turns out on research 9/7 in the decider. Checking the draw sheet also shows he was beating Milos Raonic in the first round. Raonic is a year and half older which at juniors is quite significant without meaning to state the obvious. So he could mix it with these boys back then when he simply wouldn’t have been as strong as them. It can be difficult to judge sometimes how this form will translate into the seniors. On the main tour, he seemed to have some form, mostly in the states as the years developed. He never quite kicked on, though. I used to feel watching him that expectation in his home tournaments was starting to weigh him down. I could be totally wrong about that but it was my hunch. His ranking dropped to nearly outside the world’s top 200 in 2014. Through his own hard work though he has got himself back on track. I saw 25/1 with one betting company pre-tournament here. This had been coming as well. He started picking up wins at the back end of last year on the tour. A Challenger victory in Dallas at the start of the month, where he has smashed up everyone in sight put him in with a great chance here. A tournament that has Big Ivo (Karlovic) and John Isner as top seeds represented a real shot at the trophy. That’s no disrespect to the top two seeds, but for as much as they can give anyone a run on their day, they can both be as susceptible to a shock themselves. Karlovic fell first up to Nikoloz Basilashvili. Isner went in the last 8 the ‘The Don’ Young in a final set breaker. Harrison and Basilashvili breezed through the final, neither playing dropping a set, Harrison ending Young’s bid in the last 4. Harrison looked very solid off the ground all week. Keeping himself in points and pinging forehand winners and big serves at key moments. In the final against Basilashvili, the Georgian just couldn’t break him, despite having a load of break opportunities come his way in the second set. He showed good mental strength and composure to close this one out in straights. From reports during the week, it was mentioned that Harrison has made a big effort to cut down his weight and started training harder in recent times. He is also engaged to Christina McHale’s older sister Lauren. It will be interesting to see how he deals with the limelight again with Indian Wells and Miami around the corner. He seems a lot more grown up now, from his interviews I saw last week in Memphis, he seems to have matured. Combined with his current work ethic and happiness off the court he should be able to cope with this side of it now. His next goal will be to reach the top 32, as he currently now stands at 43.

Jo-Wilfred Tsonga walked away with the title in Rotterdam. The Frenchman will probably feel he should have won back to back titles, but he blew up in the previous weeks semi’s against Alex Zverev after looking the real deal. He had no such problems all this beating Muller, Cilic, Berdych and Goffin the last 4 rounds. He says he is feeling good this year and he’s been in good nick. He has obviously been serving well as the comfortable victories over everyone but Goffin proved. Goffin’s poor record in finals continues but he has now reached the top 10 after his semi-final win over Pierre-Hugues Hebert. He did also record his first ever victory over Grigor Dimitrov, though in truth the Bulgarian looked to be suffering from playing a lot of tennis of late and this looked one match too far. I still think Goffin has to make adjustments to his game. He’s often far too safe for as good as his other attributes are. As for Jo, it’s a 13th tour title. We all love Jo lets be honest. He’s a geezer! Always great to watch his all court coverage. The game needs the charismatic Frenchman around, fit and winning.

Alexandr Dolgopolov flanked the form book in Buenos Aires. The Dog has had a slow start to the season after returning from a back problem, missing the rest of the last season after the US Open. This was a week thought where it worked for the Ukrainian, he found the balance. A week that consisted of Tipsarevic, Cuevas, Gerald Melzer, Pablo Carreno Busta and then top seed Kei Nishikori in the final. His brand of play in unplayable on its day, that much it true. He’s also great to watch. This comes at a price, though, you can’t have it all ways! His game is ever so low percentage. Infuriatingly so at times, you can often be left tearing your hair out at some of the guilt edge misses you see. But this wasn’t one of those weeks. Nishikori had been had pushed against Diego Sebastian Schwartzman and Charly Berlocq (a break up in third) but managed to survive. Worryingly for Nishikori, he has now lost his last 6 finals a stat I can’t say I was aware of until it was brought to my attention after this loss.

Karolina Pliskova won her second title of the year. Her only loss of the season remains her Australian Open defeat to Mirjana Lucic. It’s easy to look back on that loss now and put it down to nerves and a bit of inexperience. The rain poured in Doha for large parts of the week, culminating in some players playing back to back matches on days, Pliskova being one of them. She’s looking so solid right now as she now hunts down Angie Kerber for the number two spot in the rankings. Kerber worryingly getting beat AGAIN by the promising Daria Kasatkina, these are worrying times for Kerber at the moment. The form and most certainly the confidence have dipped alarmingly. This is certainly not the case for Pliskova with her power game currently. Cibulkova gave her a game in the semi-final but she dug deep when she looked to be physically struggling to edge home in the third. In the final she beat Caroline Wozniacki, having too much power for her. It’s a phrase that’s been used to many opponents of late because quite simnply it’s been true. She hits her opponents off the court with her big serve and flat hard groundstrokes. Wozniacki herself had a good week though and one that she will surely welcome as her form hasn’t been up to scratch this year. A win over Aggie Radwanska in second round being the highlight. The ladies go straight over to Dubai this week so let’s see who can back their form up for a second week in a row over in the UAE.