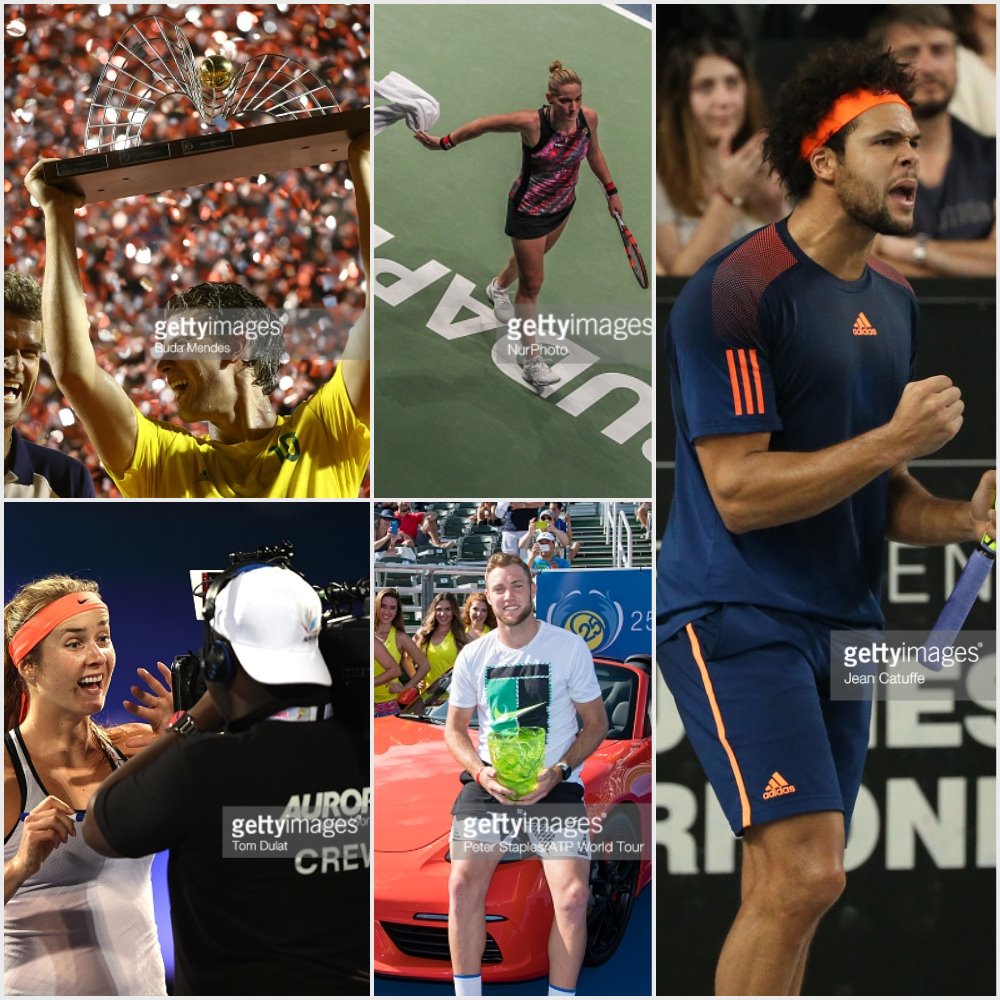 Elina Svitolina claimed her second title of the season with a victory in Dubai. The Ukranian backed up winning in Taipei at the start of February with an impressive run here. Her win, now takes her into the world’s top 10 for the first time. She dropped a single set all week against American Christina McHale. There is no doubt that she has hugely improved but there are still question marks hanging over her in the majors and until she shows a stronger mental side to her game and produces in one of the slams, there will still be questions asked. She still shows a little bit of inexperience, more so in a big game scenario. Her loss to Pavlyuchenkova at the Aussie Open earlier this year shows why she has fallen short so far. At 22, there is still plenty of time to tweak these things though, She cleaned up this week beating Kerber and then Wozniacki in the Final on her way to the title. Kerber has been complaining about her knee and was receiving attention for this during her defeat to Svitolina. It may well have been a reason for coming up short this week but this hasn’t been the reason all season. Wozniacki backed up last week’s performance in Doha by reaching the final again. The Dane took full advantage of Karolina Pliskova failing to back up after she lost first up to Kristina Mladenovic. Mladenovic has impressed me so much this year I actually thought she would have made the final from there, but Qiang Wang tied her up in knots in the next round. CiCi Bellis again impressed here after defeating Aggie Radwanska. The American eventually fell to Wozniacki in the Quarter-Finals, but there is little doubting her talents and it’s easy to forget she is still only 17 years of age. She’s only going to get physically stronger in the next few years which is only going to add to her attributes in a big way.

Dominic Thiem likes to get about that’s for sure. After trips in consecutive weeks to Sofia and Rotterdam, he flew out to Rio to play on the clay. This week he’s back on to the hard courts in Acapulco. So far it’s been fully justified after winning in Brazil. It was this time last year the Dominator started to become ‘a bit of a don’. Two titles from the three South American events last year propelled him up the rankings. It looks a strange change up in his schedule but one that might well work out again for him. He was certainly starting to rip that backhand again last week. His task was made easier after Kei Nishikori’s early defeat to Thomaz Bellucci. The Brazilian raising his level again here and then characteristically, dropping it again in the next round against fellow countrymen Thiago Monteiro and promptly losing. Nishikori was unusually bad-tempered doing a job on his racket and spraying frequent errors. He just seems to be lacking a little bit of confidence at the moment and he has proved susceptible on the South American clay in the last couple of weeks. Casper Ruud caused a bit of a stir by making the semi-finals, his firepower handing him wins over Dutra Silva, Carballes Baena and Thiago Monteiro. The 18-year-old threw away a golden chance against Pablo Carreno Busta in the semi, relinquishing a set and a break lead (twice), also having a match point on the way. The Spaniard running away with it in the decider as the teenager ran out of gas. Thiem improved as the week went on, having far too much weaponary at his disposal in the semi’s and final for Ramos-Vinolas and PCB respectively. Let’s see if this kick-starts his season. As we know confidence plays a huge part and he looks to be getting his swagger back.

Jo-Wilfred Tsonga continued his top form by winning in Marseille. It backs his claims a few weeks ago when he said he felt in good shape and thought he was playing really well. After winning in Rotterdam he virtually cruised through last week with the exception of his semi against Kyrgios. The Australian had Jo in a bit of trouble, but ultimately blew up when serving for the first set and tamely fell away in the decider. He saw off Lucas Pouille in the final, after the top half of the draw saw the French cavalry knock each other out. Monfils lost to Gasquet who then lost to Pouille. I’m a big fan of Pouille and he certainly goes well in his home tournaments. Tsonga proved simply too good in the final though as he bullied his way past his younger counterpart. He is full of confidence Jo right now and that’s great for the game, as I said last week this could now easily have been three titles in three weeks but for a complete lapse against Sascha Zverev in Montpellier. Let’s see how he gets on with the big boys again in Indian Wells.

Delray saw the top two performers make the final, where there was also a comeback tournament for Juan Martin Del Potro. Milos Raonic and Jack Sock were due to square off in the final before the Canadian withdrew with a hip injury. It’s something I have mentioned before that worries me with Raonic. I genuinely believe he is right on the verge of winning a slam, but keeping his body fit has been a huge problem for him and one that remains a huge concern going forward. This particular injury was picked up in his semi clash with Del Potro. The Argentine making the last 4 here in what will go down as a successful return. He was critical of the state of his backhand here though and says it needs to be worked on. Bernard Tomic put in another stinker, this time against Steve Darcis. I got sent a video from a pal with some of the ‘highlights’ from this where it was deemed he was tanking. In truth, he probably was but by his general demeanour, it’s impossible to tell for sure. He can often look lethargic so when he’s having a stinker I think it makes him look like he’s even less bothered. Either way as hilarious as I find his behaviour he really does need to sort this out. Maybe he should take a leaf out of Sock’s book, he’s looked extremely impressive of late and made his way through to the final with minimal fuss, making this his second title of the year after winning Auckland earlier on. Donald Young made his second semi-final in successive weeks losing to Sock this time out. Now you think of it, Tomic could possibly do worse than ask ‘The Don’ for some advice. Someone who has suffered a lot of criticism himself in the past, for his application to the game having had a stella junior career. I also got a WhatsApp during this tournament to confirm I wasn’t seeing shit, when on the ATP/WTA scoring app it showed that Jesse Levine had taken Raonic’s place to play Sock in an exhibition. Cant find the damned result though!!

With the exception of the Fed Cup, Timea Babos had not won a match this season. She went into her home tournament in Budapest as the top seed and can’t have been feeling great about her chances, having lost her last 8 main tour matches. Having said that, the top three seeds all made the semi’s in the end. Babos completing a great week with victories over Julia Goerges and Lucie Safarova, coming from a set down in the final on the faster than expected surface over in Budapest. In the finale she moved her opponent all over the court, keeping great length on her ground strokes and landing the first blow more often than not as the match progressed. Having said that she was also moving well in rallies, especially when on the defence. The home support certainly helped her, but that was down to the Hungarian using it as a positive instead of letting it add to the pressure as the top seed. Players either embrace that pressure or totally fold. Props to Timea.