I am very disappointed with the way Julia Goerges went out today. Alize Cornet is a tough nut to crack and quite often raises her game and she did that today. Goerges was error-strewn though and the 15 match streak comes to an end. Cornet played well but this will go down as a big chance missed for Julia and you never know if/when the next chance will come. It was more like the Goerges of old this performance. Cornet says she has a thigh injury but won 6/4 6/3 and now faces Elise Mertens. The impressive Belgian took out Gavrilova from *0/5 in the opener to progress 7/5 6/3. She is riding high off her triumph in Hobart.

Belinda Bencic failed to back up her early season form when she got blitzed 6/1 6/3 by Luksika Kumkhum. It is becoming apparent that Kumkhum is exceptionally underrated and she will fancy her chances against Petra Martic in the Last 32.

Elina Svitolina failed to impress in beating Katerina Siniakova from a set down. I suppose you just have to get through these, so it’s not doom and gloom for the tournament jolly. Siniakova is decent but has that ability to blow up at times and that’s what happened today. Svitolina faces the 15-year-old Marta Kostyuk also from Ukraine, this is some story really, good effort! Kostyuk struggled with the heat badly in her 6/3 7/5 win over Olivia Rogowska but hit her way through. Svitolina has also said she has some physical issues.

I did mention in my preview that Denisa Allertova’s results in qualifying had caught my eye and she beat the conqueror of Sloane Stephens today, Shuai Zhang. A third-round encounter with the Pole, Magda Linette awaits after she upset Daria Kasatkina. By all account, the 20-year-old wasn’t  at the races today.

Caroline Wozniacki survived somehow in the middle of the night. Saving two match points in a 3/6 6/2 7/5 victory and Coming from 1/5* in the decider against Jana Fett. Reports suggest she wasn’t that aggressive and that coupled with the heat is obviously concerning me. She knows she is in the tournament after that today, it can be a good thing. Kiki Bertens next. 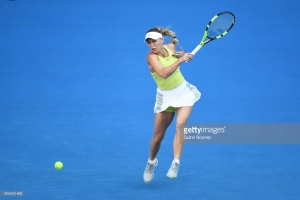 The other winners today were Jelena Ostapenko, Anett Kontaveit, Kaia Kanepi, Carla Suarez Navarro, Kateryna Bondarenko and Maggie Rybarikova. Ostapenko v Kontaveit next round should see some big hitting for sure. Kontaveit will look to give as good as she gets. 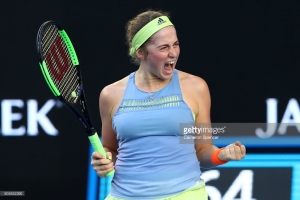 Rafa was given a good work out by Leonardo Mayer today and the 6/3 6/4 7/6 win puts him in good stead for his toughest match to date in the third round. Damir Dzumhur is a level above what he has played right now and let’s see if he can get into the match against Rafa. Their only previous encounter was in Miami 2006 when Rafa pulled out at 3/0 down in the decider. Dzumhur beat John Millman today and we now get to see the two street fighters go toe to toe as a result.

Diego Schwartzman had too much for Casper Ruud, running out a 6/4 6/2 6/3 winner. This was a game too far for the young Norwegian. Schwartzman will play Alexandr Dolgopolov in another match I will be looking forward to. I love Diego, as we know, plus ‘The Dog’ is always great to watch when he is playing like he is. A shot making match this one!

Grigor Dimitrov looked in a lot of trouble against Mackenzie McDonald today. He found himself a set down and received a bagel in the fourth before winning 8/6 in the decider. Not vintage at all today from Grigor and he will have to play a lot better against Andrey Rublev. I am starting to fancy Rublev for this one, will Dimitrov up it? Absolute cracker of a match awaits us here. Rublev beat Marcos Baghdatis in four today, showing his usual firepower. The Russian needs to cut down on his double faults ever so slightly though.

Nick Kyrgios made reasonably light work of Viktor Troicki, 7/5 6/4 7/6. Another good performance, though he failed to serve it out at the first time of asking. I still like his chances at the moment. A big test against Jo-Wilfred Tsonga in the Last 32. Tsonga coming from two sets to one down against Denis Shapovalov. This will surely fill the prime time telly slot and you cannot argue with that!

Kyle Edmund has done an absolute number on Denis Istomin. A comfortable 6/2 6/4 6/4 victory tells the story with the youngster particularly pleased with his game. Edmund didn’t even have to save a break point, so convincing was today and he will fancy his chances against Nikoloz Basilashvili.

Other players that made it into the winner’s enclosure were Marin Cilic, Ryan Harrison, Pablo Carreno Busta and Gilles Simon from the top half and Andreas Seppi and Ivo Karlovic (12/10 in the decider against Yuichi Sugita, from the bottom half. I think I read Cilic dropped five points on serve all match against Sousa, that is impressive and much better than his previous effort against Pospisil. Pablo Carreno Busta progressed after Gilles Simon retired with both quadricep and adductor injuries.