Hubert Hurkacz came out and gave Novak a nice workout today. The Pole is someone it looks to be worth keeping tabs on. He seems to be slightly less fashionable than some of the younger lads coming through but this boy can play. He couldn’t quite keep his high level up after he tied the match at one set all. This is usually the problem for players as Djokovic remained dialled in, but he kept Nole on his toes. I will be expecting Djokovic to start slowly upping it from here on in. Ugo Humbert is his next opponent, the Frenchman put an end to Felix Auger-Aliassime’s run in straight sets. This didn’t surprise me that much. I think FAA has been struggling this week and Humbert said having the benefit of playing on Court One against Murray in the doubles was crucial for him. The Frenchman knew his way around the court. 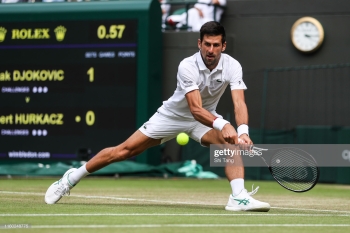 David Goffin has beat Daniil Medvedev, I said I had started to change my mind on this one from my initial pre-Wimbledon views. The Russian did blow up mentally from 4/1 up in the decider which culminated in having a row with the umpire at 4/4. Fair play to Goffin though he is playing well on the grass and is certainly starting to find some of his bests form again. Goffin will face Fernando Verdasco on Monday after he put an end to Thomas Fabbiano’s decent form of late. 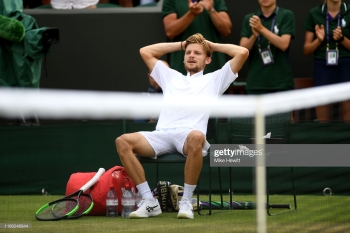 It goes to show just how slow the courts are playing again as Guido Pella brilliantly ousted last years runner-up, Kevin Anderson in a comfortable straight sets. Some of the points Pella played here were worldy’s. Once in the point against the big South African, he was always favourite. I don’t think Anderson is back to full fitness yet after this but even so, what a performance from Guido. He will face another huge serve now, in Milos Raonic. Opelka admitted after his straight-sets defeat today that he had picked up an adductor injury against Stan. Raonic had to just be tidy and solid today, which he was to get the win. 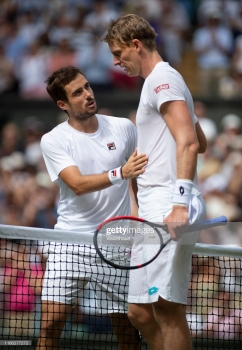 Roberto Bautista Agut continues to impress, he properly took care of Karen Khachanov 6/3 7/6 6/1, the only concern was a fall in the third set. Let’s hope he is fine. Khachanov just couldn’t contain the low bouncing balls and it has been very, very good from the Spaniard so far, he is yet to drop a set. He faces Benoit Paire next after he beat Jiri Vesely in four. I thought Vesely would win this but after going a set down Paire fought back. There is a different mentality about him these days and he said as much after.

Coco Gauff certainly wasn’t at her inspired best against Polona Hercog. She trailed by a set and 2/5 and saved two match points on her way to a 3/6 7/6 7/5 victory. What she did show was plenty of fight and mental strength to turn this one around when it looked lost. It is easy to forget with all the commotion of the first week that she is still only 15 years old and that was her first outing on Centre Court. Impressive to keep it all in check when it wasn’t going right. Simona Halep is her fourth-round opponent after she hammered Vika Azarenka. Vika didn’t really turn up here and this was done in just over an hour, she is desperately trying to find that consistency again. Sadly, we are not there yet. 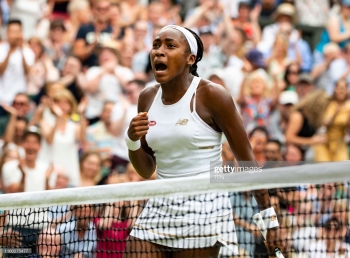 Caroline Wozniacki’s loss to Shuai Zhang came as a bit of a surprise. Zhang’s form here is no fluke though as she has been on fire in every round. She had not won a main draw match at Wimbledon before this year but her aggressive approach is tearing through the field. I think she will like her chances against Dayana Yastremska next. The Ukranian says she is having a few problems with her shoulder. Caro wasn’t pleased about hawk-eye in her match against Zhang and she looked to have a point that even the umpire agreed with. 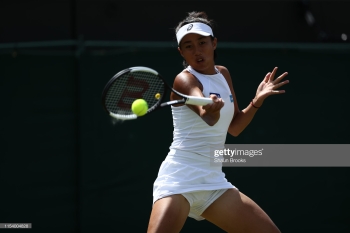 Karolina Pliskova survived a scare against Su-We Hsieh. This got interesting after the first set when Su-Wei really joined the party. We know what she offers and this is a very good win for Pliskova against an opponent that is an utter nightmare for her. She dealt with it though and will now play fellow Czech Karolina Muchova, who beat Anett Kontaveit. Pliskova beat Muchova at the Aussie Open this year.

Finally, Elina Svitolina beat Maria Sakkari. She could have wrapped this up in two but Sakkari fought to take it the distance. I am obviously still not convinced with Svitolina’s credentials here and she will be tested again in the next round against Petra Martic. Martic once again won in three sets (as in rounds one and two), this time against Danielle Collins. What Martic has had so far are consistently decent opponents and she has fought through each of them. Collins, like Martic, has a lot of variation to her game so this was a different sort of victory for the Croat but another good one. 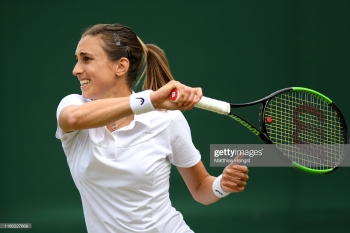 I am on Court One today and am nervous as hell! Come on Rena and Up the Evo!!