Two players that clearly look to be getting closer to Grand Slam glory are Dominic Thiem and Stefanos Tsitsipas. Both play an exciting brand of attacking tennis, with classy single-handed backhands and powerful forehands. Artists you could say. Importantly, their records are generally very good against the ‘Big Three’.
Thiem has certainly taken steps forward in 2019. Winning in Indian Wells and then his run to the final of the French Open, where he defeated Djokovic in the semis shows he is moving in the right direction. I think it was more impressive than the previous years run in Paris and he really stepped it up from the last 16 and gave Rafa much more of a match in the final. His Grand Slam results don’t tell the whole story for him in 2019. The Dominator wasn’t right in Australia, he was fatigued going into Wimbledon, where he lost to a very decent opponent in Sam Querrey in the opening round and he had a virus going into New York. So, for me, there is no major concern there. This a guy who can play on all four surfaces, even grass.

I see Tim Henman was tipping Thiem up for the French in 2020. I certainly feel he will be closer to Rafa by that stage. Will it be enough though? Time will tell. Most importantly though you feel that the Austrian feels he is getting closer himself and that’s huge psychologically. The French Open isn’t the only option as I have already stated. His head to heads last year were 1-1 against Nadal, 3-0 against Federer and 2-1 against Djokovic. So, no losing records there. Things certainly seem to be going the right way and at 26 he will be approaching his prime. Theim looks ready.

Stefanos has a bit more time on his side at 21 but there were some big strides again. It has been incredible to kick-on the way he has after last year (2018). Is next year too early? Probably yes, but like with Thiem the belief and the mentality are there. The way he took Federer out at the Aussie Open shows there are no problems on that side. As was the way he claimed the ATP Tour Finals at the O2 Arena, where he beat Thiem in a high-quality final. Like Thiem, you feel he can play on all surfaces to a high level, making him a threat across the board. 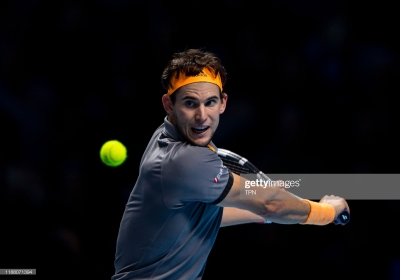 Both Stefanos and Dominic seem to be better over five sets than Sascha Zverev and as a result, look better equipped to take the next step right now. It will be interesting to see how Medvedev gets on next season after what was a sensational year for him. If he can reproduce, it is clear he will be a menace. Players like Berrettini, Shapovalov, FAA, De Minaur, Khachanov and Rublev will look to improve again to make the potential step-up. If they look at the Austrian and the Greek’s models then they won’t go too far wrong.
Andy Del Potro