2019 has passed and we are still waiting for number 24. We have been so close, all that we are missing is that elusive legendary performance in a slam final one last time. 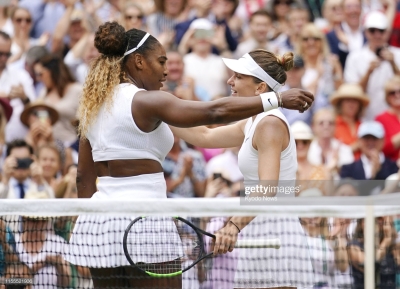 I was courtside for a chunk of Rena’s matches at Wimbledon both this year and last but was also out there for both finals against Kerber and Halep. Likewise, I was at the last two US Open’s, though not there for either final in NYC. The losses have been hard to take at times. I don’t think I have exited the AELTC grounds quicker than I did after the Kerber loss. The Halep loss was equally as frustrating for everyone concerned but for me, I had gained experience from 2018 and tried to learn from it. It still didn’t take me long to leave after that one either mind. A good quick sulk doesn’t do anyone any harm, does it?

What is frustrating for not only us but even more so for Rena and her Team is that she is so close. It is not that we are talking early exits in the majors. We are there. We can smell it! We haven’t had a defeat like against Razzano or Craybas. Maybe it’s what we need for that extra push? I’m not suggesting I want this to happen. I certainly don’t. I would much prefer her to come out in Melbourne and stick it right up Margaret Court. Fingers crossed.

The thing is, there may be a few who are brave enough to claim she won’t win another slam but the truth is people aren’t totally writing her off due to how close we have been. I think Serena responds best to being written off in the press personally. I hope we don’t get to that situation but if we do she will really want to prove the doubters wrong. More than ever.

It is a (very) very mini version of Liverpool FC who I support. Though not comparable in terms of length of drought for the Premier League title, this is also starting to feel like an eternity, so desperate are we for success. In truth, it is absolutely ridiculous to think like this. Serena’s return is remarkable and any other player would happily take the results in the same scenario. It is only because we are talking about Serena Williams here that second is simply not good enough.

She goes to Auckland at the start of the year where she lost to Madison Brengle last time out in 2017. She went onto win the Aussie after that without dropping a set and we later found out she was also over 8 weeks pregnant whilst winning it. Incredible! It’s fair to say id take the early loss at Auckland for a repeat in Melbourne.

‘Experts’ think the French may be a step too far these days. Personally, I think that depends on how much priority Rena puts into against the other three majors. As it stands the other three could potentially be seen as better opportunities for her and that is fair enough. I always fancy her chances at SW19 and probably always will. She is still the bookmaker’s favourites for the Aussie, Wimbledon and the US, so let us reassess this in a years time, where a lot could have happened. We go again.