We ended up getting a barnstormer in the ‘super-salty’ sequence. I am pleased Nick made a real fight of it. He really left it all out there. To beat Rafa, which we know Nick can, he has to be right on it and maybe he is just a couple of percent away right now. It is really fine margins as losing the third set breaker 8-6 proves. He didn’t throw in the towel then though after he had gone a break down in the fourth, instead he broke Nadal back when he was serving for the match. Great effort. In fairness what a performance from Nadal though, whenever there is any extra bite in a match Nadal is at the front of the queue. It was more a testament to Nick sticking with him today. I am sure Kobe would have approved. 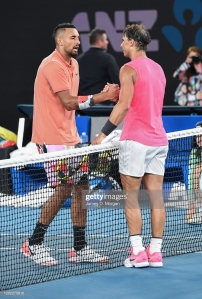 Rafa will now face Dominic Thiem, who beat Gael Monfils. Again. It is now a 6/0 head to head. It is fair to say this matchup suits the Austrian and when Monfils is far too far behind the baseline this is what happens against an opponent of Thiem’s quality. He can construct the point before hammering home the winner. Monfils was pretty annoyed with himself after in the interview, saying he needs to ‘seize the moment’ when it presents itself.

Sascha Zverev really is sneaking through here, though it is not so much sneaking now after beating Andrey Rublev in straights. The Russian suffering his first defeat of the season. Zverev has certainly settled in life again now and the performances are showing as much. He will now play Stan Wawrinka who came from two sets to one down to beat Daniil Medvedev. I though Daniil had turned this around when he lead going into the fourth but it was Stan that kicked on and Medvedev who looked the more tired. 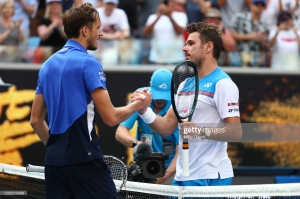 Garbine Muguruza says she isn’t over her illness yet but I wonder if that is just one of those statements to ease the pressure on herself a little. She has had a fever. She comfortably ousted Kiki Bertens in pretty much every department to book a quarter-final against Anastasia Pavlyuchenkova. The Russian is nearly the only bet I have left on this after she beat Angie Kerber. She hit an incredible 71 winners today against the German. Muguruza will go into this as a slight favourite about 4/7 and rightly so, but Pavy is pretty happy with the way she is playing at the moment. She has been working on her focus and that is obvious but can she make her first Grand Slam semi-final is the big question?

Simona Halep appears to be cruising still after beating Elise Mertens 6/4 6/4. She seems to be handling everything that is being thrown at her in Melbourne but I still think she is susceptible. I’m not sure it will be Anett Kontaveit that will beat her though. The Estonian just about got over the line after nearly fluffing a 5/1 lead in the decider to Iga Swiatek. The 18-year-old Pole showed plenty of fight to get back in this when struggling physically and she looks a real threat going forward.