I think it is really important to say first that Naomi Osaka played an absolutely fantastic match last night. She did everything really well and her bottle was shown in full when serving this out. From start to finish she played an incredible match and she didn’t deserve to be caught up in what unfolded in front of her, something Serena pointed to after the match had concluded. She was a worthy Champion and nobody should say any different, and they won’t. The better player on the day certainly won. It is sad that her performance hasn’t got the write up it deserves here. Is that Rena’s fault? Absolutely not!

I may get hammered for my views on this but opinion makes the world go round and I believe I can back it up. Plus, I think my actions would have been pretty similar as I have a habit of sticking up for myself, especially if I feel I am being treated differently. Only the people close to me probably know this, but trust me it is true. That is how she felt. There was zero leeway given at all last night. If people can tell me they honestly think that is how it is on tour then WOW. I must watch different matches.

Social media has totally gone off with this. There are people being ‘followed’ and ‘deleted’ all over the shop, I am sure of it. People are divided but at the same time, everyone including myself, think that there stance and opinion is right. Ex and current players are getting involved. Bille Jean King, Chris Evert, Andy Roddick, Jim Courier, Vika Azarenka and Ana Ivanovic had Rena’s back. As did Sascha Bajin, Osaka’s coach. Hantuchova and Rusedski in the Amazon Prime studio didn’t. Rusedski, in particular, has a short memory. Or is he just losing it totally? This is the man who managed to fit ”w*nker and several f*cks into an umpire when playing Andy Roddick 15 years ago at Wimbledon and took the £1500 fine. Different then was it Greg? As it was only 2003? He was classless as a player and that would fit in on my limited knowledge of him off the court, then and now. Tool. 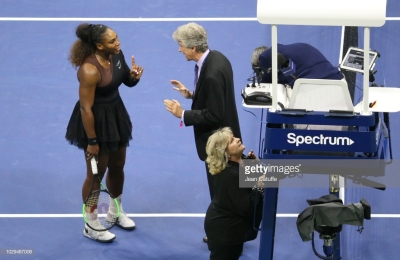 Rusedski and Hantuchova did admit that the coaching goes on all the time and that is where this all started last night. If it goes on all the time and it is apparently happening on the other side of the net here too then why is she circled out for this? I have had several non-Serena fans even say to me since that coaching happens all the time, so is it not a little bit strange that Umpire Carlos Ramos pulls her up for this in a Grand Slam final? Especially as it is anything but the norm for Rena, even when allowed.

Then we had the smashing of the racket and point penalty. Ramos seems to have wanted the limelight here. Do I need to make a list of players that do this and get away with it? If you follow tennis and understand a situation then you don’t need to be so rigid with the rules. I am not asking for special treatment for Serena, merely for the umpire to have realised the situation, which happens 95% of the time and 99% in finals. Or at least be consistent. It is a bit like good reffing in football by letting play go on for a foul and then coming back to a player and saying ‘hey, any more of that…’ etc etc. He was straight down on her like of tonne of bricks last night and she was furious about it. Something else he had zero tolerance in empathising with. If this is the norm and how every player male/female is treated now then so be it. I doubt this will be the case though as it certainly wasn’t pre-last night. All that aside what he did next was ridiculous in the context of the match, for all parties concerned.

To give the game penalty at *4/3 Osaka was absolutely ridiculous. If ”liar” and ”thief” are that bad I dread to do think how Ramos handles being called a “who*e” or when he’s told to “fu*k off” etc. Maybe Serena did go on and on about it, but that is what any player pretty much does in the same situation and the more than situation escalates the more the player will get verbal. Have others received this treatment? NO. Could there not have been a warning, I am damn sure in most cases that would have been the case. Ie ‘carry on like this and you will lose a game’. He just went for the jugular though. There was no leeway and despite what anyone says there is usually some.

It annoys me when people are saying she is wrong for saying Ramos was “sexist”. Let us look at the facts. When this happens in the men’s game does it escalate to that point? When rackets are smashed and verbals or even obscenities are exchanged with the umpire? You know the answer. Is she wrong bringing up about Cornet? It certainly backs her point up, it is true and nobody can argue with either of those. She was just fighting her corner whether you agree or disagree with it. Expressing how she felt.

The ‘sore loser’ comments also get to me a bit. Of course, she doesn’t like losing, she says that herself but who does? You must be some kind of tennis player if you take losing well. The way she greeted Osaka at the end of the match and during the post-match interview was with class and dignity. If she was that much of a sore loser then I don’t think she would have that in the locker. Her actions weren’t one of bitterness but of someone who felt they were being treated differently. The affection shown to Naomi after proved this in abundance. The sincerity was there for all to see. 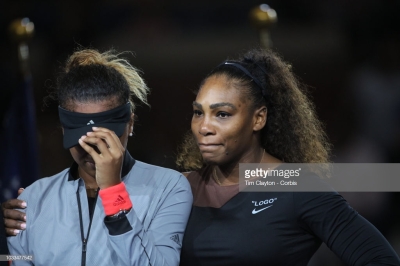 She is very emotional at the moment and has always stuck up for what she believes is right. Even her passion and drive came through about her opinions on all this yesterday and with that comes a fantastic player and one that is the GOAT.

However, Naomi Osaka deserves all the credit she will get for winning her first Grand Slam. It is pretty obvious that there will be more and this performance was no fluke. It would have just been nice for the game penalty not to have been given, this took a bit of the gloss of it. She deserved to serve it out from *4/3 on merit as her performance warranted that. Her focus during all this whilst playing her hero was quite phenomenal. Congratulations Naomi.