With Fabio Fognini pulling out with a right leg injury, the question was whether Stefanos would keep his level high enough to see off the competition in Estoril? Losses to Medvedev (Monte Carlo) and Struff (Barcelona) had raised a few question marks as to his level currently. It was high enough in Portugal, though he was certainly nowhere near his best. Stefanos is learning the art of ‘winning ugly’ basically. Joao Domingues gave him problems and David Goffin took him the distance in their semi before Pablo Cuevas was edged out in a second set breaker for the title. 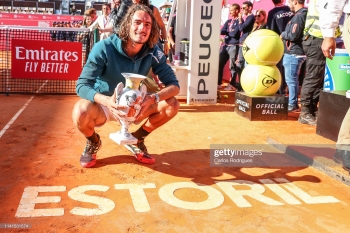 Cuevas has come in as a lucky loser and took full advantage of Fognini’s withdrawal. Taking out Frances Tiafoe and Alejandro Davidovich Fokina in the quarters and semis. Fokina put in a top effort having got through qualies, making his first tour semi, beating Monfils on the way. The Frenchman playing his first event since Indian Wells. For Fokina, the 19-year-old was Junior Wimbledon Champion in 2019 and is certainly one to watch. Fitness became an issue as the week went on but that is just part of the learning curve.

Top seed Alexander Zverev came into Munich with a lot on his plate. Rumours of Lendl being away, his dad being sick for a few days, a row with his management (which has got messy), a split with his girlfriend and talk about his ‘additional’ weight. That’s a lot in fairness if true. His game certainly isn’t right and he was dispatched by the impressive Christian Garin. The Chilean backed up his win in Houston to claim a second title in less than a month. He really seems to know how to play on clay and is one of the most inform players on tour right now. Garin could have beaten both Zverev and then Berrettini (in the final) in straights, but when he missed the opportunity he dialled in again to the deciders to get the wins. That’s impressive. Schwartzman and Cecchinato (semis) were both dismissed very comfortably by the Chilean.

Berrettini was looking for back-to-back titles having won in Budapest and only just came up short in the final, losing a final set breaker. There were good wins over Kohlschreiber and Bautista Agut, but the weather caused havoc in Germany and the Italian found himself playing twice on Sunday. Kyle Edmund’s bad run continued as he lost to Denis Kudla in his opener.

Jo Konta had a successful week on the red clay in Rabat but came up just short in the final against Maria Sakkari. This was Sakkari’s first tour title as she wore Konta down 6/1 in the decider. She came back from the brink against the Brit who looked tired as the match progressed. Konta had some struggles on the way against Wang, Bogdan and Su-We Hsieh before surprisingly beating Alja Tomljanovic pretty easily in the semis. 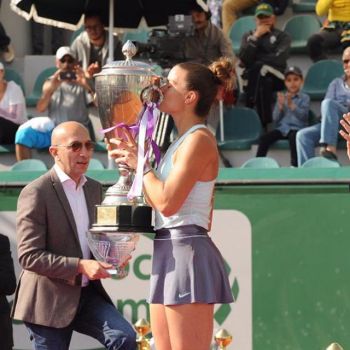 Sakkari came through the draw without dropping a set until the final, taking out top seed Elise Mertens in the last eight. The Belgian did look to have a shoulder injury late on there. Sakkari though, is the first Greek female player to win an event since Eleni Daniilidou, back in 2008. This win moves her back up to 39 in the latest rankings.

Home hopes in Prague took a major dent when Karolina Pliskova and Marketa Vondrousova both withdrew pre-event with a viral illness. It was disappointment for the home support as Jill Teichmann stepped it up, the 21-year-old was born in Spain but represents Switzerland. She eased her way through qualies in impressive fashion beating Tomova, Haddad Maia and Allertova to reach the main draw. There she battled past Svetlana Kuznetsova and then overpowered Barbora Strycova 6/3 6/0 in the semis. In the final, she defeated local wildcard Karolina Muchova, who led the line well in her home event. Teichmann was on it all week though. 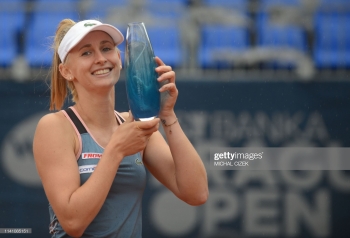 Muchova gutsed it out against Iga Swiatek and Jennifer Brady and then hit through Vikhlyantseva and Pera to make her first tour final. Second seed Anastasija Sevastova fell at the first hurdle to Anastasia Potapova, the talented Russian just getting edged out by Vikhlyantseva in the next round.